For those of you who use a mouse, what are you using and why do you like it? Any trackball users out there? Looking to ditch my Magic Mouse for something more comfortable that also doesn’t look too garish. A lot of the gaming mice have way too many buttons for me.

I’ve been very happy with the Logitech Marathon wireless mouse, it really does get the battery life they claim. …and I find it comfortable.

I’ve been using an Elecom HUGE trackball, the wired version. I can just lay my whole hand on it and mouse around with 2-3 fingers while using my thumb for the main buttons and scroll wheel. 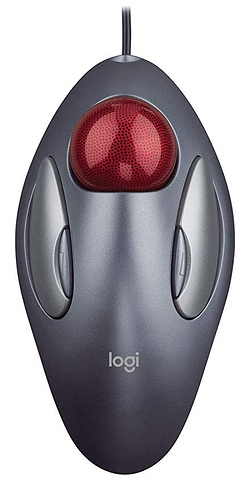 this thing is pretty comfy and not too garish imo, been using it forever and have never had any issues.

The Logitech Trackman seems to be the quintessential trackball mouse. How is scrolling up and down on this? Do your hands rest on the buttons without worry that you’d click them accidentally?

the little inner buttons scroll down and up, respectively. Usually requires installing third party software/drivers (on osx at least?), but works pretty well.

Hands rest pretty comfortably on the buttons but I haven’t really had issue with misclicks. I don’t know if it would be good for serious gaming or something like that, but for daily use it’s good.

This is the most ergonomic for me. Super fast and accurate too.

Argh, hate the magic mouse. Or any apple produced mouse. For a company that rather famously made it’s mark in the world with a computer that depended on a mouse, they never really managed to produce any good ones. The best apple related one I’ve had is the one that came with my NeXT computer.

I’m on my third logitech MX Master. The new one, a 2S model, is slightly smaller than the older ones, but still works well. It’s my third one because they seem to not last for me - not sure if that’s me or the rather complicated set of mechanicals involved. But the fact that I’ve bought the second and third one is a pretty good endorsement - I’ve got several fairly decent backup mice, but even the logitech G900 isn’t quite as nice. The MX Master is perhaps the best feeling mouse I’ve experienced, and the way the scroll wheel works - well, once you get used to it, nothing else works right.

I’ve never really gelled with trackballs. I’ve had several, but they never seem to work out. And I’ve had a lot of gaming mice, by various companies - the R.A.T. 7 (or was it 5?) was one of my favorites for quite a while. But almost all gaming mice depend on some level of software support, and most of those companies don’t really make an effort to get their mac support up to par.

No experience with trackballs. But I use a Razer Deathadder Chroma (I think the newer ones have slightly different Deathadder names). Best mouse I’ve ever used, comfortable/ergonomic, very responsive.

I’ve been using it for close to four years, 8-10 hours a day, still as responsive as ever and no hand/wrist pain to speak of, which hasn’t be true of many others I’ve used. Has lights, but you can dim them and set the colour. The software is irritating (why does my mouse config need cloud support?), so I’d recommend installing it just to set up the mouse, and then removing, it leaves the config files in place.

I use a Logitech M510 at home and school. They’re not too expensive and have just two extra buttons along with a four way scroll wheel thing.

Unpretentious and simple but pretty comfortable for me!

For me, wireless trackballs were a revelation for workspaces occasionally cluttered with pieces of hardware. I’m using a Logitech MX Ergo, as I find the angle more wrist friendly than the typical flat setup.

I currently have a Zowie FK2, cheap and sturdy, had it for around 4 years no and never had an issue, its completely driver-less so just plug it in and use it. It is also extremely light, so you can use it all day and your wrist wont get heavy (that is if you are someone who picks up their mouse a lot).

I would still look into your grip style and your hand length/width, might help you out when trying to find something that will fit you well. This guy has 100s of mouse reviews, its mostly gaming oriented but at the end he talks about ergonomics etc. If you find a mouse you are interested in see if he has reviewed it before, it might help you decide.

I had the same experience with Logitech MX mice. They are great for a couple of years then the tracking and buttons slowly start to get funky. I have tried cleaning the contacts and optics but usually end up getting a new one. I’m about a month in on a MX Master 2S and am happy so far. I got a G613 keyboard at the same time and surprisingly found the Bluetooth / Logitech rf switching option useful for controlling two systems.

I’ve also been using the Logitech M510 for years. The only thing I sometimes find wanting is a smooth scroll wheel (rather than indented) but otherwise have no complaints. It runs in AA batteries but they last a very long time in my experience.

Swiftpoint GT for me. Both at work and at home.
Not cheap, but amazingly comfortable.
And tiny.

I’ve been very happy with a mouse I use all day every day for my work as a sound editor in Pro Tools. It’s the cheapest mouse I’ve ever bought, too. It’s the Anker Wireless Vertical mouse which costs $20. It has an ergonomic shape which I got used to instantly. Highly recommended.

I use Logitech M570 all the time. I don’t have the desk space for a mouse and a brief flirtation with a trackpad left me with a RSI.

Very easy to use. The extra buttons and scroll wheel are genuinely useful and the battery life is insane. And no RSIs.

Logitech thumb track balls since 2000 here. My first wired one still works. I’ve been through two of the newer wireless M570, the contact switches go after a few years, but in the second one, I replaced the contact switches with much higher quality ones and it’s been going nearly 5 years with no probs now.

I have one of those as well.
If you have space problem on your desk, a trackball is a must!

The first thing I do when I get a new Mac is throw the included mouse in the trash.

For general purpose use, I highly recommend the Logitech MX Anywhere. I have used them for many years. The wireless USB transmitter works utterly reliably—unlike Bluetooth—and the “Darkfield” laser tracking is infallible on nearly any surface. The Anywhere is also highly portable, making it a particularly good match for laptops (provided you’ve got a USB-A connector!)