I moved from the UK to Japan in 1999, Japan to Italy in 2011, Italy to France in 2014, and then from France back to Italy last December. I moved lots of audio gear (and pets!) each time, and never had a problem, but always went with reputable global moving companies. It’s not cheap but they do a great job and everything is insured. I think the only thing that I can remember getting broken in any of the moves was a lamp, and they offered to replace it. Nothing ever went missing. It’s usually around 40-50 boxes of stuff in total.

So my only advice is to read up on which companies will do the move for you, and try to chose the one with the best reputation.

We always say it’s at least a six month struggle when global moving, three months prep, three months settling in etc. but then it’s plain sailing. Enjoy your new life! Nothing like living in other countries to broaden your horizons. Our daughter is half Japanese and half British, spent over half her life in Europe, but has never lived in the UK. I envy her upbringing!

Congratulations on the move!

It’s definitely unlikely that you’ll be able to score any gear more affordably there than you can here. Not to encourage GAS, but whatever. (Though, I scored a Blofeld keyboard relatively cheap, the only deal that was on the local Craigslist equivalent. But Casios were $$$.)

At my worst moment of international geardom, I flew international with a ukulele, three volcas, a Reface DX, a Waldorf Blofeld, and a mid-eastern instrument, all of which entered airports, passed security, and which I had no issues with.

(Also, it all passed through the undercarriage of a 13 hour bus ride, and a nice metro trip too… In retrospect, those were some wild decisions.)

The only thing to worry about with carry-on gear is to make sure that you can demonstrate that everything turns on for security folks. I had a laptop confiscated by security when I was changing flights in Paris because my charger broke and the battery no longer held a charge, and it took daily phonecalls to French airline customer service in order to get someone to locate it and ship it to me at my expense.

Don’t be me! Order power cables to the origin and not your destination. (The replacement laptop charger that awaited me when I reached home was salt in the wound!)

(For lack of advance planning and thought, the Waldorf ended up getting checked under the plane in a soft case wrapped in a quilt. One key was damaged, otherwise it’s in perfect shape.)

Also, for reference, this journey was in mid-2016, so all the new security rules were in effect, but maybe there was still a bit more laxness w.r.t. LITHIUM.

I’m another UK expat living in Milan! We moved London- Paris 2013 and Paris - Milan last year. We also used professional movers and they do an impressive job and absorb a lot of the stress. Enjoy your move!!

We should meet for coffee some time! I was in Paris from 2014 to last December.

Gladly! Will shoot you a pm

During my move from Korea to the US I basically just brought my case as a carry-on and stored my smaller case in my checked suitcase with clothes surrounding it on all sides.

I did get stopped upon arrival to the US and they inspected my luggage. When asked about the gear I simply explained what it was and that was that. I didn’t need to plug it in to demonstrate and they didn’t even swab the equipment for explosive material.

I’ve had some great experiences with www.luggagetoship.com recently, but it really depends on the destination country…

The most comparable move I’ve done has been US to UK (2007). I saw @Rodrigo already chimed in with some info about that, but it might be worth knowing the rate we paid. 100 square feet (which is smaller than I thought! It’s like a pallet stacked 5ft high). cost us $800.

Another interesting part might be the scam someone tried on us: We had received our stuff and then got what looked like a bill in the mail for £100 (or maybe £200) “related” to the docking…or storing…or something. I can’t remember now 13 years later. We noticed it was in Rod’s name, which tipped us off. The shipping company only had my contact details and we paid out of my account. We simply threw it out. Still it’s weird to be welcomed to a new country with a scam. Actually, we were targeted for various scams our first year there, which felt terrible…but that’s a post for another thread

Thanks everyone for responding. got a lot of research to do before the move and luckily i have some time.

Hi, longtime listener first time caller here.
I’m going to be making an interstate move with a moving company at the end of next month. I have two cases of eurorack gear, a 12u 104hp wooden console case and a 7u 104hp Intellijel case that I use when I perform live. I am planning on unloading the console case and boxing up all the modules in their boxes. But for the Intellijel case, do you think it would be okay to leave the case filled, put the lid on, and wrap it in bubblewrap and box it up? I cannot take it in my car unfortunately. Does anyone have any additional tips on having studio equipment moved by a moving company?

Hey! About to fly to fly from the US to London for a week, and planned on flying my Syntakt + Norns Shield over.

Was wondering if anyone has had recent experience flying a Norns Shield (specifically) internationally, I have it in the white side/plastic lid case from Monome, but worried it does look a little bomb-like. Also considering taking my 128 grid, but not sure if that would look like a detonator or something.

Is there any reason I should consider just leaving these at home? It’ll be in an elektron bag with the Syntakt, and figured the Syntakt’s “12 Track Drum Computer + Synthesizer” label might help them realize its definitely an instrument too haha.

PS: Realizing how amazing the Shield + Syntakt combo can be. Can connect via USB, use one of the Syntakt’s tracks as a MIDI sequencer, and then run the Norns audio through the analog filter/fx etc c:

Fly away! I’ve done that and flew even with some self-built banana instruments once — those if anything look like the “Naked Gun / cut the red wire” type makeshift bombs but no questions were asked.

Thanks for the info! Yeah I’ve flown this sort of stuff domestically in America just haven’t gone international/dealt with customs in years so have some paranoia haha. Great to hear your successes tho haha. And lmao on the self-built, that’s awesome you can get stuff like that through.

Came across this related pic haha: 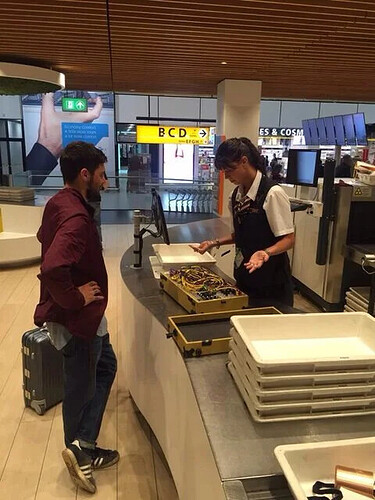 I once had to explain an Octatrack to a US border agent at the airport. [insert “it’s a machine that makes music” joke here.]

I wouldn’t worry about it, I think it will clearly be ‘not a bomb’ when viewed on the X-ray.

“Alright, so there’s static, flex, thru, neighbor tracks, some other stuff. But let’s start with static.”
A few hours later ya’ll are just jamming

Traveling by train no questions asked

Alright, so there’s static, flex, thru, neighbor tracks, some other stuff. But let’s start with static.”
A few hours later ya’ll are just jamming

I lost him at the relationship between patterns and parts.