Looks like the new Mutable joint Stages has been announced.

Interestingly it has connectors on the back that look familiar…I2C? 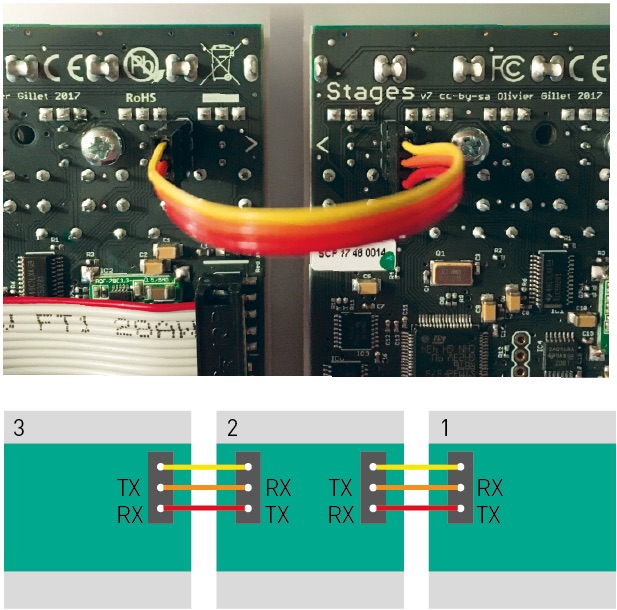 I’m usually immune to the “new module fever” that most people into eurorack tend to have but this one is right up my alley and will make me sell my Maths (because of space and money limitations, Maths does other things but this one seems better for me).

This one has been my favorite of the three. It does such a ridiculous amount of modulation-related stuff (and lo-fi audio processing). I’ve been comparing it to Verbos Voltage Multistage and Batumi, but more

Most of when I use it, it’s for basic stuff on demand – I think it will shine in small systems as well as acting as a complex modulation source for larger ones.

have to agree, that’s tempting…

Stages looks to me very much like a simpler version of the Rossum Control Forge. It looks like a useful module, but not a must have for me.

It looks extremely useful.
I’m also thinking about replacing maths with it. I know Maths does different things as well, but I have a tiny system… Would not mind the 6 extra hp. However, maths is my most used module together with Pam. Have to wait for some videos to grasp the possibilities…

I’m not sure I understand what it does.

Stages can do EOR and EOC

I’m not sure I understand what it does.

A modulation source that can be envelope-like, sequencer-like, LFO-like, or fader-like. It can also process CVs: sample+hold, delay, slew, trigger-to-gate, sequential switch. And you can separate it into multiple independent parts by patching it.

So it can be one 6-stage sequencer, or an ADSR and two simple LFOs, or 6 decay envelopes, or a trapezoid LFO and a delayed copy of the same LFO, or 3 LFOs and a 3-step sequential switch that selects between them, or an ADSR where the sustain stage is an LFO… etc.

…and there’s another module masked out on the left hand side. Olivier has been busy!

A modulation source that can be envelope-like, sequencer-like, LFO-like, or fader-like. It can also process CVs: sample+hold, delay, slew, trigger-to-gate, sequential switch. And you can separate it into multiple independent parts by patching it.

This module makes me hot under the collar! I’m excited to start with 1, but boy-howdy does it seem like it’d be easy to use 2… or 6!

Going to c/p what I wrote elsewhere:

I read the manual. The hybrid of envelope/sequencer is nice… but the behaviour of single stages is super-smart - single decay envelopes, or LFOs, or sample/hold SH.

And six is such a good idea for a number of stages, for the combinations it allows: gets you an ADSR+AD, or three ADs, or a pair of AD envelopes and two LFOs, and makes all manner of Buchla-y odd-number-sequencers possible. (I lie: it makes two possible, a 3-step and a five-step).

It feels rich and and full of possibilities - properly lower-case-m modular! It excites me in the way that Tides does.

It is easily my favourite out of the new-three, and it’s making me reconsider things in my case harder than before.

@burn - Not with TX/RX lines. Not everything with three wires is I2C! If it’s one way transmit/receive, might be simple UART. (I2C is ground, data, clock.)

I can see myself eventually owning at least two, if not three. This is turning out to be more of a spendy season than I thought though, and I really should wait and see how my incoming gear settles in. Until then, one will do

I had the same thought, I could see ending up with two or three of these, but for now I’m going to order one and see how it plays with the modulation sources I already have.

Interestingly it has connectors on the back that look familiar…I2C

I have had a Stages for a little bit, and I had this exact same question the other day. Unfortunately it is not. From Olivier: