Ah! Thanks for clarifying. I’ll ask on youtube. Still, thanks for posting it

Wouldn’t have seen it otherwise!

After a few months I felt like I’d finally grasped the basics of the module, but I was kind of using it in the same couple ways. So last night I sat down and spent a few hours deeply focusing on Stages and trying out some more complex self-patching, plus lots of cross-patching with Marbles.

-I explored it as a sequential switch, S+H/bitcrusher, and pulse generator
-I further explored the idea I mentioned above re: patching ch1 as a decay envelope to “strum” the new quantized sequence mode
-I switched ch1 to a clocked LFO off of the same clock as the sequence, and then multed the sequence’s output to ch1’s time jack to modulate the time division of the LFO
-Pulling the clock out of ch1, switching it to square, and patching it as the sequence’s clock, I got a sequence that modulated its own clock speed in wonderful ways depending on the setting of the knobs.

This module is such a chameleon and I’m even more in love with it than I was before. Now I’m thinking about replacing my current slew, function generator, and ADSR modules with a second Stages. I’ve got such a small case that it actually would save a few HP while opening up the door for longer sequences.

Would you be able to post any videos demonstrating these techniques? Or point to any you are aware of?

I’ve gotten nowhere near this level of results from my Stages, and would love to!

I’d be happy to make a video! I’ll borrow a USB camera from work tomorrow and throw something together.

Yeah I’d love to see this. I have a Stages and I don’t love it, but there’s so much utility I can’t bring myself to sell it.

As promised! this is my first time making a synth tutorial video, but it was very fun. hopefully this gives you all some fresh ideas and doesn’t retread too much of the same ground covered in other peoples’. I was particularly proud of the last one where I used Stages as a drum machine! 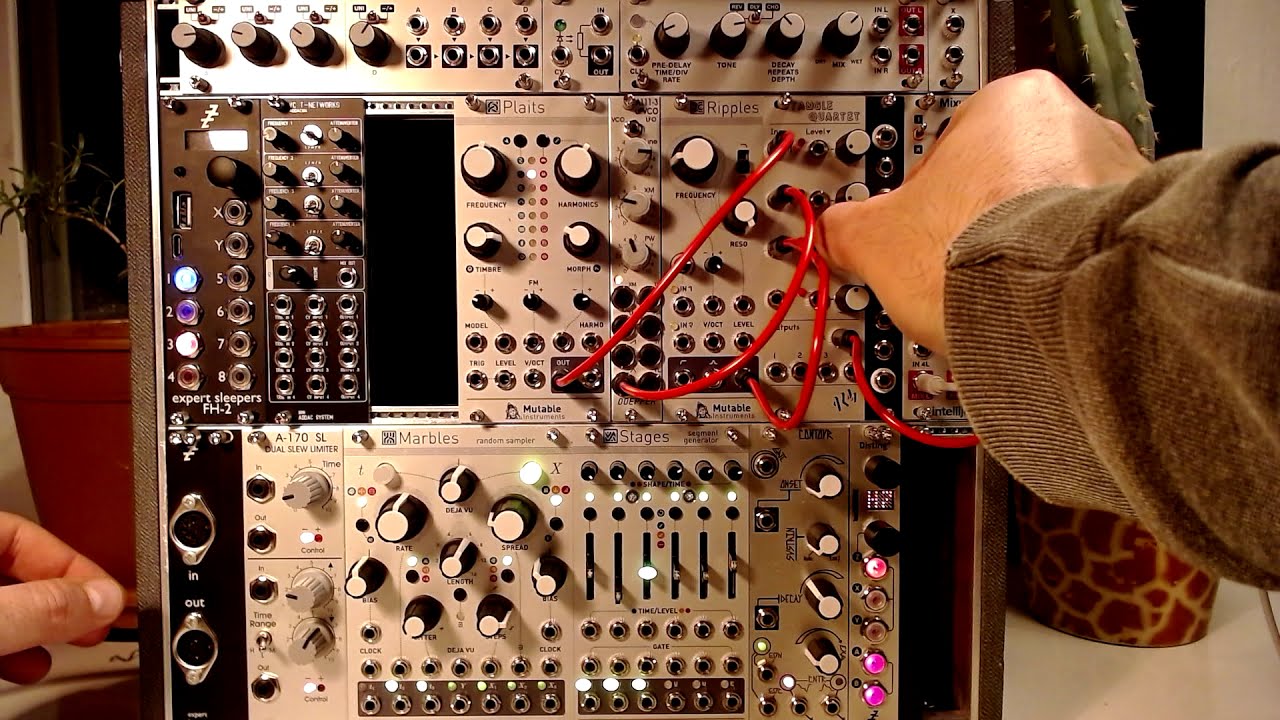 Thank you! I dig that sequential switch trick, haven’t thought of that one. Also thanks for pronouncing Doepfer correctly

Anyone out there rocking more than one Stages (connected)? Would love to hear about how that gets used. I feel like the new sequencer modes and the alternate firmware have really opened it up to me in new ways and I’m a little tempted to double down.

While reading the Patch & Tweak interview with Mutable Instruments, I came across this quote from MI
about the design of Stages:

In my mind I kept this ideal of a “bird call sequencer” – not clocked by a rigid clock, but able to do trills with smooth or stepped motifs – and performing those sequences in response to a trigger.

This notion of a “bird call sequencer” is immediately intriguing, and could probably warrant its own discussion on what such a thing means. Even in the context of Stages, I think there are many ways you could accomplish or interpret this.

My first attempt at this concept is to chain several red (hold) segments together. Trigger the leftmost gate input, take the leftmost output and send it to a v/oct/FM input somewhere. Use the faders to adjust pitch and the potentiometers to adjust the duration of each pitch. The end result is an “executable” sequence that performs over a non-clocked time duration.

Expand the patch by using another Stages segment as a S&H: sample a random source with the same trigger input as used for our sequence and send the output to modulate one of the bird-call pitch values.

I’m imagining stepping though different looped pairs/trios of segments - s/h stage ramping (ramp time via CV) to another and then back around until the sequence moves on?

hey all, does anybody have an updated bom for a 0603 build, about to start this build and realized the bom I ordered from was all 0402, oops

So I read about quantussy cells linked in the ER-301 thread:

This diagram shows a generic quantussy cell, as I call it. See What Is The Quantussy for more information. It’s the name of the five oscillator cluster in Peter Blasser’s ... Read More

… And decided to build some out of Stages: 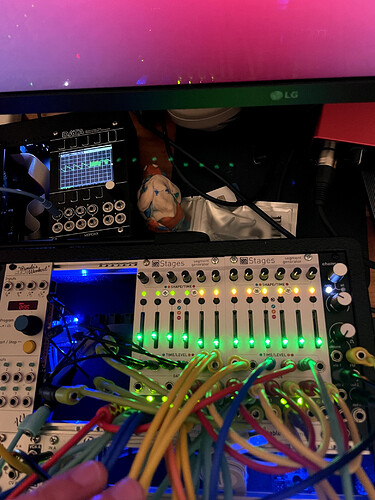 Two stages makes four cells (1 LFO & 2 S+H per cell). Since they work best when connected in odd-number rings, I connected three of them.

Using the outputs as

Anyone know if Stages can do the phased / out of phase thing that Batumi / Just Friends can?

If you patch 4 phased clock signals you can achieve phasing, but it will require lots of patching @peachesandbacon

Of course, but the phased / out of phase stuff isn’t built in, I didn’t think so, just wanted to check.
Thank you

Well as it follows kinda “patch programming” paradigm I figured out that you can patch three out of phase lfos with the other outputs configured as clocks. So it’s kinda build in

Do you need to be in a specific mode to do this?

I’m still trying to get the modes sorted out…

You won’t be able to do three in perfect phase ratios, but, I would have started Something like that:

Don’t have stages here with me, but it should do

I am sure there is a Stages thread here at Lines, I am also interested in patch ideas

You can easily access the Harmonic Osc with @qiemem 's firmware which can give you interesting LFO phasing. From qiemem’s firmware doc

Note that, as in the original Stages’ harmonic oscillator mode, it is possible to set
frequencies in between two harmonics. This can be really handy for creating LFOs with
interesting phasing, but may be confusing at first if you’re expecting the LFOs to stay
exactly in sync. The frequencies will “snap” to defined harmonics, so it shouldn’t be too
hard to get things to stay in time.