I just started to participate in the lines community and wanted to share a label I collaboratively run called Nada.

Nada was established in 2011 as a platform for the promotion of subversive musics and contemporary sound works. Activities include publication and distribution of recordings and objects, as well as hosting events, happenings, and radio.

Currently we have a 40% discount on all physical/digital releases on our Bandcamp until Sunday.

Below is a taste of what is currently available. Enjoy!

“There is nothing else but sound, all that exists is vibration.” —Zbigniew Karkowski

Roy’s record intermediate mv. (demonstration) is one of my all time favorite releases… keep up the good work over there!!!

One of my faves as well!!

Welcome! Nada is awesome. I bought the physical Mesabi Range a few months back while learning TidalCycles. It was great being able to simultaneously listen to an album while following the code.

Roy’s record intermediate mv. (demonstration) is one of my all time favorite releases

Listening to this now. Thanks for the rec.

Welcome! Nada is awesome. I bought the physical Mesabi Range a few months back while learning TidalCycles. It was great being able to simultaneously listen to an album while following the code.

Yes yes, also picked this up a few months ago and went through a similar process.

Great label. Great people. I recommend seeing Michael live if you ever get the chance - very viceral sounds.

I’ve been listening a bunch to these Nada releases. An absolutely great label. Great work.

Thanks everyone for the kind words.

Available as a limited edition cassette and digital DL.

Our interaction with the outside world is effectively unconscious, some estimates say that only 0.01% of our neural activities are consciously fired, leading us to critically question the extent of our involvement in everyday actions and decisions. Our conscious perception has been compared to a black box program, a serial protocol communication machine in a multi-parallel environment. In our digital age this analogy is undoubtedly pertinent: big data, quantum noises, chaotic information, political and social complexities, and cultural biases – an overflow of stimuli. The unconscious mind grasps everything to induce a comfortable intelligibility of our informational surroundings. There are some slips, glitches, biases, noisy assimilations, errors, cacophonic impressions. Our vigilant apprehension of the environment is bent through our responsive apparatus as it seeks for meaning. Parsing is easier through this processed conglomeration, producing spasmodic psychological illusions and phantomatic bleeps. 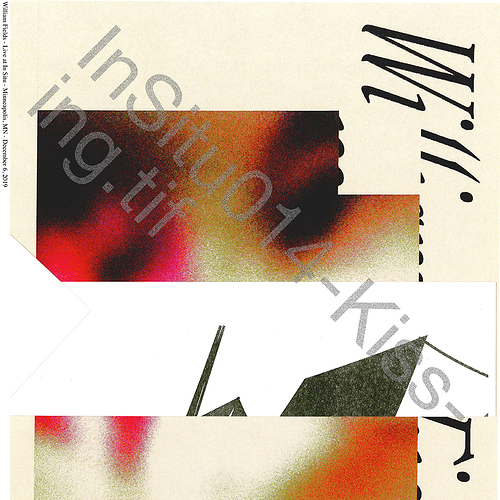 OUT NOW
William Fields - Live at In Situ 2019
Digital DL available at: nadarecs.bandcamp.com

“This recording documents my performance at the In Situ festival in Minneapolis on December 6, 2019. The first half of the set are improvisations based on an algorithm developed in conjunction with the audience at a workshop the night before. The second half are based on randomly selected “seeds” that were generated in advance. In both cases, I didn’t know what was coming at the beginning of each section. I had to improvise based on whatever was presented by my music system, and attempt to shape it into something musically interesting. It’s a scary way to perform, but it’s an interesting challenge and very engaging for the performer!” -William Fields