I have a Behringer CMD MM1 midi-controller and I need a few buttons to change their color from orange into blue, when I press them (the controller is capable to change the buttoncolor, lol). The problem is that Behringer themselves had put out a crappy midi-remote-script which has never worked for anyone, so that some guys from djTechTools wrote their own script, which is stable, but in this script the only buttons changing the color are the “Cue”-Buttons…

I think this isn’t a big deal at all for somebody who has knowledge of those scripts… I’ve tried it myself and I’m pretty sure that there is just a value that need to be changed… somewhere, haha

Can anyone do this real quick for me?

(OR DO I HAVE TO MAKE ANY CHANGES IN ABLETON’S MIDI-MAPPING SECTION???)
I’ve also uploaded the folder with the remote script

THANK YOU IN ADVANCE 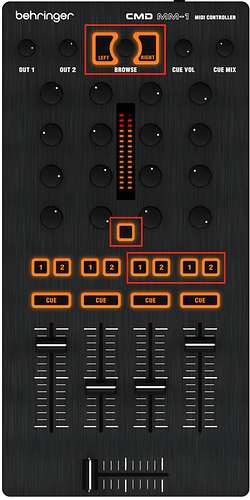 Need a little more info: Is what you’re trying to do is use the functionality of the djtechtools remote script, you just want to augment it with some color changing on the device when in certain states?

Thank you for the respond!

Yeah, it’s what you have said

The djTechTools script is cool, but it just needs these few minor adjustments for being perfect for my needs. It would be awesome if only those particular marked buttons change their color… Is this even possible??

Is this the script you are talking about? If so, that isn’t by DJTT, but contributed by a user. Your best shot might be in simply asking that user!

I have a pretty deep knowledge of Ableton’s Remote Script architecture and code. I’d be happy to see if I can help. But:

Please be extremely specific about what you want to happen (you can PM me) - I don’t have that controller, and I don’t know what those buttons do, or under what conditions you want them to change color.

You’re right, just got it from the DJTT-Website… Wasn’t looking so close, when I’ve downloaded the ZIP back then

I’ll shoot you a detailed message!!
Thank You!

Did you ever figure this out?
I’m having the same issue. I just want it to change color when pressed.

but maybe now someone will react to this topic and says „I can do that easily!“…??

Yeah I really hope so. I did however find this site called Remotify

But to get features like that, you gotta pay $67.
I was trying to get the “1” & “2” buttons to change color AND activate a device. (Simple Delay, Reverb)

oh, that looks really handy! thanks for sharing

i feel you, mate… we are asking for such a small thing and it shouldn‘t be that complex/ expensive