this thread has a few tributaries

‘less concepts’ formed rather quickly (comparatively) and feels like an honest expression of what I’ve learned from lines, through both Sound + Process and the irreplaceable friendships I’ve been lucky to find here.

the album is entirely sequenced with Teletype’s CHAOS.ALG 3, which is the cellular automata operator. having traditional “composition” stuff handled by algorithms helped me take inventory on what parts of my self are fulfilled by art-making – and most importantly, this process helped me tune and center those parts.

as I worked on documenting this approach, I realized that there was a level of inaccessibility baked in – even if others had the same hardware, there wasn’t a very actionable way to expose the value of manipulating cellular automata (CA) growth to crawl scales and provide note timing. so, I spent some time and built a Max patch that encapsulated not only the behavior of the CA but also presented the programming decisions I made to create the pieces in the album.

eventually, this became a way to encourage others to “make this album at home” – this also resonated with my desire to examine + realign those layers of fulfillment I mentioned above.

the resulting software is a standalone app for Mac, also called ‘less concepts’: 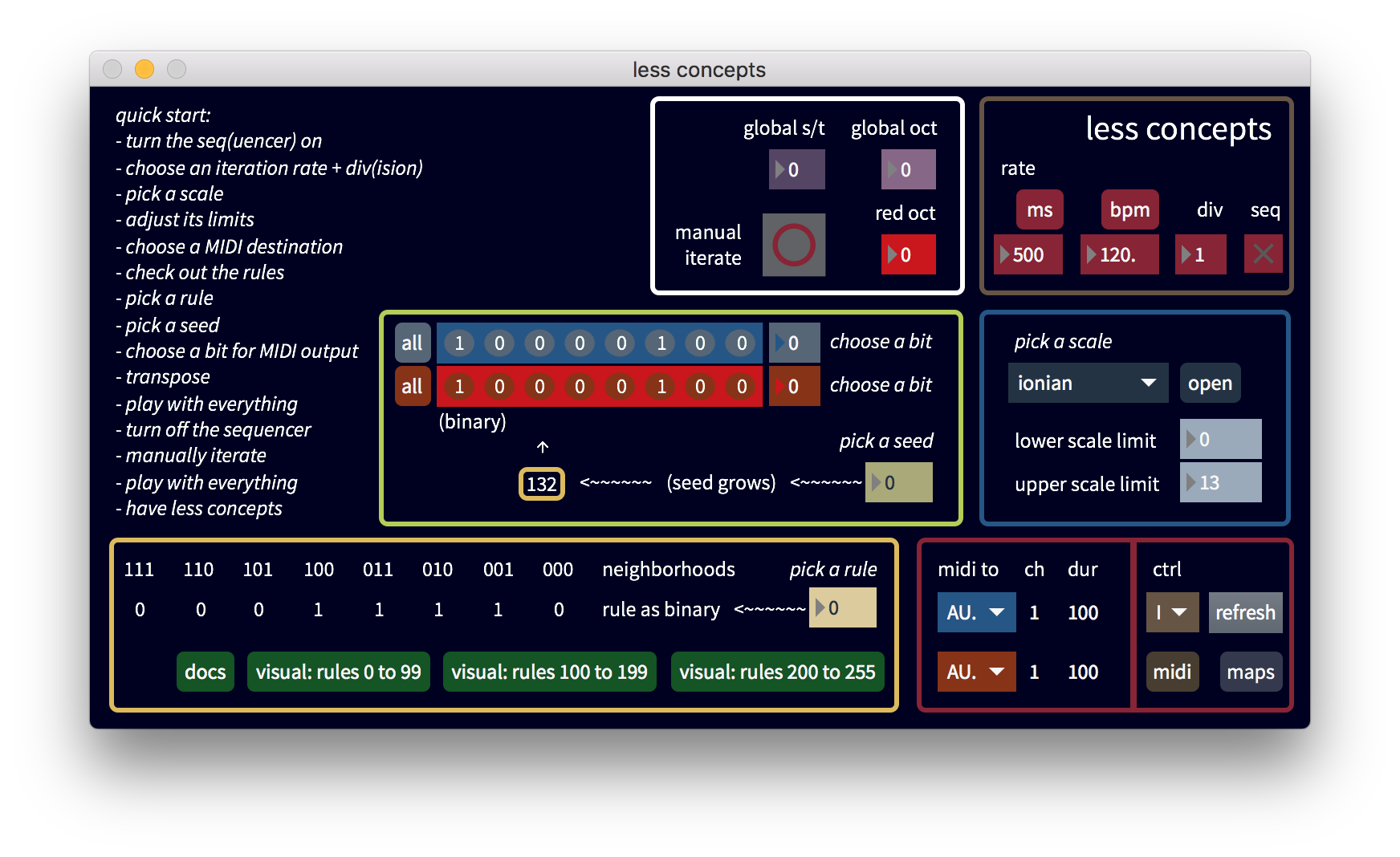 the app documentation also serves as liner notes for the album.

both will be released on 10/28. I’ll update this thread to serve as a support / questions corner for the app.

the album will be available as both a digital release + a limited edition tape through Bandcamp.
the tape will feature unreleased tracks and a sticker of the album artwork (incredible work done by suitcasedog).

the software will be released through GitHub, same day. preview the documentation / liner notes here.

(much love to @Jonny, @barnjazz, @shellfritsch, @trickyflemming, @madeofoak + @tehn for their guidance, advice, encouragement, and proofreading these last few months.)

nested, recorded at the Vintage Synthesizer Museum with a small Serge system and the less concepts app, released 1/13/2019. see here in the thread.

there are a ton of great insights starting here (p much) into DSP + synthesis from alanza, andrew and ezra.

a norns version of less concepts received much of its beta testing through this thread as well. it has been submitted to dust for approval

Very cool + appreciate the conceptual framing all above - looking forwards to checking both out!

been listening consistently since you sent it over, lovely work dan!

tapes at our show ??

looks like NAC is coming through! I’ll have at least yours + @Tyresta’s + @barnjazz’s

super duper thanks to those who have already pre-ordered. v surreal, v

Digging the one available preview track of this. Nice work, cool concept.

score. feel free to bring some extras too if you’re looking for sales !

and, of course, <3’d the first track. it feels pretty different than what you’ve shared in the past, but more unique and much more you (ironically).

can’t wait for the release show! can’t wait to get LC running at home! hopefully my '09 macbook will be able to handle it.

yayyyyyy. been stoked for this since hearing you talk about it in July!

the cover art reminds me of your very cute apartment (and subsequently enchiladas, your cat, unending kindness of this community, etc)

the cover art reminds me of your very cute apartment

that’s cuz Racquel did the cover art + our kitchen mural!

(also, thank you josh! you were a wonderful guest + an even better adventure-mate)

can’t wait to hear the whole thing! congrats on the release and you are awesome!

Loving this initial track, @dan_derks, and can’t wait to hear the rest. Congrats!

Love the first track! Looking forward to the rest and the cassette!

hooray, just pre-ordered! also i’m so excited because i always miss the cassette pre-orders, so this my first! congrats dan!!

i’m so excited because i always miss the cassette pre-orders, so this my first!

congrats jacob! (but sincerely, thank you. i’m stoked about this small run, very grateful to share it with you

hey everyone, real quick: funds received from pre-orders will be donated to http://www.transgenderlegal.org

if for any reason you do not wish to have your payment donated, then let me know through DM. please note that I will cover that amount personally, so as not to detract from an energy I wish to contribute to.

(chicago friends: if you’d prefer in-person delivery, plz lmk if you’d like the $3 shipping donated or returned to you.)

please reach out through DM with any questions.

Very excited about this one! And the donation too

you are soooo fucking awesome!

Thanks for sharing this. Very excited to listen to the whole thing!