please let me know that your arcs are arriving in good condition! e-mail info@monome.org

to the top! only heard from a few of you! drop me a line.

Sadly mine it’s not in good condition

I’ve just sent an email to info at monome.org

e-mailed. what a drag.

Loving it. Grain storming right now before I attack the rack and install the ansible 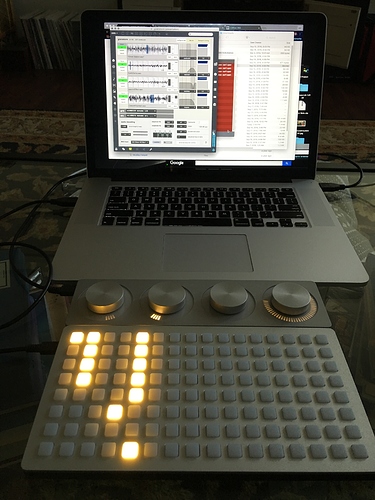 Apparently mine is waiting in the mailbox stateside. Will be grabbing it this weekend

I think I’ve got things going.

One question: The rotation seems very damped, quite a bit of inertia. However if I pull up on the knob a bit then it spins quite a bit quicker with less resistance. Is this normal? Never touched one of these before so I have no idea how it’s supposed to feel.

pulling up the knob will disengage the friction surface, which is greased. the intended friction is quite slow, as these encoders detect very tiny movements-- hence there’s no need for rapid 180 degree turns.

i’m working on a modification to achieve a faster turn, however. will keep you all posted.

Just to be clear, the arc encoders only rotate. There is no click detection, etc. from them? Selection of app controls/parameters are done within the ansible. Correct?

correct! arc key detection was only on the first edition in 2011. we abandoned those encoders due to low quality.

Got my Arc and Ansible today! Very excited for these.

I’ve tested out my Arc with OS X 10.11 and Ansible with no issues so far. (Is Ansible’s panel drilled differently? It doesn’t fit in my rack in the spot that Meadowphysics was in. I have a pre-drilled rail since I hate sliding nuts.)

I’m having major issues connecting Arc to Windows 10 x64. It’s not showing up in the serialosc device list in Max. If I unplug the Arc and plug in the Grid, the Grid is detected just fine. Occasionally, the Grid won’t be detected, but restarting serialosc (under “Services” when pressing Ctrl+Shift+Esc) will fix that. It will not fix Arc’s detection, though.

I’m having major issues connecting Arc to Windows 10 x64. It’s not showing up in the serialosc device list in Max. If I unplug the Arc and plug in the Grid, the Grid is detected just fine. Occasionally, the Grid won’t be detected, but restarting serialosc (under “Services” when pressing Ctrl+Shift+Esc) will fix that. It will not fix Arc’s detection, though.

the arc and grid use an identical FTDI chip, so they should be the same in theory, on any OS or Ansible. you’re not having issues with Mac or Ansible? just windows?

meadowphysics had non-standard hole positions. ansible should be correct. did you have to shift your rack to accommodate meadowphysics?

I’m not sure with the rack position… When I had MP my Trilogy + Teletype + Walk were flush (except the Walk had a gap between it and TT). Now Ansible is the only non-flush one. It’s not a big deal, really.

The Windows thing is tougher to deal with. Yes, it’s just Windows acting up in my testing. Ansible worked perfectly from the get-go. For OS X, I needed to install serialosc and reboot the computer (quick note: the installer doesn’t tell the user to restart the computer, but the serialoscd service doesn’t start automatically after installation on 10.11). For Windows, I just built this computer two months back, so it didn’t have prior Monome or FTDI installations until today (I’ve been using Grid only with the modular). Nothing seems to work so far with getting the Arc to appear.

If it matters, the Grid was built from a kit.

@trickyflemming does the arc show up in the system profiler? trying to narrow down if the FTDI driver is the problem, or serialosc.

When I plug it in, I have a device showing up under Universal Serial Bus controllers called “USB Serial Converter”. No errors reported, and the driver listed is FTDI 2.12.18.0, dated 06/16/2016.

Decided to experiment…
I shut down serialoscd.exe, went to the Monome folder, and manually launched it as administrator. It reports “Running in debug mode, hotplugging disabled.” I opened Max 7 and launched arc_test from the Monome package. Arc doesn’t appear in the dropdown. However, in the serialoscd terminal window, it reports “localhost:13288” and “localhost:12082”.

Arc arrived today from Control - everything is looking good so far! Don’t have an Ansible yet so am digging into the Arc apps for now. Would love to play around with Kria in a Max/Ableton environment eventually.

hey brad
have you tried Electric Dharma Wheels?
If you would Run it and let me know your experience

Things were going great and then for some reason the Arc seemed to freeze up. All or most of the LEDs lit up and the encoders unresponsive to anything in Max. I’ve since moved to a different machine, reinstalled serialosc, and tested several different Max patches with no success. I’m sometimes able to get LED movement in the EDW app but the encoder is unresponsive. I’m not sure what is going on - did this happen to someone else?

EDIT: So the Arc is now completely unresponsive on both machines and neither recognizes that its even connected. Grids works fine. Maybe I just got a dud.

EDIT: So the Arc is now completely unresponsive on both machines and neither recognizes that its even connected. Grids works fine. Maybe I just got a dud.

this has happened once before. some sort of assembly flaw on the the FTDI chip which i can’t understand exactly but know how to fix. e-mail info@monome.org and we’ll get it replaced right away. i’m very sorry for the trouble.