So I just got my new Grid and I ran into something.
It seems like it can get overloaded with messages, which makes the leds stop responding.
Buttons still work.

It seems it happens MUCH easier with the /grid/led/level/set message rather than grid/led/set message.

I have included a video and a patch to demonstrate the problem.
I can not remember this happening so easy with any of my other grids (earlier models)

Any idea what’s going on here? The biggest problem is that I have to unplug and replug the device to get it to work again.

Hope it is ok that I tag @tehn

Hey! At the risk of jumping the gun, this behaviour has been observed recently in relation to control:

closing the loop! @Fardles , thank you for such clear repro steps + helping suss this out, really helpful!!

Hope that’s helpful! I’m not sure if @dan_derks has any other updates from that post

I thought I’d just share that now in case this was time-sensitive!

correct— there’s a firmware bug in the new grid that i’m working on now. this is the same case demonstrated by the control patch linked above: wickedly inefficient use of the serial bus, which max patching sortof encourages by its very nature. a quick fix ahead of the firmware fix is to use the hotpatch that @dan_derks made— it accepts /led/level messages and packs them into /led/map which is extremely more efficient.

(@dan_derks do you want to post the patch individually as a little howto?)

@Fardles , good eye! thanks for linking! 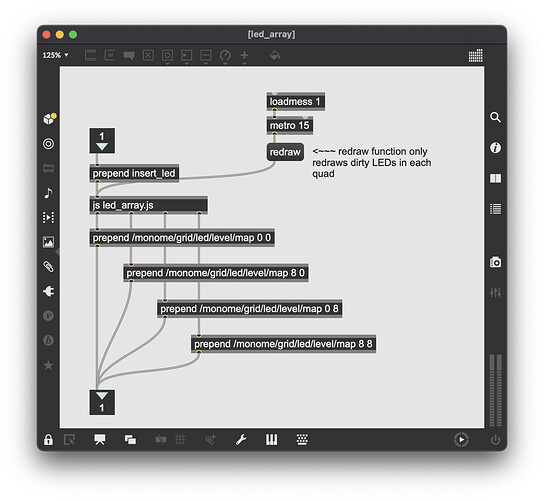 how to use it: 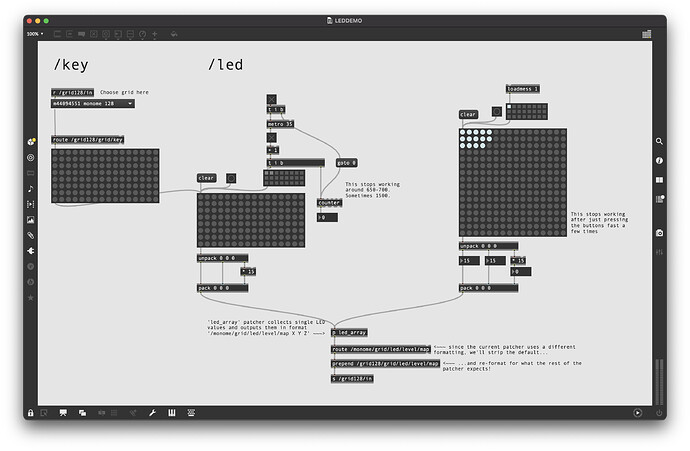 i let it run for 5k iterations before the rapid flashing made me feel wiggly, but that ought to work, @KristofferLislegaard !

Hi.
Looks like this is still an issue? Either way thought I would post my fix for SuperCollider here in the hopes that it is helpful to someone. Maybe not the best solution but it has worked for me.
Would love get back to using MonoM.levset.
Later.