It sounds to me like you plugged it in the right way.

I noticed there is a concert just in my neighborhood, it’s organized by this Feedback Musician Network which i just learned about. There’s a blog with some posts.

The concert is being streamed here 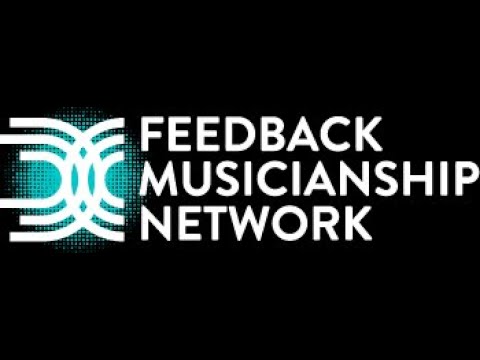 First post here so sorry if this is already covered in another thread, but a quick search couldn’t find any.

After playing around with no-input mixing boards for fun (+for my degree), I wanted to try the approach in the digital world (because of a micro obsession with laptop music lol).

I’ve managed to get some results out of Pd, however people I know tended to find them… not nice.

I just wondered if anyone has any successfully created any systems on computers that creates interesting feedback systems? I’m particularly into Pd but all experiences would be interesting to hear!

Last summer as just sort of a meditative relaxation thing, I was doing a digital no-input mixing thing every day on iPad using AUM for a couple months. It’s pretty nice because you can sort of sculpt the mixer to be how you want it to be. I find that it tended to be hard to get started and tended to lean more toward static tones moreso than a standard mixer would. I suppose because a digital system tends to be noiseless, and no input systems are sort of reliant on the noise floor being amplified via feedback. I was usually getting around that by using plugins that had some ability to add noise to the system, like tape simulation.

I really enjoyed doing it, but I think because of some of the limitations, I probably wouldn’t go for something like this in a group setting, the digital nature of it made it a lot harder for me to control, and it would be a lot harder to react to what others would be doing. As a solo tool though, pretty fun! 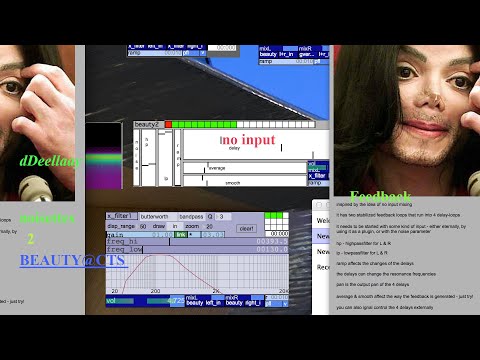 Back when I was using ppooll a lot, beauty was something I used basically everytime I opened the program. Shame it’s so hard to get ppooll running nowadays, I’d love to revisit it.

I have made a few feedback patches on VCV with something like a filter and a wavefolder going into each other, then there is so much CV sources to play with parameters, retroaction etc, it is really fun and alive.

One I remember to specially like had a reverb feeding back into itself, with the feedback level being controlled by an envelope follower with slow attack and release rates, so it had a sort of pumping movement, that you could then alter with semi random CV sources, themselves influenced by the envelope follower, great fun !

Also in Ableton Live, using the auxiliary buses sending into themselves and each other… Less fun than VCV though.

You made me want to revisit it ! So here goes a screen shot of the one I just made, and the module selection, to import if you want, and a short recording. 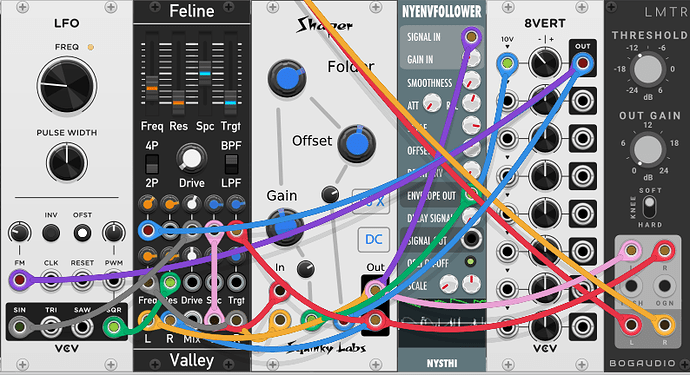 @rainlet
These are some really amazing sounds - funny enough I was looking in ppooll today, again because of this ‘laptop music thing’ I’m going through. I’ve been debating whether I want to invest in Max/MSP… right now I decided I’m too invested into Pd and its quirks to switch, but having access to ppooll is almost enough to make me want to switch. Unless I (or someone else) gets around to picking apart some of the ppoolll objects and creating equivalent abstractions for Pd (the AudioLab externals are pretty cool)…

@TanaBarbier this is really cool - I’ll definitely get around to playing with this! I always struggled a bit with VCV as a composition tool, but maybe this’ll change my perspective !

I have found Three Sisters to be incredible for feedback. Running beads or clouds back into itself has also been a lot of fun.

Beautiful! How do you prefer to get the feedback going? Are you using some kind of noise source?

Sometimes the initial hum from inserting the cable does the trick.

For the feedback to start I send the square of the LFO in the left input of the filter, and play with the resonance, then disconnect it.

I just received my VFE Klein Bottle and it is very fun.

Here’s just a quick dirty experiment with a ton of pedals of course:

The Klein Bottle is built so well!

I’m dreaming of a circuit that could signal match line level into a handheld guitar pickup, then have a small tabletop speaker you could jam the thing into, or something. Does anyone have some DIY tips and/ or tricks to share for simulated amp feedback?

I’ve been trying to find a Macumbista sound box for ages now. Wish I’d got one when he was still making them.

This presumes a desire to DIY and scrounge up all the needed tools for it, but just a heads up that the Soundbox schematic is open source. And it’s a very good beginner project! In fact, it was the first project I ever built and finished into an enclosure

The most challenging part for me was building the contact mic – my first tries failed after a couple of days until I brought out the hot glue gun to keep the wires stable.

See some more details in this thread:

I ended up getting an Adafruit Perma-Proto board and successfully moved my breadboarded Macumbista Soundbox into a permanent enclosure. The board made moving from the prototype phase super easy for a beginner. I’ll likely try standard permaboards next, but this was great (if more expensive) to get me going so far. And hopefully this is also the right thread for sharing finished DIY projects

In any case, as above I’d recommend this project for beginners - it’s the first thing I’v…

fyi i didn’t see it mentioned in this thread, but there is a nice discussion on feedback patching (& systems) here:

I recommend you try out a version of Nicholas Collins’s ‘Pea Soup’ on your system as well. Requires a bit more modules than the Vink patch, but I’d say they’re pretty much in the same vein. I haven’t tried mixing this with the Vink patch yet, but I think the method employing phase-shifters (=multi-mode filters ) in this way with negative feedback can give more dynamics to the Vink patch as well as it pushes the audio feedback into a different direction(frequency?) whenever it reaches a certain a…

thnx for mentioning Nicolas Collins. Here is Feedback Construction Kit and Pea Soup apps in MaxMSP among others… http://www.nicolascollins.com/software.htm

thanks so much for this, massive help! just started doing some prelim work for a research project im starting later this year this is going to be really useful!