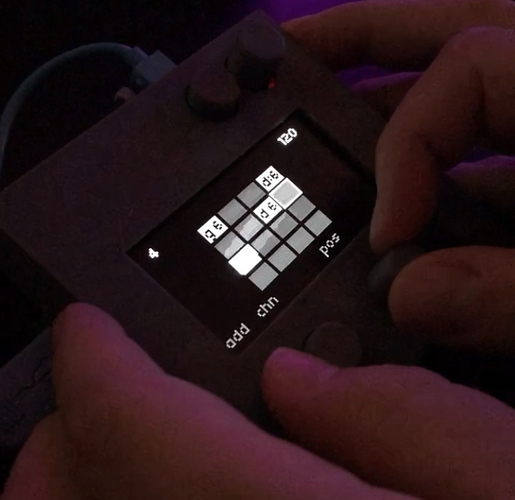 I put this together over the past few days as my first norns/lua project. It’s mostly just a proof of concept / an exercise to learn the environment, but it’s gone further than I expected, so I decided to put it out there.

It works slightly differently to nanoloop. Some differences:

Nothing, really, but the internal sound (PolyPerc) is just the default parameters, so it’s better with an external MIDI device.

shouldve made it myself actually

Loving this, it’s given me the impetus to really invest into the eco system too. I just got a grid yesterday. Next step will be to get the DIY board too.

Incredible norns shield case too should I say, did you make it yourself?

yeah I designed it, it’s available here if you’re interested (note I haven’t tested the latest version so it may be a bit off, but looks fine with the shield/pi template in it).

Haven’t downloaded to my Norns yet but just wondering if each track or channel sends to a different midi channel? It appears so. Either way nice work and thanks for sharing with the community!

Also this looks primed for future grid implementation. Looks like you could have all four sequencers going on the grid with buttons left over for other cool stuff

Yep, each track is a different channel

And I’d love implement grid compatibility, but alas I don’t have one (yet)! I’ll probably try to build one soon, but I just made a basic decoupled MIDI I/O interface script for my Roli Lightpad Block to use as a poor man’s grid

Thanks for sharing this, it’s terrific. I just used it a bit last night to send MIDI to a MIDI-to-CV/gate module on a small modular grid, worked great.

This looks so fun!
Would love to see crow support (sync in and cv outputs) as well as JF support

As a nanoloop fan I’m loving this! I wonder though why I can’t install this from maiden like other apps. At least it wasn’t there last time I’ve checked.

Scripts need to be submitted to the repo for inclusion in the community catalog. Some might not do that until the script is “release ready”