Thanks for all your efforts; I’m not certain that I’ve been getting the merged files correctly from Github

To use the code changes I got working:

And add include into other scripts, as explained on the Usage Instructions page.

Thanks very much @delineator.

I successfully installed midigrid from Github using your instructions.

When running from Awake with midigrid called as per the instructions, I get:

etc; again, only the top-left up arrow button lights up (this is in Programmer mode)

Running the led_test.lua script from the minigrid install, however,

etc, with only the top-left button lighting up as before.

EDIT: I switched the previous

And now it works (sort of)! Amazing - now to update the other scripts.

If you try
local grid = include "midigrid/lib/mg_128"
Then you should be able to switch between two halves of a 128 led grid.

I’ve tried mg_128 in Awake, and got the top-left up-arrow button lit up - pushing it or the unlit down-arrow button next to it does nothing.

However, if I then swap out of Programmer mode on the Launchpad Mini Mk3 by going to something like Legacy mode (in which the lit 8x8 grid buttons work, but with the wrong positions), then switch back to Programmer mode, I get the arrow-down button in the top-left corner lit, and the other half of the 128 grid from Awake working. Pushing the lit arrow-down button (or any of the non-8x8 grid buttons) does nothing still.

A bit of swapping back and forth between Legacy modes eventually gets back to the left-hand side of the 128 grid on Awake, with the top-left up-arrow lit (and still unresponsive).

Throughout, I get orange lights flashing across the 8x8 Programmer mode grid – as well as into the right-hand colum of > keys – in positions which seem to reflect the Launchpad’s MIDI note positions in response to Awake (this also happens in the Keys page of the Live mode, but in what I assume are correct note positions and not always in orange).

Update: using mg_128 and a freshly arrived second Launchpad Mini Mk3 works excellently well - some scripts (eg Timber Player) don’t seem to have keys light up, but they do function. Off to enjoy the wonderful Buoys script in all its glory. Huge thanks are due to everyone who made midigrid possible! 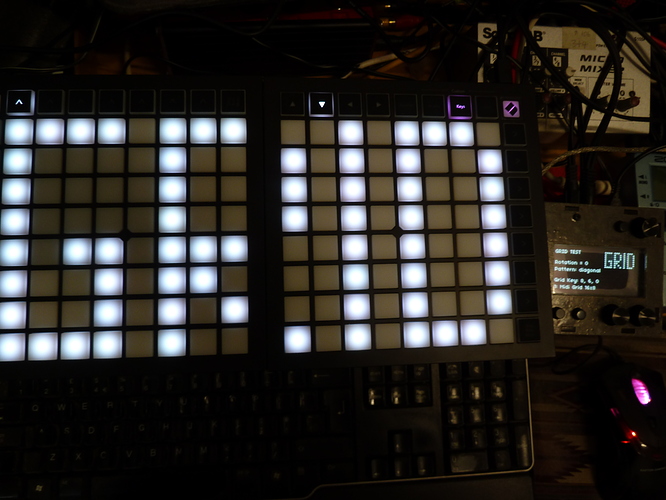 Also - kudos for @delineator for including midigrid support in the source code of his intriguing Pitfalls script:

Actually you don’t need to alter the pitfalls sourcecode to use midigrid. Instead I’ve added a grid_lib parameter. You can change the grid_lib parameter option, and save a default PSET file like so: K1 -> E1 right -> Parameters EDIT -> PITFALLS -> grid_lib -> choose between grid, midigrid/lib/midigrid, and midigrid/lib/mg_128 K2 -> PSET -> SAVE -> OK

Apologies for bringing this back up way after you resolved your issue but I have been reading this thread very closely today as I am very keen on getting MLR working with my launchpad (just standard, not pro). It seems we have had the same issue but I cannot work out what I’ve done incorrectly.

I have downloaded the midigrid stuff from github and put it is dust > codes folder. https://github.com/miker2049/midigrid

I also got MLR64 and stuck that in the dust > codes > MLR folder. https://github.com/noiserock/custom64

I then copied exactly what you put in your successful MLR64 script to override the global grid object:

Here’s a screengrab of the script. 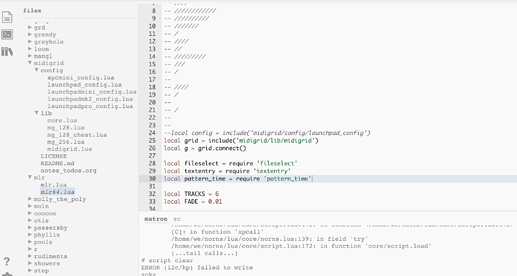 I have a very long error message from Matron, although it looks like the Launchpad is detected. Here’s the last part of that in case it helps… 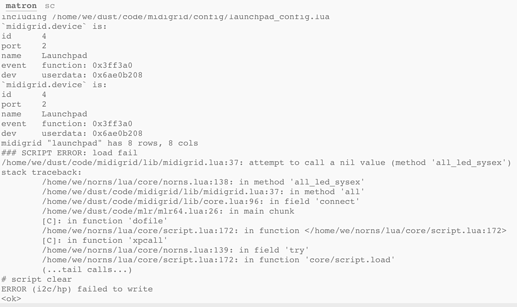 If it wasn’t already completely obvious I’m a musician, not (yet!) a programmer, the github instructions are tricky for me to follow so I may have missed something important here. Anyone know what I can try? Thanks a lot.

@sophie I’ve got a similar issues, but after reboot norns, the scripts worked fine. Have you tried after a reboot?

@beepboop when I test some of scripts (awake and zellen) the pads on my launchpad blinking sync on tempo… is that normal? in the case is so annoying.

Someone knows how to tweak this to stop the blinking pads?

I’m not sure if my patches have made it into the official minigrid release yet? Or there might be a vgrid release that contains them?

Hi, thanks!
But I’m new in norns environnement, and I don’t understand which is the portion of code you have used to fixed the blinking pads. I have a launchpad pro (mk1) and I guess I have to fix in their midigrid scripts, could you tell me more specific? Thx.

I can’t remember where I got up to with this. Absorbed myself in some of the other scripts I guess! Thanks for the advice, when I get a moment I’ll see if I can get it working with my launchpad after a reboot.

I’m already getting a bit confused… should I get the APC Mini or a Launchpad?
Which one offers better compatibility at the moment/near future as a Grid?

At the moment I’m inclined towards the APC because of the faders (even if they aren’t useful with Norns, they could be with other gear).

Faders are useful for Norns scripts that have MIDI mapping enabled.

Yes, for sure. My concern is optimized compatibility with Midigrid. All else being equal, I guess I’ll go with the APC because of the faders. Thanks!

Note: APC Mini and LP Mini mk2 are limited to 3 colours, red, green, and yellow - so cannot represent the 15 brightness levels of the vari-bright grid.

LP Mini mk3 has rgb configurable colours, and many colour presets, so can represent 15 levels with different hues/brightness.

Tbh, alt grid setup is a compromise any which way you look at it. I went with the launchpad mk2 because I’d already brought one and buying a second one S/h was easy and cheap. It does have the advantage of square buttons similar to the monome grid.

I suspect there is a bug in the launchpad mk2 Linux driver, I have no proof though but I’ve ruled almost everything else out. It causes some minor glitches / mid lights, which annoying but not a show stopper.

Hope that helps in some way?

I am a new Norns Shield user who is very excited to try using my Launchpad Mk2 and Launchpad Mk2 Mini with Midigrid. Is there a very dumbed-down, centralized step-by-step list of instructions available regarding what scripts I need to install on the Norns and how to get the Launchpads up and running as a poor-man’s Grid?

Thanks in advance for your help!

Hey! Thanks for helping. Sorry for replying so late. I ended up getting a Launchpad MK3 mini instead of the APC (got an OK deal used). This was yesterday night, will probably only be able to try it out this weekend. Cheers!

a Launchpad MK3 mini instead of the APC (got an OK deal used).

I’m using a pair of mini Mk3s in place of a 128 grid with more or less success, so feel free to ask if you need any assistance (hopefully it will just work…)

Hey! Taking you up on your offer to help. So, how do I actually proceed? midigrid-master.zip into Norns dust folder? Or another folder? What are the steps? I’m kind of lost actually… Thanks!