if your encoders replaced and cannot DIY, contact help@monome.org

solution: replace the encoder. i’m still trying to identify what happened with our assembly house with certain batches, or if this is related to flaws in the actual OEM parts.

some people have requested information on fixing these, so i shot a video of how i do it:

you can get replacement parts incredibly cheaply: 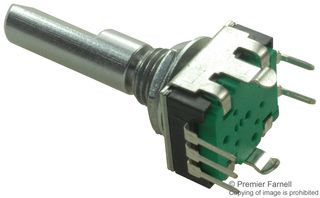 I believe I recognize this norns as my own (thanks again!). I would’ve gladly DIYed that if I had seen this video first…

I had this issue and sent my norns back to you since I’m not proficient in soldering myself. It came back and was fixed which I was very thankful for but I am now having the same issue again. Are there any other options for the encoders? I’d gladly pay more money for an option that might be more robust.

are they the same encoder position having trouble again? (ie, E3?)

i’ve been looking into other parts, though there’s no promise they’re better quality. i really can’t tell if it’s simply an issue of bournes having some badly manufactured batches out there, or if they were warehoused in poor conditions, or what.

e-mail help@monome.org and you can ship it in again.

So far I’m noticing it pretty bad on encoder 2 again. Originally it was encoder 2 and 3 that I was having major issues with. Unfortunately for me Im up near the arctic circle working for the next few months so I won’t be able to send it in until I get home.

I did the DIY replacement this week and can confirm as a mildy experienced DIYer it was a tedius job. I think my soldering iron wasnt hot enough to be fast about it but it’s done now and the encoder jitters are gone. So that’s a win.

Curious. The datasheet says hand soldering is not recommended. Why would it say that?

sensitivity to overheating, for one. get in get out quick

Just to share my experience, I have modest experience with soldering (and probably a little too much confidence

) and I just replaced all three encoders on my Norns. The first encoder was a bit of a struggle, but after that it went quite smoothly. Some advice for the adventurous:

I did make a few light scratches on the PCB, so I hope that won’t give problems on the long run, but no components or electric lines were crossed, and I tried not to overheat the PCB too much. In the end I’m really happy to have them replaced. They were very jumpy before, also when rotating them slowly, and for a long while I just lived with the bits of chaos. But now the Norns feels super reliable and solid, reflecting the careful design that went into it!

Idk if I should make a separate thread for this, but I’m having an issue w E3 locking up entirely. I can’t get it to move at all without using a pair of pliers, and I can’t think of anything that would have caused this. I took it apart and can’t find anything that could be a cause or symptom.
Should I hit it w some WD40? Or just wait until Monday to send it to Monome

email help@monome.org ! we will correct!

hey peeps, I’m ready to fix my norns encoders, and I’m wondering if it’s possible to replace them with clicky encoders? Can anyone provide the correct specs to look for something compatible?

fwiw, i did this on my shield and it’s not fun — i wasn’t patient enough to land on the “right” delta settings thru software tweaks (never mind if scripts include their own sensitivity settings), so there might be a magic combo if one put in the time, but i just abandoned it and replaced with smooth ones. we also don’t recommend DIY fix unless you’re very confident with an iron — excessive heat is what seems to cause long term failure, so feel free to email help@monome.org if you want us to repair in-house!

Okay, cool, probably all my woes will be solved with new encoders anyway

I’ll be in touch!

i would also warn against doing this yourself unless you’re very experienced soldering. minimal heat is important, and you can damage these boards by doing it wrong.

i wasn’t patient enough to land on the “right” delta settings thru software tweaks (never mind if scripts include their own sensitivity settings), so there might be a magic combo if one put in the time

i tried that and failed.

on my norns shield, encoders send incorrect values by bursts. it makes detection tricky (as opposed to random outliers) and i somehow managed to get some filtering working but it made norns unusable (large lag due to large time window of bursts, had to disable accel…).

i should also note that encoders worked flawlessly for more than a year or extensive use before E1 and E2 starting to fail one week apart from each other.

also i got my norns shield secondhand so I don’t know if it originated from monome or was built by somebody (w/ admittedly very low margin if it was the case).

bourns are generally regarded as a quality brand but i don’t know for sure about these particular mechanical encoders. it’s a similar model waldorf used (micro Q, blofeld…) and they are also notorious for failing in those units as well.

I should get my E1 sorted. It’s jumpy, and I need to face the fact.

First step toward recovery is realizing it it. Second step is admitting I cannot deal with this by myself. Third step is seeking help. Fourth step is … random between delta -3 and 3 usually.

The road to recovery is itself is a jumpy encoder… Thanks for being my Æ club, Encoders Anonymous club. Megasuperrespect to monome for being a repair-friendly company.