I’m thinking of swapping out the origin of the dust repo on-device to my own fork.

EDIT: Works! for others wanting to update, some additional commands

master is the “rolling” release branch. dust master and norns master should always be functional together. master may be ahead of the latest release.

release tags get added when there’s a release.

ack sorry, my bad, i forgot how to see tags on GH web ui.

3 posts were merged into an existing topic: Norns: update 181002

Can norns be a USB midi client? Apologies if this is an already answered question, but I couldn’t find it anywhere.

it’s a USB serial device, connect via the power plug to a laptop etc. uses ftdi.

Hey not sure if it’s just me but upon updating to today’s release MLR isn’t quite behaving right. I’m not able to load sounds into my buffers from the clip page. When I try hitting button 2 to pick the sample MLR kind of freezes. If I try to switch pages after trying to load a sample Norns does not respond when navigating with the grid. Maybe a bug? Hoping I’m not the only one here on this

you’re correct— thanks for catching that (i was testing extensively with live input, forgot to test sample loading). will get a fix right away.

Looks like this problem persists after i updated norns to 181002. I suspect it might have something to do with the Push 1 using two ports. See the attached screenshots of max and pd’s midi connection screens vs the norns midi screen. Is there a way to specify “Port” in norns? 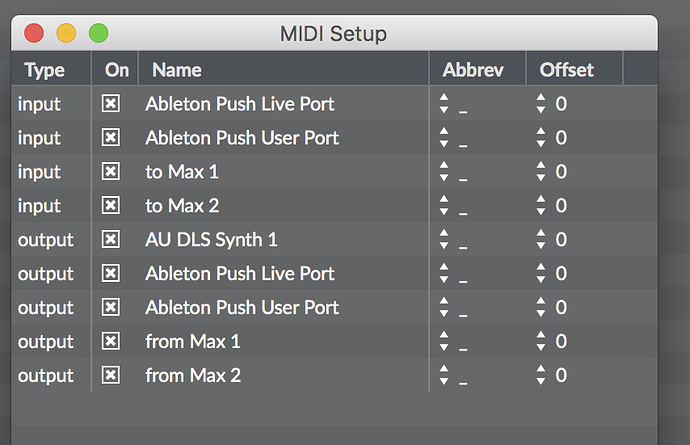 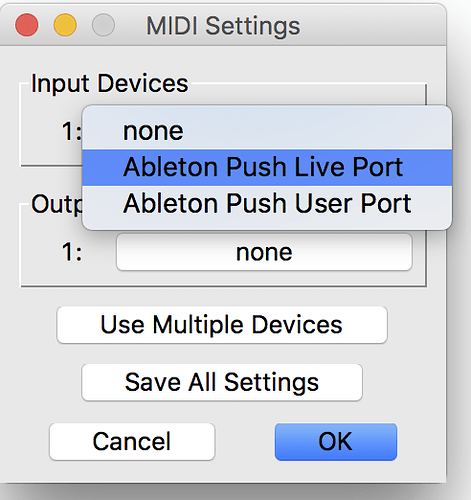 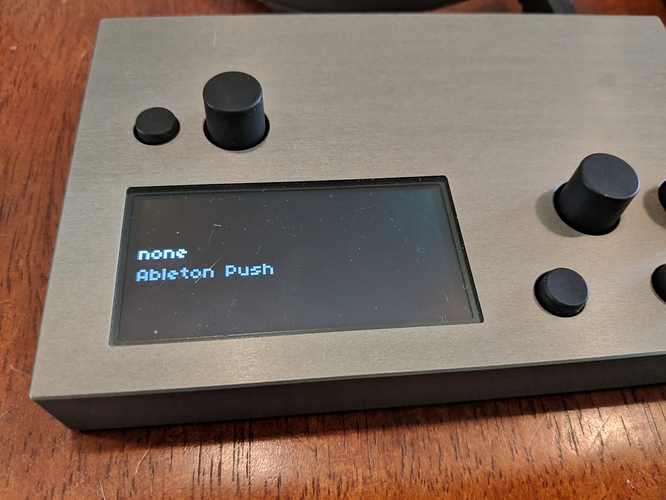 I suspect it might have something to do with the Push 1 using two ports… Is there a way to specify “Port” in norns?

Issue: unable to use all usb midi ports

I think I can see port 1, but its name has been truncated to “Ableton Push” from “Ableton Push Live Port” the live port is for Ableton Live. The second port “Ableton Push User Port” is the one that is useful in all other applications.

Thanks for the help!

how do i integrate my Touche with norns, as in the video by @tehn ?

oh goodness, i suspect we don’t have documentation for param midi learn anywhere? ah, i apologize.

this method will change slightly in the future as i’m redesigning the parameter menu system with @markeats presently.

thanks, is there any configuration needed? I bought the nub you linked to but it is failing on both hotspot and network.

ha ha - didn’t even realise there is a midi mapping mode. Nice!

Have you inserted it before powering up? That’s the key for making it work.

@spinos it would be very perplexing for that wifi nub to not “just work”. did you boot norns with the nub inserted? have you connected via serial before? (i could walk you through some further debugging). or depending on where you are, i can just send a replacement wifi nub (it’ll take awhile if not in the US).

@tehn yeah I booted Norns with the nub inserted. I’ve connected via serial before and could try debugging it that way if you tell me how. I’m in LA but I can try debugging before you send a replacement since it should work, thank you though