I’m anticipating receiving my Norns Shield. Getting pretty excited to dive in when I get all the parts together. There is a windows software looper I used to use called Ambiloop. ambiloop 1.73 by Christopher MacDonald - YouTube It won’t run on Windows 10 (at least the last time I tried) I liked it for the following reasons:

A couple of common things I would zone out on:

A cursory look at what’s already been done with Norns it seems like all the building blocks to do this are out there? (maybe something similar exists?) I have some programming experience (mostly JavaScript). I guess my question is: If I wanted to build this where do I start? Should I start diving in to Lua? Softcut? I’m really kind of starting from zero here. Could Norns handle doing this with 8 2 minute loops at once? If not I’d settle for 6 or even 4.

Thanks! I will check this out. This might be the very thing.

I’d love a simple stereo in/out autofader. I’ve longed for something to fade in and out my loops from a looping pedal or from an iPad. Controls would be e2 fade in time up to 60s, e3 fade out time up to 60s, k2 would trigger the autofade, toggling between fade in and fade out. A bonus would be to have k1 enable a stereo low pass filter with e1 setting the lpf frequency. k3 hold/shift function could possibly use e2 and e3 again to set a lfo speed and depth for filter modulation. Very slow filter sweeps if possible? Longer fade times would also be great, along with midi trigger of fades. It might seem wasteful to tie up Norns with such a mundane task, but I really would find it useful.

Okay here is a script idea that makes me absolutely wish I could code. If anyone would be interested in picking up I would be eternally grateful, bit it would be a lot of work so I might just have to get learning.

It’s a three card draw droning tarot script. Create a drone that will tell your future.

Press a button, it randomly chooses three cards. Probably just the major arcana (the hermit, the fool ect, as opposed to the three of wands ect.) because it keeps the amount of cards to be created to a minimum.
The first card is your sound source, the second card is filtering/effects, and the third card is modulation of sound source and FX.
Each of the 22 cards would have a unique associated synth engine, effect, and lfo waveform/speed. It’s position in the draw would determine which one is used. The specific sound, FX and mod associated with each card would have some relation to the meaning of the card.

Perhaps this is more clear with an example. I’ll use the first card in the deck, The Fool. This card represents setting out on a new journey in a fervour that you may be ill prepared for. It denotes new endeavours, beginners energy, folly, fervour and even delirium. 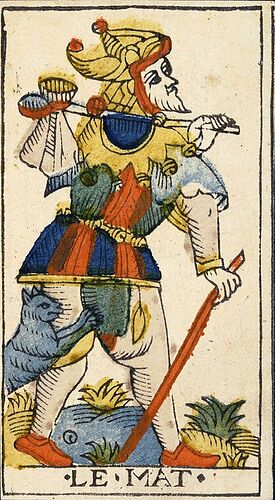 Perhaps with one knob and button you could scroll through the draw and select a card to get a very brief description, to aid the fortune telling aspect of the script.

The whole point of tarot is that the meaning of three cards combined is far far deeper than any one card can be. I love the idea of three cards in one order creating something very noisy and chaotic, and those same cards in a different order could create gentle ambient sounds. Certain negative cards like The Tower will always add a bit of chaotic noise to any draw, as it will always add an air of gloom to a tarot draw.

Edit: finally I will add, can you really have a device called Norns and not have a fortune telling script on it???

Omg, I have a notebook of ideas for scripts, and a tarot script is the first thing in there!

Along with the Tarot idea, if its Norns, surely it should be runes that is its divination script of choice?

Easy to show as a graphic too…

However, I think Eno’s Oblique Strategies would be a fine addition as a script with musical consequences

at some point a non-musical version of this existed for norns. can’t remember who wrote it, but it was definitely a thing lol

oof, I love this idea… and there are so many different ways one could interpret the cards (also reversals!) that I can imagine doing something like Dronecaster to let people create alternate decks… with accompanying 42x64-pixel grayscale images… woah.

@synthetivv I know just thinking about lil pixel art cards is making me excited!! I definitely had dronecaster in mind while thinking this up

@spamula runes would be cool but the way they are cast and interpreted tends to be so much more open and the meanings more elemental so I had a much harder time coming up with musical interpretations. Also, tarot cards have a tradition of being reinterpreted and adapted into many different versions, while runes have specific religious significance based in historical writing, with little culture of adaptation so I would feel less comfortable making them into a synthesiser!

@nonverbalpoetry I wont mention an I Ching version then and three Norns, one running each divination practice and working together

I used to use all three quite a lot when I was doing those type of things. In the intervening years tho, someone stole my Crowley tarot set, books, runes, etc etc. I shoulda seen that coming

@justmat Ha! Inevitable that someone would have already done it I guess

I have a pack of the real cards here so it was kinda moot for myself anyway.

I wonder if it could just be baked into the Norns start-up sequence - a random strategy appears before the Home page, K2 to refresh the pack & get another, K3 to accept/dismiss & go to Home. And options in Settings would include not showing it at all…

If the Cthulhu awakens because unknowing people are running their synths… I’m ready for it.

@Justmat @spamula in yggdrasil you can draw an oblique strategies card simply by typing “oblique” + enter : )

I enjoy this sort of liberal new-age mix-and-match of belief systems. Very postmodern

Maybe also Maradona, St. Mary with baby-Jesus or Mohammed icons could jump out at random and drop some sick frequency modulations and envelope generators?

Had a dream I was visiting a friend and he showed me a tape deck he found at a thrift store. He called it the Coolpix (somehow related to the Nikon coolpix series of cameras). It was a portable deck with an extra set of buttons that you would play like a trumpet and this would engage different play heads at different intervals of the tape. You could also pitch the play speed up an down of course!

different play heads at different intervals of the tape

i hope each of them plays back from a different channel too ! !

Is it possible to add in a feature to a script similar to the global PARAMETERS > MAP function but for crow’s inputs? Would there be a way to hack the code to be able to map multiple parameters to either of crow’s inputs? Or would it make more sense to try and add that into a specific app?

I’m hoping to take a crack at it, but not even sure if this is possible or where might be a good place to start.

@mbillz helped me add that (cyrene/crow_io.lua at master · 21echoes/cyrene · GitHub) to Cyrene. Would probably not be too hard to adapt to your script. And probably not even that much harder to abstract to something very similar to Arcify for anyone to drop into their script with ease!