Would it be possible to have an option when looking at apps that have CC output there could be an option to press a key and have the Norns send the corresponding midi channel and CC output when pressed?

I use Ableton Live and mapping midi CC can be a pain if you don’t have physical knobs. Could make midi mapping a breeze… well for me and other Ableton users, Not sure about other DAWS and mapping.

Im not sure a single ping will do it but it should. That or the Norns could send the CC and do a sweep from min to max so the daw can register the movement.

is this too niche of a situation or could this be a useful addition for other apps as well?

easily done with a param!

just to tie the threads together, here’s a “cc bang” param example

not an ableton user, but if i understand correctly… you can use a trigger type param to send a cc value when triggered. select the thing to map in ableton and then trig the param. something like… params:add_trigger("x_cc", "x cc") params:set_action("x_cc", function() midi:cc(cc_number, cc_value, cc_channel) end) would send out a cc “bang” when pressing key 3 on the x_cc param in the menu.

If you haven’t checked it out Zellen is a cellular automation based sequencer.

What particular part of Cycles are you hoping to approach on Norns?

Cycles is basically a loop player that can play sequenced segments of a loop, and a granular synthesizer. Both of these can have a multitude of modulation and fx (which can also be modulated).

There are a lot of loop oriented scripts on Norns and several powerful granular scripts. You could make (probably?) any of the sounds that Cycles makes with Norns, but the workflow would be very different.

Is there a particular feature of Cycles that you are looking for, or a video clip?

I am heaps into what’s happening here 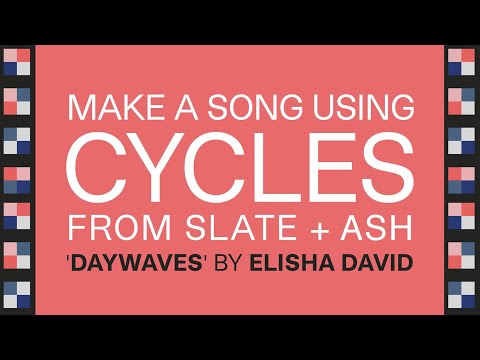 This pairs really really well with arcologies! I was using cycles instead of crypts and was lots of fun!

not sure if it had been discussed before… but given that the tempo does not drastically change while recording with tape, it would be very nice if the bpm was automatically included in the name of the recording.

i stumbled on a website called www.hooktheory.com which shows chords and melodies for songs, and let’s you see the relationship between the two. here’s “nude” by radiohead as an example. was thinking a script based on this would be pretty rad, like pick a scale and then you can choose chords in that scale and have kind of an awake style sequencer, while being able to see which notes are in the chord while writing the melody. could fit together nicely with grid as well

in what sense? can only speak for myself but I rarely record/play music tied to a bpm on norns

i can give an example. yesterday i was clocking norns with an external sequencer and using that to sequence icarus synthesizer on norns. i created some interesting looping parts and wanted to record some of that using norns tape, so i may use those samples later. i could have just noted the bpm and manually entered that in the file name or something to that effect.

i then figured; if the bpm was not manually changed while recording but only naturally fluctuated slightly, then norns could automatically note the bpm value and appended it to the file name….

to what end you may ask? well, i wanted this so i could later potentially set the project tempo based upon that bpm when using those samples with a different norns script or on a different instrument besides norns.

i suppose this goes along with my wish for norns tape to somehow communicate with certain scripts so that recordings captured in tape can loop as seamlessly as possible (quantizing record start + end in some way)?

Sorry for the maybe not super helpful reply here, but you could do a lot (any?) of these sounds using any of the granular scripts on Norns (I’d start with Granchild, maybe?) as well as Cheat Codes (playing with pitched variations of your loop). However the video you linked points out why using Cycles for this would be a lot easier. They’re using the presets in Cycles, and you won’t have presets to work with on Norns. Nothing here is very complex so you could definitely get there pretty quickly, but what you would get is some audio recordings that you’d then need to cut up and lay out in your DAW.

So if you have Norns you definitely have what you need with the scripts that exist to make sounds like this, but it would still require a bit more work to realize it mostly because of the lack of presets, and the fact that depending upon which specific granular effects you may want to apply, you could probably get closer to your intended result by using multiple scripts.

thought: a way to access matron repl from norns itself, with the output showing on the screen. In the system menu maybe? would allow you to plug in a keyboard and do things like rotate the grid on the fly

Norns/Grid would be ideally suited for a complex harmonic sequencer. Coming from a Jazz background, I’ve always found that existing sequencers, while very complex regarding rhythm, are rather simplistic regarding harmony. After discovering CC2 (by @dan_derks) I quickly began to realize the potential of the Norns/Grid ecosystem and started daydreaming about a new way to sequence harmonies.

I took the time to develop a concept for such a sequencer. It combines a comprehensive step sequencer with a quick and flexible way to voice complex chords. It’s basically a vehicle that allows one to program a complex rhythm over Coltrane changes in a 7/4 time signature within a couple of minutes.

I’ve attached a manual of the feature set and user interface - hopefully it’s easy to understand. Unfortunately I don’t have the time nor the skills to program in Norns and hope that someone else will pick it up and develop the script. I feel like that a lot of people would benefit from such a sequencer.

Edit: I’ve streamlined the feature set and user interface and uploaded an updated manual. I’m aware that the chances of someone picking this up are pretty slim given the complexity of such a script. Nonetheless, it was fun to design the ‘ideal’ sequencer and I wanted to put the concept out there.

Modeling the physics of a chaotic pendulum and harnessing it to drive musical systems.

Multi segment pendulum with outputs assigned to the nodes of the pendulum: notes, midi CCs, parameters of synth engine.

Have never programmed anything before. Am going to try creating this.

@Syntheist, i have a double pendulum running on norns and am happy to share if you’d like some half baked code.

That would be a great start thanks!