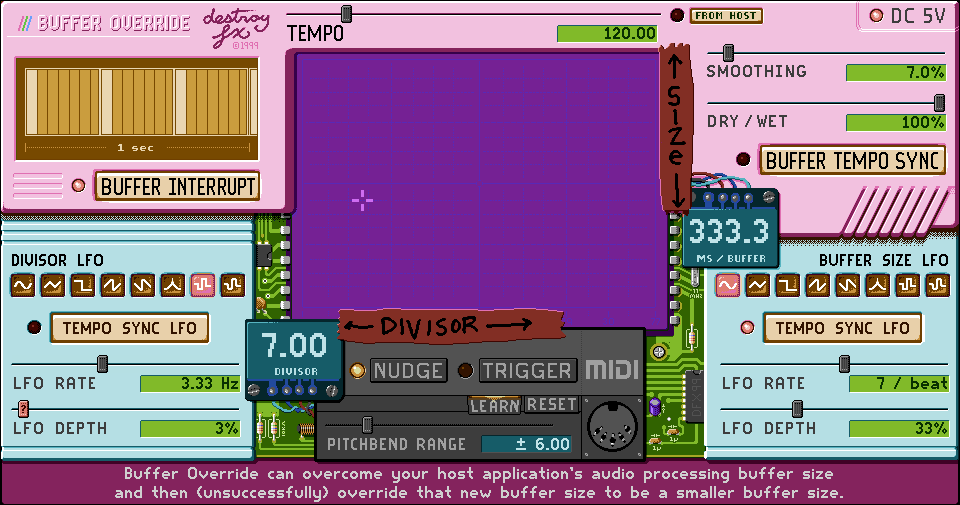 Rejoice, for Destroy FX has updated their free plug-ins, including legendary...

The sacred timeline has been restored. The greatest, strangest, glitchiest, most destructive plug-ins of the early 2000s are here with 64-bit support for Mac and Windows, Apple Silicon support on Mac, and UIs that look even more horrible than before....

Is there something like the buffer overdrive on norns? I guess like corners script with how the grid works but as a filter or mangler

It seems like you can put basically anything in a mod, so I’ve been toying with the idea of porting a Softcut delay like halfsecond.lua (awake’s delay) or firstlight.lua (first lesson’s glitchy delay) into a mod, so I can run it at the end of any SuperCollider powered script without modifying code.

Seems like a terrible idea for distribution - people would need to know the implementation of the script they’re using and whether it would conflict (i.e. is the script already Softcut based) - but also maybe useful and cool just to hack on…

i’ve been thinking of something similar with hnds, give any script 4 LFO’s. i haven’t looked into mod implementations yet, so i don’t know what’s involved, but it sounds cool to me

almost certainly terrible, but you could minimize this by doing something very fiddly like scanning the script’s code for the word softcut and not activate it if found

^ Now we’re getting into true deviance

Just wanting to throw this out there. I’ve been thinking about sum a lot lately, and I’m wondering if anyone has thought about porting it over to norns. When norns first came out, I thought it was probably just too complex (though I really have no knowledge of the complexity of max patches or norns scripts). But given the complexity of CC2 and o-o-o, maybe it’s possible? Or maybe it’s just wishful thinking…

Hello everyone
I asked this question in the Monome group on Facebook but nobody there has seemed to know the answers.

Im just wondering if it would be possible to

this is all, have a nice weekend everyone!
thank you

The tape section can’t be used as a 4 track in its current form, but there are some scripts that let you do tape ish things, such as reels and waver. Not sure about the radio, sorry.

sorry i mean only as a 4-track in the sense that you can select the speed at which the Tape section is recording the incoming audio - not everything else a four track offers, just the speed

and NO i do not want an OP-1 lol, I have too much or rather I have everything I need already, just wondering if these things were possible

If you don’t need multitrack, are you just talking about recording at different sample rates, then?

i dont know, would that create an effect on the recorded material?

on 4-tracks there’s a setting to choose what speed the tape heads are moving while recording the incoming audio (High, Norm and Slow) as you can see here on this screenshot 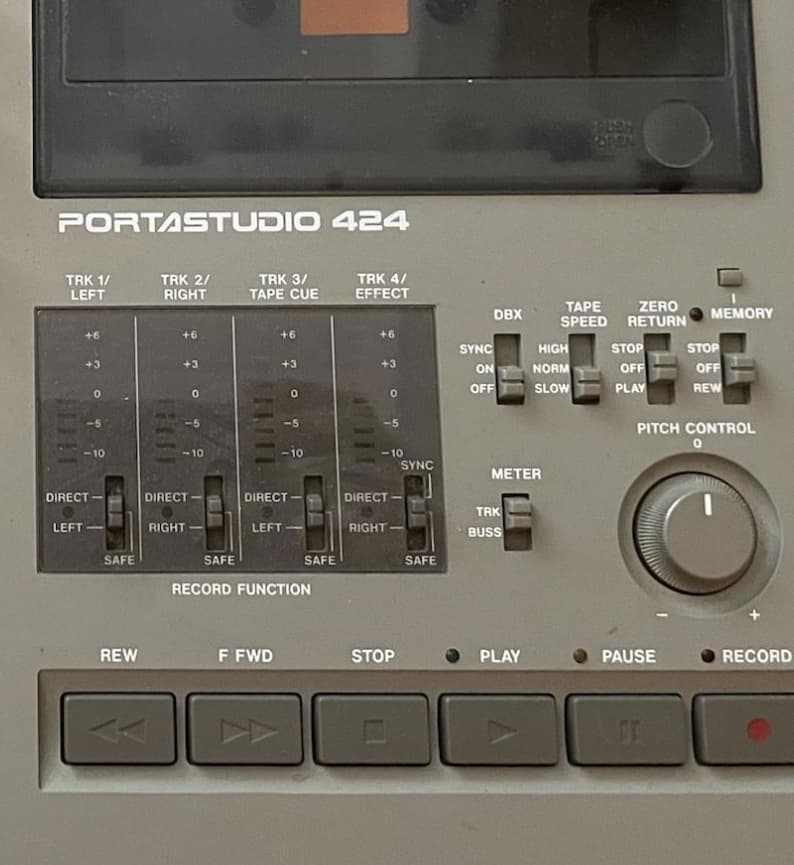 Tape does not offer this, no. It just records and plays back files as they are.

@OnetwoOnetwo norns can record and manipulate audio using softcut. Take a look at the softcut studies to get an idea.

ok well i just thought it might be a nice feature in a future update. i dont really like to mess with the coding or anything in order to do stuff like that. ill have to find a different approach to achieve this or the radio signal thing

Well, maybe someone can take inspiration from your thought if you don’t want to work on it. I’d recommend checking out Otis for changing speed while playing back

Maybe I’m not understanding what you’re asking for – there are many many scripts that let you change playback speed. Is there something else you’re looking for?

have you looked at reels, rpmate or ORTF?

nope not yet, im only up to “M” in learning the scripts for norns. Excited for what is ahead though. I was just thinking of if it would be possible to have those options available in the Tape section and how for me personally and others I suppose would make it much more awesome than it already is. Along with those thoughts of an internal AM/FM radio to sample off of.

(its a wip: GitHub - schollz/mx.synths: norns script for polyphonic synths)