Ah, that’s a shame. I will hold off until the next release, in that case, and work out an alternative, in the meantime.

Thanks for getting back to me so quickly, anyway.

fwiw the update takes less than a minute. just ssh in, cd to the into the norns directory and:

Hey I’m rolling with a pi 4 shield I just got two months ago from monome . Was working did the update all I get is jack fail. No boot sound reflashed sd still nada.

Not sure if this is the right thread for this, but I’m trying to connect my neighbours Keystation 49es to my Norns Shield (latest version [image from this thread], on a Rpi3) to try me some Sacred Cyborg Harmony <3 aaaand it’s coming up in amidi but not in the Norns menu. What can I do? 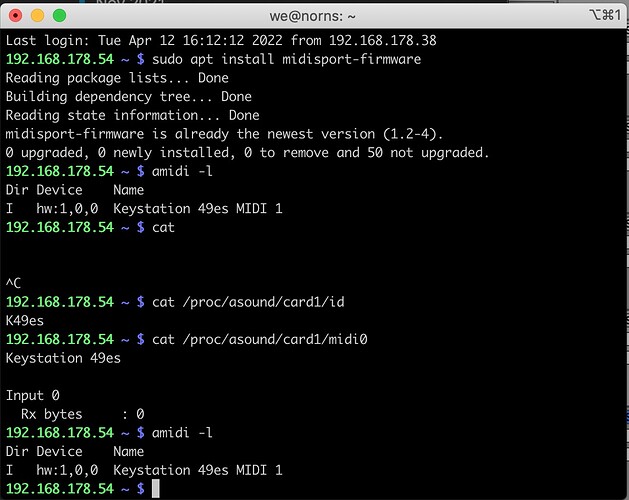 If you’re talking about the menu for the midi target in the script itself, make sure you start the script after the external Norns os already knows about your midi device. The script reads the Norns list of midi devices on startup.

The device is not showing up under SYSTEM > MIDI… so that’s not it!

Excellent idea! I want to connect to my neighbors Bluetooth speaker

Excellent idea! I want to connect to my neighbors Bluetooth speaker

btw am I missing some info here? I get this is a joke, but am I trying to connect a peripheral which is def. unsupported? (like a BT speaker)?

it should be supported as it looks like a class compliant USBMID device. but there could possibly something strange about that particular device.

You can also check lsusb and then lsusb -v to see how the device is presenting itself.

In theory you should get a message in the Maiden REPL window when you plug the keyboard in.

You could also try using a powered USB hub just in case the keyboard is trying to pull more power than the pi can provide (wild guess).

Thanks! Looking at Matron while plugging in gave the following error:

Thanks for responding. My sheild says 211028 in the top left corner. I bought it in march I assume that it is the revision build. Using raspberry pi imager. Tried twice once with each pi 4 build still jack fail. Any help appreciated and thank you.

sorry to hear about the continued trouble!

after flashing the card again for good measure, please make sure to disconnect any connected USB devices while booting the shield – there’s the hotfix update which you’ll be able to get after it boots without the jack_fail via SYSTEM > UPDATE, but the fresh image is the version right before that.

beyond that, if you received the full Pi4 bundle from us + you’re using the PSU we included in that shipment, the last ditch at-home troubleshooting would be to test with a different SD card. otherwise, happy to swap + further troubleshoot via email: help@monome.org

I have a similar situation, using a 8gb SD card and have definitely expanded it, have 3gb of audio and a few 100mb of code and data, but it says I have 6.1g used and only like 600mb left in dev/root/

Do you by chance have mx.sample installed with a bunch of the available instruments downloaded? I couldn’t figure out where all my storage went and it was definitely instrument samples I never use.

Edit: guess that should just be in the audio directory though

Have you checked the size of the system logs? I just had my norns shield completely fill its storage because of excessive logging. In a ssh terminal I went to /var/log and then did ls -lahS. In my case the kern.log was several gigs, filled with lines like this:

With thanks to help from @dan_derks it seems this logging is related to some fault (cable?) in the usb connection. I cleared the logs and reclaimed the space.

ah interesting thanks, will check that when I put the old card back in.

my intention was for the log configuration to limit the size of logs, but something may be failing. i can look at this. in the meantime, if you need to clear up space by deleting logs, feel free to: