Use --desktop when configuring and building matron/crone. Use matronrc.lua to configure gpio/sdl input. (Or use OSC only.) Manage supercollider/jack urself (incl. Install norns extension classes)

This is not a user friendly feature at all, and likely never will be unless someone else wishes to port+package. You can consider it an alternative to the docker method for virtualization/development. Can discuss further but not now and not this thread.

and yeah, improved performance metrics also motivated by existince of this optino and future need to describe performance requirements of scripts/engines/mods.

I most appreciate the commitment to backwards compatibility. I keep putting off buying a Norns shield because my studio is so full of pieces that get far too little attention. (I already have a Pi 3B.) However… I could really use a well designed music computer, even if that means switching from puredata to supercollider. If it takes so long that I don’t see one before April, all the better.

I guess I’m not putting off that Norns shield purchase anymore.

thanks for bringing this up— i meant to clarify the situation.

yes, raspberry pi changed their port order for the 4, for some reason that had wide ramifications to a world’s worth of existing cases.

luckily, it fits and is functional in our existing case. however, visually it’s not as coherent as with the pi 3B.

we had the cases made far before we made the commitment to supporting the pi 4: this whole edition has been a constant negotiation while we contend with evolving supply issues. normally we design for maximum visual coherence, but in this case we’re not inclined to waste a very large amount of plastic (and money/energy) to re-run a universal case.

particularly because of this two-minute hack using just a box cutter, where i removed the separating supports and straightened the top edge: 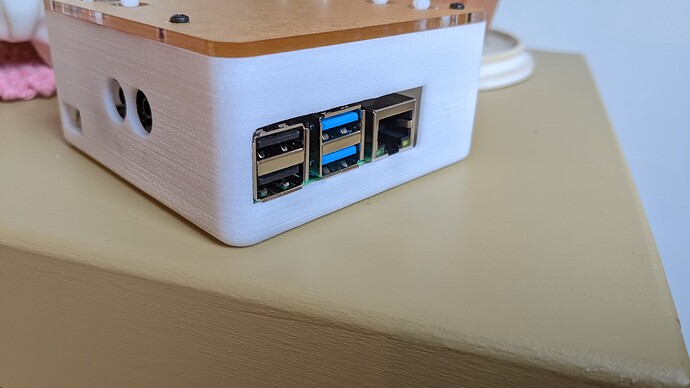 i’ll put together a little video of how to modify the case if people are interested!

the source files for the case are also now in the repo if anyone wants to edit and print variations!

The real update and “futureproofing” would, i think, to be able to downgrade the hardware, not update it – norns on RasPi 2B?

Much respect to @zebra, @tehn and other wise, skilled and composed folks at monome. Keep it up! And {$GOD_OF_YOUR_FREE_CHOICE}speed. New norns devices is a welcome thing in itself, I’m also glad there will be new norns people here soon

as computers get faster, code tends to get worse because “it works” despite perhaps burning heaps of extra energy. given the times we live in, writing better code is imperative— and what better way to achieve this than through community art-making.

Thankyou so much for articulating this so clearly. It’s one of many reasons why I’m really enjoying being a part of this community

Thank you monome team for your labor and love.

and we believe the noise performance is good. but generally, most people will not notice a difference from the previous generation

@tehn Could you explain a bit more about the above comment? This seems contradictory to me, though my apologies for I hope I am not misunderstanding.

I’m a current lover of the shield, though an enormous obstacle is the issue of noise (shield, March 2021). I’ve done the obvious (signal path, levels, etc), and scoured the threads for recommendations with things improving only very slightly… But the noise is unfortunately still too much to bare, especially for live input. I’ve been anticipating the new shields solely based on the aforementioned handling of noise, but thinking I should hold off until the stock norns arrive…based on your comment above?

What psu are you using? I’m sure most of the noise issues are down to shitty psu’s - meanwell minimum

I have an older shield and have had zero issues with noise. So you might have something else going on.

I’ve heard many occasions where ppl are using shield in an minimalist/ambient context, where noise would be apparent - and have no noise, yet others seem to feel it is a big problem even with proper psu. I wonder if there is variability from unit to unit, but I hope that the above is true and that it’s more of a psu issue. I suppose it’s also possible that “proper” psu’s can vary, so trying another could be a good idea even if one thinks theirs is “good”

I have a feeling also that the mains power in some houses/locations is dirtier than others, and can cause problems even with the official pi supply. Maybe, that’s mostly based on a hunch.

the mains power in some houses/locations is dirtier than others

This. I wonder if there exists a battery with the proper voltage. I run a lot of gear off batteries to mitigate noise issues

edit: some of the troubleshooting mentioned in my original post above also include using a portable battery.

Well the battery takes out the psu as a possibility

@proxemia i apologize for the vagueness of the initial post— you’re correct to call it out.

new edition is a new codec which has better measured characteristics (and is more expensive, hence the price increase). it’s also balanced, which simply means extra op-amps to convert from single-ended given we’re using TRS jacks with stereo signals. the gain-staging is tuned to be louder both in and out, so there should be some slight noise improvement.

all of that said: if you have a second edition shield, there’s likely a solution to get good noise performance and we can debug that.

second: the shield is a DIY kit built for a cheap consumer computer which doesn’t have noise as a priority. for example, there’s a WIFI transceiver and power conditioning was designed to meet the needs the board. the newer shields do a good job of isolating, but they’re not perfect.

if “professional” is the grade desired, i’d highly suggest the built, original norns when it comes back into stock— which is where we invested a huge amount of engineering time.

edit: there is the possibility that manufacturing or component defects could cause some amount of noise. it’s important to quantify noise issues with numbers— not just recordings. furthermore, if people want to change the gain stage amounts, i can help people navigate switching a few resistors (if this is something that’s already comfortable territory, i mean. i’m not intending to make a beginners’ guide to circuit hacking.)

Interesting. I’ve feared this was the case but I’ll do some more troubleshooting (trying in different rooms, or even places).

How is the signal balanced with stereo TRS as the input/output?

So the I/O in the shield is still unbalanced as before, it’s just the codec part that expects (and gets) balanced signal in and out.

Hi to everyone! I am looking forward the next Norns shield. I am one of the newbies here.

About the case, do you really need to cut it? I mean, it’s just an aestetic issue or you need to cut because one of the usb will be covered? If that the case I would appreciate the video, I am very clumsy.

cutting not required! fits as is

I just received my shield and the case doesn’t seem to fit right over the assembly. I noticed it still has the separators that were mentioned as being removed above. Was it decided to leave the cutting to the user after all? If so, a video is kindly appreciated