yep i just bodged some wire into the board where the buttons go to use momentary switches. I stalled on this build, but yeah I was planning on breaking out the 1/8in stereo jack to two 1/4in jacks. I was also planning on bodging that by cutting up a couple of trs cables. And yep i did as described above. The switches are fixed to the case and loosely wired

Yeah wasn’t thinking of tap dancing over the pcb ^^ Did you meant this script? Pedalboard: Chainable FX for norns

Your design is dope! Is there a way to make the connection without the cable on the outside?

Cool, thanks for the info! Was thinking of doing the same with the audio jacks but decided to get a working board first and then start tweaking it. I’m working on a fully controlled midi pedalboard with an hx stomp and was thinking if its even possible to switch between norns scripts via pc messages or via osc?

I wonder if there would be a way of re mapping each encoder to a pair of footswitches with +/- functionality… Press up for a right turn single value change, down for left turn, and if you held the button it would fast scroll up or down… Don’t know how useful that would be…

I guess before looking at HOW you’d use Norns in a pedalboard environment, it’s worth thinking about Why…what can it do that other devices can’t do? Does it lend itself well to this use? Is the latency and reliability suitable?

I think it can be, but most of the things I’d want to do with the norns in that environment can be achieved more suitably by other devices, like the Zoia, or Microcosm.

Stuff like Cheat Codes, Granchild etc could be tweaked for live use in a great way.

thanks @Doom . I guess it’s not that hard to do. You would have to attach the USB of the CV Pal in another way or move it to the inside. Soldering experience is a prerequisite. Only the connection to the rpi is a bit tricky. You need a flat usb cable that goes through the case to the port.

I tried to print it but the stl is just the part you have added.
Where can I find the “norns-case.stl” that you import or do oyu have the final stl ? 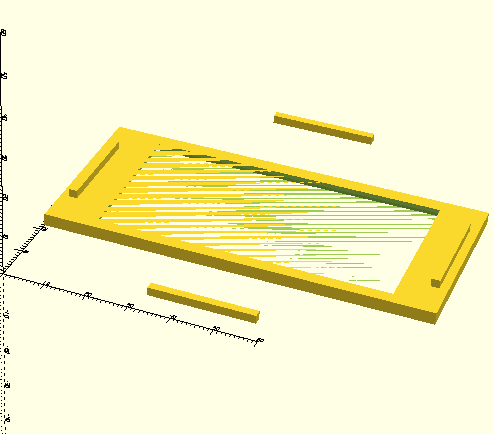 @Nordseele I would love to know more about these 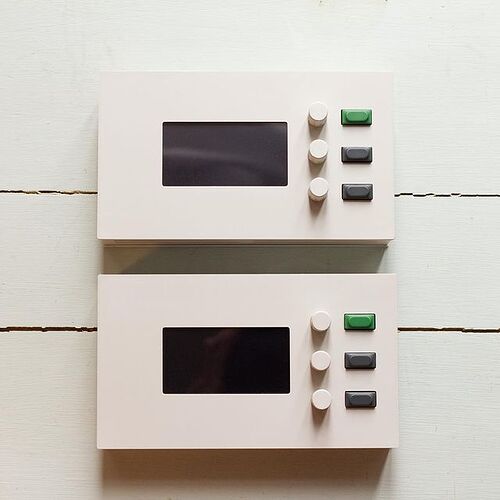 These two devices are not based on Norns Shield actually, they’re based on “NordHat”. But yes it’s Norns that is currently installed on them and they’re RPI3B+ based devices w/ 3 encoders and 3 switches made for using Norns.

NordHat is an un-released project from 2018-2019. I was working on this while @Okyeron was working on Fates, we actually shared many informations about our respective processes at that time but while the two devices obviously share some similarities, they’re different.

NH had a “sandwich” conception, two PCB attached together with standoffs between two aluminum panels. The NH “audio expansion board” sitting right under the main PCB (OLED + encoders and switches) was supposed to be easily replaceable with another audio expansion board like an ADAT/lightpipe IO board for example or two stereo jack + a battery pack. But I’m still using the original audio exp. board based on a WM8731 chip and I have never designed the ADAT IO.

End of 2020, I bought a 3d printer for another project and thought I could also try to use it to complete the “Nordhat” project properly.

I’ve never been satisfied by the choice of switches I made in 2019 and have always wanted to replace them with another model. I didn’t want to send another revision of the PCB to the factory because for me this is on old project, I’ve moved on, and the old Kicad files got corrupted anyway… So, in order to include the Marquardt switches that I like (the ones found on any Clavia/Nord devices) I decided to hack/drill two rescued sets of PCB that I had, made a few other changes etc.

While designing the new enclosure I stumbled across the whole catalog of the work of the designer Dieter Rams (Braun) and this (and some Japanese vintage audio devices) has inevitably - very loosely : P - inspired the color scheme and other details (ventilation holes etc.) of this new enclosure. I also cut a large hole on the bottom panel to provide quick access to the micro SD card of the Raspberry Pi. I have made two copies of these “Nordhat custom” for my personal use.

Some technical details:
The enclosure is printed in six parts on a Prusa Mini with grey Matt PLA NX2. The encoder knobs are printed with the same material.

The internal “sandwich” hasn’t changed much and is now attached to the enclosure with threaded inserts. The display protection is 1mm glass. Dimensions: 157x90x33mm / Weight: 295gr. 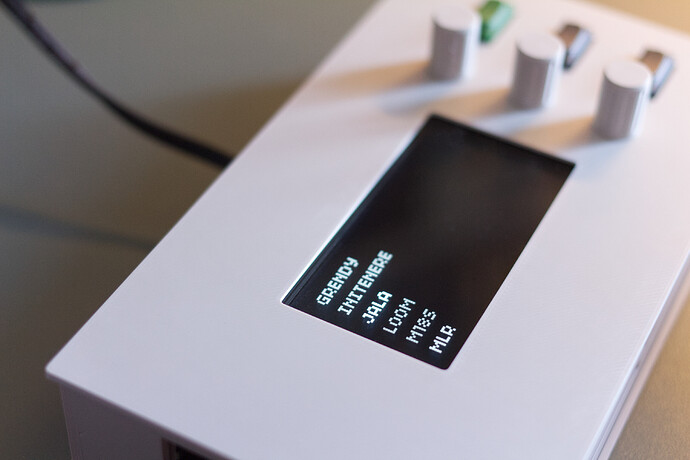 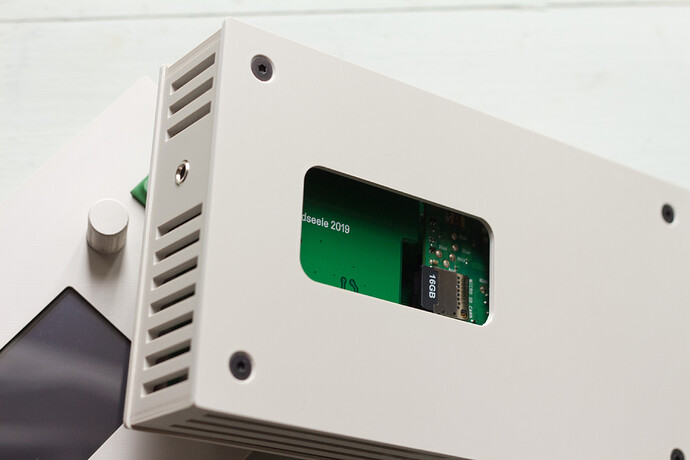 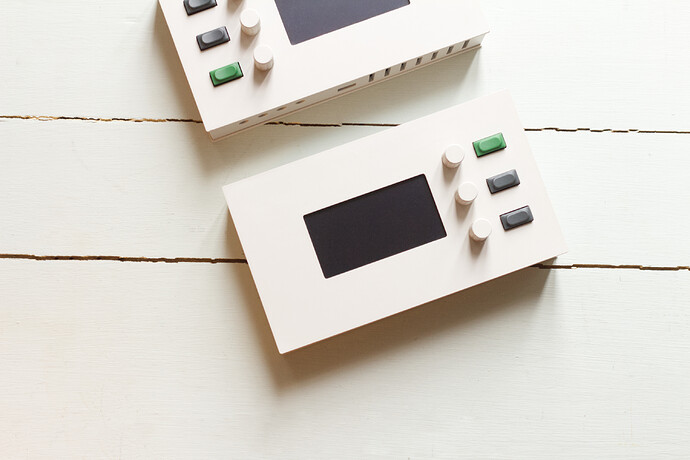 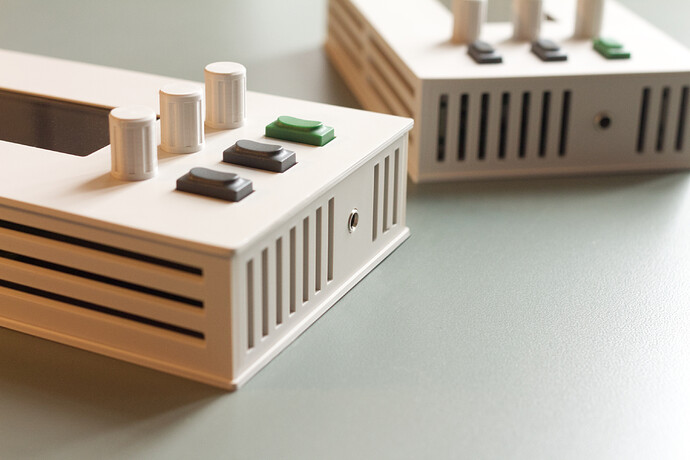 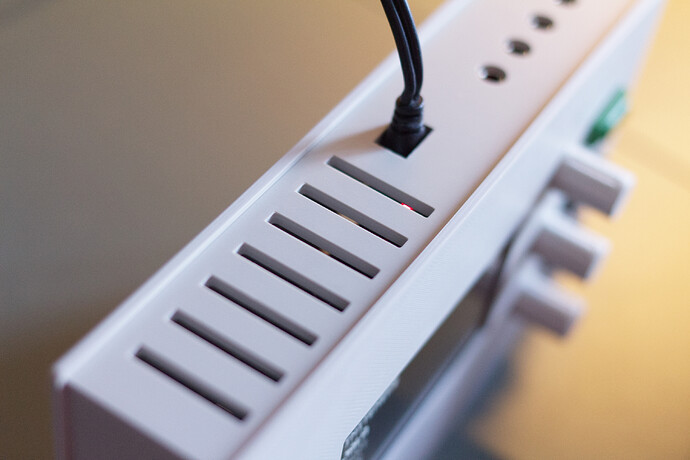 I‘m impressed by the print quality (beside your design).
I have a cheap 3d printer (some clone) and although I improved it with some new parts and played around with all kind of settings I never get these plain surfaces like you.
Did you have to tinker a lot with the Prusa mini to get this quality?
(Anyway I guess I have to get back to research a bit about recent 3d printer as the prusa Mini isn’t expensive)

Edit: I just checked the pla you mentioned. It says that it helps to get rid of layers. Is it a big difference to standard pla?

Yes the Prusa Mini is quite cheap, the downside being the two month waiting list to get one but that’s worth the wait I think. I didn’t want to invest much for my first printer, this one is sturdy, has a good firmware (w/ WIFI soon) doesn’t have too much flaws I think but it’s hard to judge, I’m a newbie in 3d printing.

The only improvement I have made on it is an E3D Nozzle-X, this upgrade is recommended, especially if you’re gonna print with some abrasive filament).

Now to get these surface finish I had to print each part (6) separately, I tried to print the whole enclosure in one block but only with poor results. I regret that but hey it’s only FDM printing, it comes with its defaults I guess and I’m playing with these limitations to get the result I want, most of the time I don’t go much higher than 1cm on the Z axis or my printer tends to get less accurate.

The visible part of each of the panels of this enclosure is “the first layer side”, I mean the side that sticks on the PEI sheet. That’s why it seems so mat and smooth. The lines are not visible, because of the material and also because I fine-tuned my first layer 0.15mm, 30mm/s, nozzle 190°, heatbed almost off - 30°, (that’s only for this filament).
Speaking of filament, that’s the NX2 Matt PLA made by Extrudr (Austria company); I know that it has its specific formula but now I’m incapable to give you the exact difference between this and a generic PLA. All I know is that it’s suepr cheap (25€ for 1.1kg) and is the best PLA I’ve printed with

and Extrudr gives the RAL color reference of the product, and apart from Colorfabb that’s rare and should be mentioned more often. Also, yes with a Mat pla you’ll probably see less lines and artefacts. This PLA is not easily sanded and has in theory a max speed of 60mm/s

I LOVE this design. While I love the Shield, I find the location of the keys and encoders un-aesthetic and I’m drawn more to your design and the Fates. So cool!

Thank you for your perspective!!
Definitely gonna try out this PLA!
and yes I also haven’t made good experience with printing whole cases…thanks for the tip to print it in parts.
I always try to use the first layer for the parts which should look good but still the layers are visible. Especially as the printer starts to print diagonal after it made the „borders“…

@Nordseele very nice design— the quality of the printing is astonishing, at first glance i thought it was powder-coated aluminum (like the aleph). i actually like the keys— how do they feel?

@danbond before your enthusiasm gets away from you with a miscalculated critique, the key/knob placement of norns was an extremely long design process and highly intentional, and i might say, absolutely aesthetic in additional to functional. with a minimal three key/encoder combinations, one was meant to be system/meta controls, hence separated for interface clarity. the remaining two keys were placed side by side because your fingers, when hand is in front, are side by side, hence a natural fit. the side-by-side also indicates forward/back very commonly in the system. negative space was an intentional tradeoff for thin-ness, given the 1/4" jacks set the height.

the shield design, on the other hand, is about economy of space, materials, and cost. the general pattern of separation and use was preserved while working within the size limitations of using a consumer grade pi. i believe the lower case design by @JHC is simply perfect: minimal, economical, and feels very professional. it was an artful execution to accommodate the top plate and component placement of my design.

for general interest, i do have a redesigned case with different placement (which still respects the design patterns stated above) which i’m holding back until i figure out the proper materials.

Thanks @tehn !
The switches are from Marquardt, the 6450 series. It’s subjective but they feel great, not too noisy (it’s not an annoying « Click » like the MEC switches, more an old keyboard sound, imo it’s important for an audio device ^^), relatively low actuation force. And they come in at least 5 different colors and it’s easy to change the cap without desoldering . They’re found on every Clavia/Nord keyboards devices. if you wanna try the ref is here

@tehn Apologies, i didn’t mean to criticise the work you’ve put in designing the Norns. Obviously, I’m a huge fan and highly invested in it for my musical endeavours. I’m aware the shield is a balance of cost and function. I just generally like a bit more space and rectangular format. That’s just a preference thing. I’ll likely be upgrading to the full Norns when i can partly foe the aesthetics and partly for the 1/4 jacks.

apologies, i didn’t mean for that to come across as a diatribe— it was an opportunity to explain some decisions which have elsewhere been met with skepticism, and since releasing the the shield as open-source i’ve sometimes been experiencing an off-putting lack of respect for what was basically a gift to the community. (this is a wider issue with open-source culture and a different conversation— i’ve been guilty of this in the past where in another thread years ago i loudly complained how linux users must be insane for not fixing the trackpad dynamics… whereupon i had to humble myself quickly). just to say, this wasn’t just about your comment. everything is cool!

@Nordseele aha the clavia/nord connection, i thought i recognized those

Those Nord buttons do feel great from my experience with the Nord Drum 2. 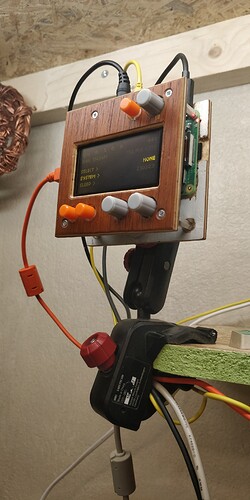