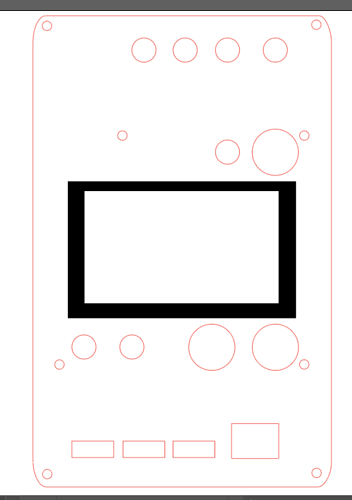 Hi, I just ordered the Norns shield kit and a pi3 and I’m thinking about adding the system to my eurorack. I couldn’t find anything about that here. So I was wondering if someone tried this already. Id love to build something like this out of a plastic front and route the USB and mini jacks to the front. Not sure if that works but it would help a lot. Any ideas or suggestions are welcome

I added some Illustrator sketch that kinda shows what I mean. (It based on an Idea I found in the forum earlier. I’ll link the person who inspired this design to this text later, when I find him again. ) Thanks a lot

I’d be interested to see what options people come up with for routing the usb connections and audio inputs to the front panel. My guess if you’d want some sort of attenuation before the input of the norns also so you don’t fry the audio in on the norths shield.

Good thought. As I´m a total Newbie I didn’t think of USB, and attenuation. Maybe I’ll end up using it as standalone.

- Thanks a lot. I just wanted to think loud here. Here is a little design update. norns_shield_eurorack_housing.ai (53.3 KB)

Also wouldn’t mind to take it out of the rack for usb use (Im doing that with pico drums anyway) and just have the audio and ad a small eurorack attenuator or the ones from Koma https://koma-elektronik.com/?product=koma-attenuator-cable

One other thought — since the Pi3 requires ~2.5A of 5V power you’d also want to consider an external power supply. All of this is certainly doable though, you could even get some USB-A -> B extenders and mount them to a panel.

I actually have this in my rack which come in handy

that emits 1.5A of 5V in a best case scenario. A Pi 3 wants a good 2A+ of power; the official 2.5A power adapters are a good bet. I would not go near trying to run this off your Eurorack’s power supply.

Beyond that, it’s a meaty project. The Pi’s own USB and similar connectors are located on the left edge of the Norns shield. You’re not removing them, so you’ll need space on the left to run extensions. Have a look at the various photographs of the shield mounted on a Pi in the main thread. Where will your “extensions” go?

Audio jacks are more doable: they are on the top edge. You could, and I would absolutely not advise this, desolder them and wire up your own harnesses. Then you just have the problem of amplifying and attenuating output and input respectively. The latter is straightforward; the former is not always easy dependent on volume.

Norns is designed as an external, desktop unit, and it works really nicely as that. You’ve perhaps made the mistake of seeing something electronic that is shorter than 3U, and deciding it needs mounting in your rack. This is not always the case.

I’ve been thinking a little about this, too, and have to agree with @infovore- just making a panel to hold the unit in a Eurorack case might not be as great an idea as it may initially seem.

An alternative might be just to connect it to a decent USB MIDI to CV/Gate interface, and/or a dedicated Eurorack USB audio interface.

Expert Sleepers make good candidates for both roles in their ES-8 and FH-2 modules. I have both, and can vouch for their quality (apart from the slightly loose jack sockets).

I’m assuming that Norns is able to access external USB MIDI and audio IO devices (I’m a Norns noob, so haven’t tried either, yet).

Or an Ansible, of course, assuming you want to keep it Monome all the way…

I actually have this in my rack which come in handy

Forget this, it will bug probably a lot … Knowing that a 3.1A supply is preferred

Oh wow thank you for all the good thoughts. Thank @zzsnzmn@toneburst and @infovore for the heads up and good tips. I don’t have any other Monome gear (referring to Ansible) and would love to have everything in my/one rack. Even if I glue it (joke) onto a panel in my rack.

I think the Expert Sleepers Idea is really good actually.

A lot of cases use a Meanwell RT65b as the psu. Whatever else its failings, it supplies 5A on the 5V rail… so not totally impractical to use a raspberry pi in a eurorack case… you’d reall want to add cv on the front panel though…, it may be worth incorporating something like cv.ocd which is open source or yarns or cvpal - there are a few other open source/arduino/teensy based midi to cv options that could be added… or you could take eg some fragments from the terminal tedium and add that…

maybe using a Terminal Tedium running norns software would be a better way to integrate a norns-machine in a eurorack case ?
(thought it doesn’t remove the need for an external power supply and would probably need some software bridging to get CV ins communicating with norns)
(re.edit: since @forestcaver had the same idea, it probably means it’s not totally off ^^)

Oh ok cv pal seams like a great cost efficient I actually have this with a usb to midi converter. Maybe I could get rid od this then https://www.modulargrid.net/e/hexinverter-Electronique-mutant-brain-silver

I have a https://www.modulargrid.net/e/qu-bit-electronix-nebulae-v2-silver and also started playing around with the internal instrument. Gone have to check what the Tedium sounds like. Thank you.

maybe using a Terminal Tedium running norns software would be a better way to integrate a norns-machine in a eurorack case ?

The lack of a screen makes it a no-no for me. I actually bought a TT board ages ago, but haven’t got round to assembling the module because I’ve come to the conclusion that I dislike the idea of a multi-purpose module like that that gives you no feedback on what the controls do, or even what patch the thing is running.

lack of a screen

ah! i forgot this “little detail”.
(personally it’s not the lack of screen that prevented me from assembling the TT board in my drawer, but the idea of having to sysadmin yet-another-computer).

my practical brain goes towards modules that have multifunction but have learned recently that if most of your modules are like that, then you are constantly menu diving. For what ever reason, all the options make it hard for me to concentrate on what the patch is doing. probably my animal reptilian brain but still.

I’ve wondered why norns doesn’t have a eurorack version for awhile. at first i thought that was was teletype was. i’m not into the live coding thing.

I’ve wondered why norns doesn’t have a eurorack version for awhile.

I imagine the power issue is the biggest reason. Eurorack was designed for low-power analogue devices, originally. Of course, many modules are now run on relatively low-power MCU chips, but shoe-horning a Linux PC into your Euro rack might be pushing things a little far.

but isn’t the nebulae basically a PI? thats at least what i heard from someone