Thanks! Exactly what I needed!

hi i’m testing this library and just tried demo.lua
i expected the screen to update values from touching shnth but nothing happens

just confirmed with fish gwonzer that my shnth works so i’m confused
any tips?

Small update/note on the shnth lib - if anyone’s having trouble ^ we found that sometimes connecting HID devices can be a bit fiddly. Just try to replug it and ensure SHNTH is showing up at HID slot #1 and you should be good to go.

Sweet! I’ll check this out when I get home.

Added a shnth program loader to this repo

Consider it beta quality** at best!

Start by updating in Maiden, then create the following directory on Norns:

Put your .txt patches in this folder then run SHNTH/LOADER from the Norns SELECT menu.

** I had to recompile shlisp for ARM Linux with a few modifications, so it might be a bit fiddly. Give Norns a restart with shnth plugged in if you’re having issues, mine didn’t work at first until I did that. I’ve been having a lot of issues with shnth on Big Sur, which is why I made this.

THIS CANT BE REAL

not fish but raw shlisp text in maiden and served to shnth via norns??

Yes, you can edit shlisp code (non-visual Fish) files in Maiden or vim/emacs/nano with SSH and deploy it to your shnth with this script.

I didn’t have to do much TBH

shlisp was already ported to Linux by PB, I just recompiled it on my Norns (binary is included in the repo) and slapped together a quick GUI for it.

yikes! I can’t wait to try this when I’ve got my norns in front of me
thank you for sharing!

Ok, so I realized this maybe exists better as a mod, that way you can change shlisp patches while accompanying or processing the shnth with another Norns script running. Just removed the loader script and moved it to lib/mod.lua instead.

Enable the mod as you would any other, then after restting your Norns you can K3 into the shnth mod and deploy patches by scrolling + using K3. Tap K2 to back out of the mod menu.

Apologies for the whiplash!

Hi all - just pushed another update to the shnth repo! Update via Maiden.

I’ve ported @Rodrigo’s Samplazzi Max patch to Norns. Check the SHNTH/SAMPLAZZI script and read the docs before launching for controls. It should be the same as the original Max patch.

(TL;DR: choose four samples from params and control them [wildly] with the shnth).

edit: I’m a terrible human. I thought I had documented within the script more lol. controls:

I’ve also recompiled the shlisp binary with the latest from Peter’s Github repo. I believe (?) this adds support for tank and boats (classical Lisp functions), but perhaps it was always there and I never noticed.

I wish I could like this more than once!! Hell yes.

Oh my - will be checking this out for sure

holy fracken…i don’t know even where to begin…

could you add the install shortcut in your big description for any new norn(s)hnth users?

can’t wait to see other scripts develop with this!!!

Here’s a first try - such an awesome script. Thankyou 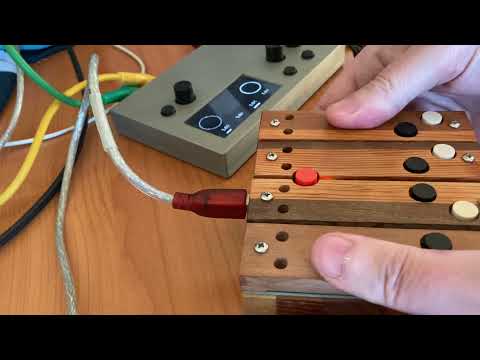 my first session with samplazzi

Some great videos that give me ideas.
I can’t help thinking that the shnth would work great as a controller for many of the existing granular playback scripts - the arc ones particularly, instead of the arc. The wind input would be interesting…