hope to see some of you there!

greyfade is a new-york based record label, founded by joseph branciforte in 2019, focusing on the role of computation in music composition, performance, and improvisation. for its label launch, greyfade partners with fridman gallery and CT::SWaM to present an evening of spatial sound works, where the distribution and localization of sounds is a primary compositional parameter and a central feature for the listener.

the evening begins with an 8-channel installation from vermont-based sound artist greg davis, premiering a new work in his primes series, which exploits the otherworldly harmonic properties of prime number sequences using sinewave oscillators. composer and electronic musician kenneth kirschner premieres a fixed composition for multichannel “digital choir,” with his trademark explorations of pattern, harmony, and long-form development expanded to the spatial domain.

the evening concludes with a live improvised performance from grammy-nominated vocalist theo bleckmann and electronic musician & producer joseph branciforte, with live spatialization by sound engineer daniel neumann. bleckmann and branciforte will be celebrating their debut release, and the inaugural release on greyfade, LP1, due out the same day in vinyl and high-resolution digital editions.

the new yorker wrote some nice words about the performance this morning.

hope to see some lines folks over at fridman gallery next week! 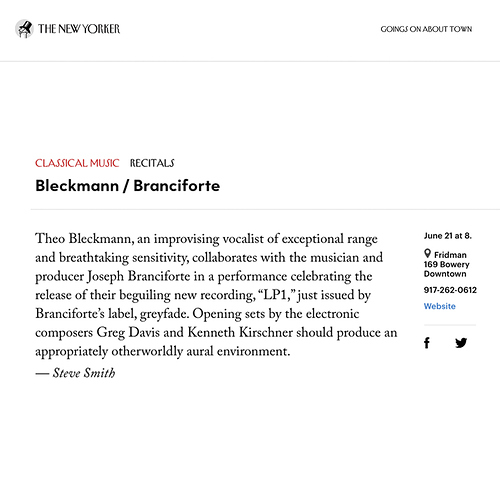 I’ve got to play a show in Tasmania (of all places) that day, else I’d love to be there. Best of luck!

thanks @pleurodesis… sounds like you have a quite a gig of your own!

we ended up arranging the speakers into a double quad array in the main gallery space, should be fairly interesting from a spatial perspective.