especially in a smaller set up. octatrack + modular would be probably my most preferred ‘minimal’ set up.

agreed on the idea of ‘abusing’ the audio track sync, this will also allow you to have multiple triggers on one step, and then you could use slices to select the number of repeats, or vary them in some other way.

still, a MIDI to CV module would allow you to use plocks on CVs. i’ve been looking at Endorphine Shuttle Control: http://www.endorphin.es/assets/endorphin.es_shuttle_control_manual_2.0.1.pdf

16 freely assignable outputs but the price is a bit too steep, and the host capability only supports one device at a time (even though there are 2 inputs, one simply provides usb power), so you can’t have both octatrack and a midi controller connected at the same time. is there a way to make octatrack merge the incoming MIDI with the output from MIDI machines?

I frequently ran out of tracks on my OT, so I’m obviously pretty keen on preserving track count.

but for what [the OT] does, i don’t think there is another hardware device that could replace it.

Couldn’t agree more. I love mine.

it is a pretty deep machine with some deeply flawed implementation of certain features.

As it seems that some folks are considering buying one, it might be helpful to list its shortcomings as well. Here are the ones bugging me most:

is there a way to make octatrack merge the incoming MIDI with the output from MIDI machines?

Thanks @marcus_fischer for starting this thread. The OT is simply amazing! I’ve had mine for over a year now and I’m constantly coming up with new ways to use it.

One of my favorite things is to use the midi sequencer via expert sleepers to sequence and mangle CV in the modular. The possibilities seem endless (I’m easily baffled by the concept of infinity so take that with a grain of salt). One of my least favorite things is not being able to use Pitch while recording with a PU machine that and as wolfgangschaltung mentions [quote=“wolfgangschaltung, post:22, topic:1970”]
You can’t overdub in the Loopers (Pickup Machines in OT speak) if the OT is sync’d via MIDI In.
[/quote]
are perplexing and caused me mental exhaustion until I figured out why “overdub aborted” was happening.

I believe the OT is one of the most important machines I own. I’m rarely inspired or intrigued by something I can easily master. The steep learning curve was actually a selling point for me. I’ve had many a late night cursing the manual only to realize (sometimes weeks or months later) the sheer brilliance of Elektron’s decisions. Every bit of this machine is carefully thought through. If you are new to Electron machines, Welcome! Like the ocean, the OT is very deep and there’s far more going on beneath the surface than meets the eye.

Yeah! When I figured out that I could not change the pickup machine’s pitch and overdub I was pretty bummed out.

I feel like pickup machines in particular need some fixing in the next Octatrack OS… But who knows if/when that will ever happen.

for now i am just finding a lot of workarounds to get it to do the things I would like to do.

Here’s is a mindmap made by Mark Mosher showing the OT’s various trigger types, what they do and how they are used.

I found that mindmap hard to print, so I compiled this overview, perhaps you find it useful. Haven’t revised it since June, please let me know any mistakes: 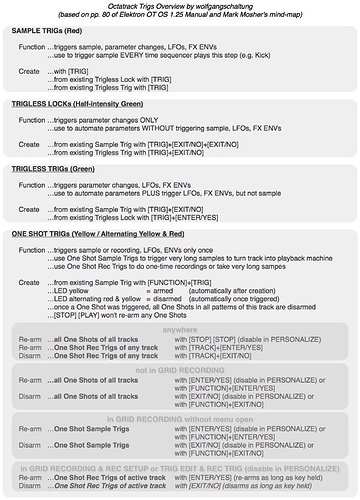 Had mine for six months and still learning. So many possibilities. I’m struggling just to set it up and read my blofeld in multi mode despite following tutorials. The mind meister pages are great place to start if anyone is thinking of getting one. I generally always have to midi clocked to my MPC and also sending clock to max for my grid. Wanting to get deeper into the machine and really understand the possibilities. For now, content just to follow basic tips and continue to jam and learn.

I have extreme difficulty deciding which elektron box to start with. I sort of wish I had all of them. This thread definitely adds weight to the octatrack option.

If I had to pick one, I definitely feel the Octatrack is the most inventive and unique of their offerings. I picked up an Analog Four for a reasonable price from a friend a few months ago. I was hesitant after mixed reviews of the sound and I must say I don’t hear it at all, and it’s got a lot of potential with a lot of power in minute tweeks of many of the parameter controls. It takes a bit of time, but it is a blast. BUT, the OT is their most unique and open ended box. I love it, but if you don’t want to work with samples or sampling then it will obviously not be as appealing.

I’ve been preparing for a set with my buddy Tim Barnes where I’m sampling his percussion and using it as an effects hub and field recording mangler. I rarely use it for detailed sequencing as I just get annoyed with that detailed level of programming. It does a great job doing a lot of different things as I’ve also opened for Rafael Toral using it with single cycle samples as a Hecker-ish (Florian, not Tim) sort of box of nightmares ha. Otherwise, live sampling and clocking my modular is also a great format I tinker with.

Does anyone here feels like Octa FXs are pretty lame? I love this box but, man… i only see myself using the Filter, maybe some EQ, and Dark Reverb, others are very thin and almost not interesting, Phaser being the worst of them. Is it just me?

I actually kind of enjoy the phaser. It’s a very specific sound but I don’t think it’s bad. Some are good, some are bad.

i felt that way at first too but upon closer inspection i’ve found some have really great characteristics.
have you checked out the distortion setting on the EQ? or abusing the gate setting on the plate reverb? i’ve found you can get some nice tape saturation sounds out of the compressor too. i think that the octatrack effects are designed to be very general with broad sweeps over the controls but they all have pretty good sweet spots… you just need to put in the time and find them. i actually wish that there was some way to save effect presets because i often find myself dialing up the same settings frequently… i’ll just add it to that big landfill that is my octatrack feature wishlist

sorry for the lame promo but i have one for sale on the for trade subforum.

I totally agree. I was a little disappointed in the beginning that the FX seemed half backed in an otherwise amazing instrument. Until… I dove into each one! P-locks take them from average sounding to amazing! I too have a long list of improvements to the OT I’d like to see. That said, does anyone hear have a guess if we will see an OT MK2? And if so, What are your top wish list items?

The Nord Drum 2 is sequenced with the Octatrack’s MIDI sequencer tracks 1-6, and track 7 to the global channel for switching kits via program changes. It’s connected to inputs A & B. The Eurorack system also has one track of MIDI coming from track 8 of the MIDI sequencer to an Intellijel µMIDI. The µMIDI sequences a Shapeshifter and also sends clock to a Metropolis which sequences an Atlantis. The patch itself is kind of complicated with a Planar sending different mixes of the Shapeshifter and Atlantis to a Rainmaker. The outputs of the modular are sent to inputs C & D on the Octatrack.

Track 1 is the Thru Machine for the ND2. Track 2 is a Neighbour, allowing me to use 4 effects. They are Lo-Fi -> Delay -> DJ EQ -> Plate Reverb. A nice feature to use with the delay is to filter out low frequencies with the Base parameter, and then the delay only applies to stuff in the upper range of frequencies. The DJ EQ is great for cutting out frequencies from the drums for fills / transitions etc.

Tracks 3 & 4 are dedicated to playing some field recording loops.

Track 5 is the Thru Machine for the Eurorack, Track 6 is a Neighbour. This one is Compressor -> Delay -> DJ EQ -> Dark Reverb. Since my Eurorack already has a delay, the one on track 5 is configured in repeater mode, I can use this to lock the sound coming from the modular while I tweak stuff there and then unlock it when it’s ready to bring in to the mix. I can listen to the sound on inputs C&D via headphones while the buffer is frozen.

Track 7 is set up to sample the Eurorack inputs in to a pre-sliced buffer. The slices can then be rearranged and parameter locked live in the track.

Track 8 is a master track with a compressor and another freeze delay… not sure if I will make full use of that or not yet.

For the show all I need to do is connect the two Octatrack outputs to the PA.

not sure if you all follow the electron forums… but someone just discovered the most brilliant ‘bug’… (might be useful for @marcus_fischer )
-set up a track as a flex machine, map the crossfader to the rate control

Just got an Octatrack yay! Is there a way on the Octatrack to simulate mlrv mangling style as in triggering the start points of a loop without interrupting the playing of the loop while keeping it in sync?

not exactly no… midi triggering of slices is not possible sadly (well, not without some weird half baked work-arounds… see the electronauts forums for lots of discussion)
What you can do though is set the keys to play slices… then turn slices on and loop on, set the play length to max, and you get ‘something’ in the right direction… assigning the cross fader to start position is fun too.
Just to warn you… a lot of detailed manual reading is required with the OT, you’re probably going to have a few moments of wanting to smash it up at the beginning… took me quite a while before i became really comfortable with it.

Thanks dspk, yes I plan to RTFM before I even turn the OT on! That’s a shame for the midi triggering, sounded like it could have been right up the OT’s alley. looking forward to learn that machine .

How do you guys integrate it with a monome setup?