But that’s probably too big a difference. Dang.

has anyone built one of these?

my setup still doesn’t really require offloading the power draw, but i tested this again today and it works well.

@billyhologram so i’m back on investigating a 2hp panel-mount version of this. it’s harder than it should be! but mainly because of the mounting.

i can get the mini and A USB ports more nicely thin by using this part, which is mid-mount:

and then using the same mini’s as above. but then i hit a wall at proper right-angle mounts.

so, perhaps i’ll just draw up a new version with this “slimmer” USB A port, create a panel enclosure, and call it done

Hrm, maybe something like these right-angle standoffs could work. Not sure where the mounting screws would end up relative to the USB ports, though. Might not look so great if they were off-center? (That’s something I don’t like about right-angle components.)

I’ve been meaning to build one of these (the power supply in my Make Noise skiff definitely doesn’t like the grid very much), and maybe make a little enclosure for it as well, but haven’t had any time lately.

I’ve just ordered 3 boards to the UK. Will order parts shortly. Is anyone in UK/EU interested in one of these - if so, I can order all the parts (2xUSB A, 3xUSB mini-B) and we can save a bit on postage costs. Total should be about £12 for board and components. Get in touch if interested!

With @scanner_darkly’s Teletype + Grid beta (Grid ops / integration), it seems like this is now something worth building. Has anyone made a 3D-printable case?

i have a batch of these on order:

i just created a new version of the offworld which is much smaller, for a single device. [IMG_3920][IMG_3919] i’m making a matching plexi “sandwich” to cover the bottom and top so it’s more mechanically robust and without exposed contacts for shorting. i’ll get the files posted soon, but i’m finally going to offer these as a DIY kit (all parts included) and prebuilt. i’m sorry it’s taken so long-- i finally found a really nice USB-A that’s mid-mount so the whole thing is slim and finally ele…

which includes a plexi top/bottom sandwich. they should be robust.

but a 3d printed thing for the DIY circuit would be great!

I was thinking about this last night after reading through the monome ecosystem thread.

I’m wondering if it’d be possible to make a, say, 3 in -> 3 out (or whatever I/O count makes sense) USB power/switch that is addressable by i2c.

My thoughts are that It’d be very cool if you could trigger a change of grid connection from say, a Teletype to an Ansible with a trigger to Teletype. I think this could possibly be an interesting way of controlling your ecosystem in a very Monome way.

The cool thing about the Monome interface controllers are that they are completely “static”, in the sense that there’s not mechanical on/off switches (grid buttons don’t “depress”), or potentiometers that have mechanically-defined position (arc has endless encoders). Which lends itself to seamless switch between different “apps” running on different modules requiring the various interfaces (none of the “you have to move the knob to where it was to make it start changing things” UX weirdness)

In practice, I’m thinking it’d be cool if you could control LFOs with cycles, then cause a trigger to switch the arc to controlling some other thing (maybe some future arc + teletype turtle app :)?), then trigger again to switch back to cycles once you’ve done whatever you need to do with the other app.

I have 2 spare Offworld-2 boards (as per the first post of this thread) in the UK. If anyone in UK/EU wants one I can post it if they send me a few quid on paypal.

Put together one of these and works like a charm despite my dodgy soldering. 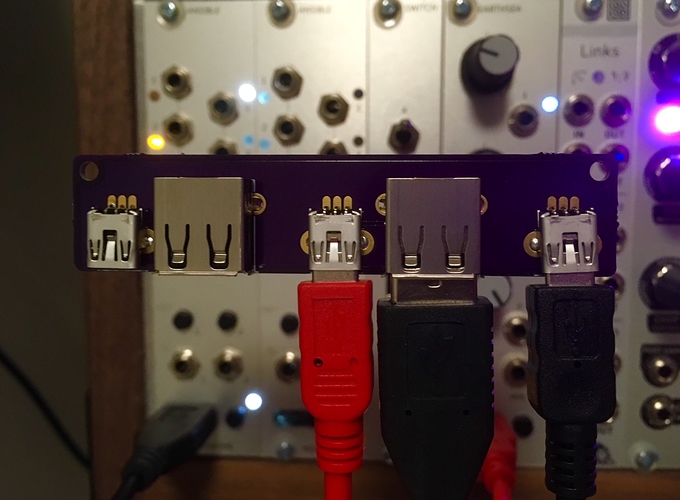 Awesome, I would definitely be interested in a case!

Apologies for the silly question, but would this allow me to use my grid with tt? I’m not up to date on the power side of things in relation to grid/tt integration.

Yes. Works great for me. Other options are the offworld 1, Switch or ext 5v.

Thanks! You don’t still happen to have a couple of those boards hanging around, by any chance?

offworld-1 is a simple USB power utility that allows a device to be powered by an external source. this is useful if your modular cannot provide enough power to a grid, for example, or if you're having noise problems. offworld-1 is open source, you...

…and - if you DIY an offworld-1 and have a 3d-printer, here is a post about a little open source case that i made for it:

Just put together a little 3D printed case for the Offworld-1. It is intentionally a tight fit, but it worked for all three of my OSH Park builds (100% BOM Parts). [IMG_3746] [IMG_3745] [IMG_3744] Find all of the the open-source files up on GitHub (STL and OpenSCAD): https://github.com/bpcmusic/offworldcase

The one in the monome store comes with a nice laser cut cover, which is also available open source in @tehn’s repository:

usb power splitter. Contribute to monome/offworld-1 development by creating an account on GitHub.

I’ve been using mine with my grid and teletype running @scanner_darkly’s beta grid firmware. It is absolutely fantastic!

Brand new to the Monome world and have just acquired a Meadowphysics with my Grid and I’m getting buzz although my case seems to have enough power.

That said, ideally I’d like to pick up an Offworld-1, Switch, ext5v.

I see two routes here potentially and am hoping I can get some help:

1.) Someone here has some/one available to sell or is open to building one etc - where I can send PCB boards to. (happy to pay).

2.) I somehow learn to build this. I have no experience at all but in general it looks simple - any suggestions on where I can figure this out?

I’m based in Brooklyn, if that helps in any way. Perhaps someone is local that I can use to help build this.

Apologies for the total newbie question etc but hoping I can find a way to get a proper external power here.

Here’s an option: I recently got a Grid and hacked the included cable in half and spliced in another USB A end to make a Y cable. One USB A end only has power lines running to the Mini USB end, the other USB A end has only the data lines running to the Mini USB. Shields all connected. Then I connected the power end to a USB charger brick. Took about 30 minutes but only because I was precious with the heat shrink and soldering. Parts were scrap I had on hand. The Offworld board looks great but there’s no need for such a thing when scrap USB cables are literally bursting from my drawers. Give it a shot!