let’s hype old things! things held with duct tape. things that still work or don’t, or maybe they found a new purpose. things that you found abandoned on a roadside or that were gifted to you or passed to you by previous generations. your first synth. the cast iron pan your roommate left behind.

it doesn’t have to be music related things. and we can talk about the life of things too. what strange journeys some of them take. what will happen to them once we’re gone…

Shout out to Sound Recorder in Windows XP. I didn’t know it at the time, but it was my first looper/sampler. I’d open up as many instances of it as i could and try to trigger as many samples as I could with my mouse. Good times

awesome, thank you for posting about software - it doesn’t have to be a physical old thing!

it does amuse me that windows notepad hasn’t changed much (or at all). i don’t use it for any meaningful editing but still use it for my todo list.

i want to hype my trusty old mackie 402

after seeing alot of synth/noise performers and inprovisers use the 802, including @marcus_fischer, i tried unsuccessfully to find one used within my budget

the smaller version was available nearby and i pounced

it’s nice having a larger mixer now too but i still use this all the time and while patching my digital synths it adds something special (at this point it’s actually easier to list the albums I HAVEN’T used it on! whether i mention it or not, it’s been an essential part of my signal path adding texture, static and a simple trustworthy EQ to the mix)

i know the controls like the back of my hand

I’ve always looked at that one thinking it would be nice for touring (I try to get things tiny for that) but for me the flexibility of the 802 routing it hard to beat at its size/cost.

20 years ago we went to a party at a house where some grad student composers were living. One was moving out, I think he had gotten some kind of big prize… Rome Prize? Some German thingy? I dunno, but it was big enough that he was moving out and getting rid of many of his possessions.

One of these was a potato masher. At first glance, it is not remarkable. It has a molded plastic handle, and chromed bent 1/8" thick metal that, we believe, was intended to the part that does the “mashing.” Despite being a manual masher, there was no manual with the masher. This must have been before potato mashers were bluetooth connected.

Well 20 years later, we still have that potato masher, that “composer” has become quite famous we hear, and we’d like to believe that his success is due in large part to the inordinate number of potatoes we’ve mashed with his former potato masher. We’ve mashed potatoes in 3 countries with it, we’ve mashed yellow and white and red and blue potatoes with it (always cooked before hand, it doesn’t work so well if you mash a raw potato). We’ve even gratuitously mashed potatoes when there was no demonstrable need.

I bought a copy of Xfer serum with a gracious student discount from Steve when I was in college. I have used it in many projects in some form or another and know it like the back of my hand. Lots of follow ons in the wavetable space but I really do appreciate the amazing UI of the synth and lots of modulation capabilities as my experimental synthesis goals have grown.

I have been using the same Panasonic radio alarm for my entire life. The volume knob is more like a low-high switch and it doesn’t receive radio signals very well, but it tells the time and goes off whenever you set it to. If it dies, I probably will too. 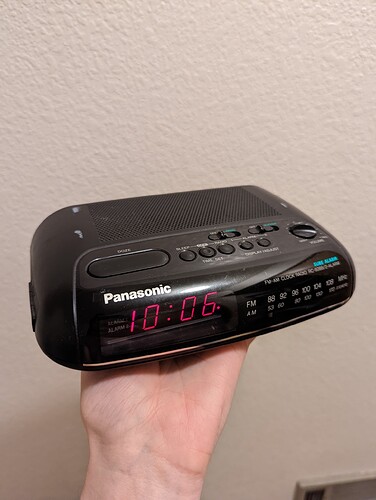 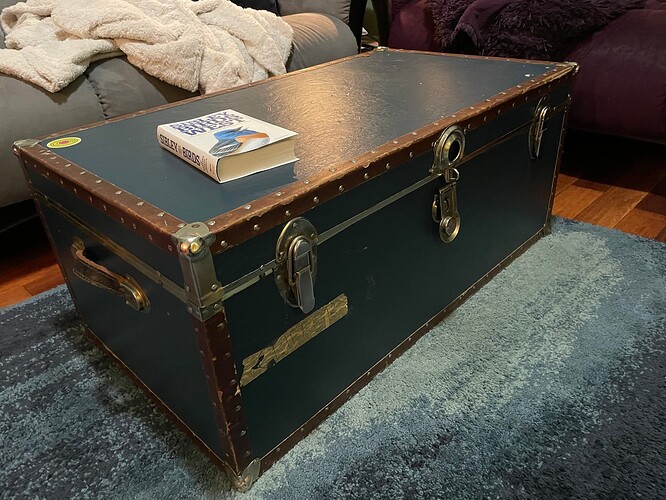 When I was around 10 I went to sleepaway summer camp and my parents got me this trunk based on the camp’s recommendations of what would fit under the bunks in the cabins. When it was time to go to college, I packed some of my stuff in it, and it hung out in the trunk room in my dorm. It stayed in basements for a few years after that too, just kinda low key holding whatever stuff I wasn’t using at the time.

When I got married and moved to California, we didn’t have much furniture, and this trunk was about the right size, so we jokingly put it in a coffee table place. Twelve years later it remains an excellent coffee table, and I wouldn’t want anything else.

I think it is made of mdf. I’m surprised it’s survived as long as it has, what with a four year old jumping on it and everything. I dread the day it kicks the bucket; I wouldn’t know where to get another.

One trick I think should work, if you’re willing to go mono, is to use one of the main busses for FX sends (e.g. Main L), and the other for your master mix out (Main R in that example).

Put channels 1 and 2 into mono mode so they come out both L and R outs. Use the left input of channel 3-4, so the normaling brings it to both outs, as well.

Take your FX send from one of the Tape Outs, through your outboard hardware, and back in on the opposite Tape In (e.g. FX send from Tape Out L → outboard → FX return on Tape In R). Take your final mix from the same side of the main out (Main R in the example above).

Obviously there are some compromises… each channel’s send levels are tied to the direct levels since each channel uses a single volume knob to both sides of the stereo bus. And the main volume may be best used as a set and forget, since it will be amplifying/attenuating both outputs. But with careful tweaking of the FX input stage, you can get some use from it.

(At least something like this should be doable…worked this out in my head, and haven’t had a chance to test it.)

I also have a very old radio alarm. The minutes cant be changed anymore due to some wierd glitch or something. It has a offset of 42 minutes later. We actually love the minute offset it makes you feel that you need to get up later in the morning. Highly recommended.

Just looking at that makes me feel like I’m late for the bus and forgot to do my homework.

Not sure which old object to pick. I have lots. At the moment I’m working on a track on my Powerbook G3. I have some sample CD samples, a few mangling apps, Reaktor, Pluggo, and put everything together in Ableton Live 4. It’s slow (most often I only have an hour or so before bed) but I like it. I’m trying to force myself to actually finish the composition, if not the production. As far as music goes, I’m not done with what was possible with software in 2002. I like my Norns and my small eurorack (and my E-mus and my Microwave XT and my no-input setup and my bass and my darbuka and drum sticks and pile of scrap metal and and and), but I don’t think I ever will feel like I’m over OS 9 and the esoteric software on that platform.

Another thing I could bring up is my hand-crank egg beater, which I use as much as possible over my electric mixer. Not every problem requires a high tech solution. I also love my manual screw driver.

(Also, @juhbuba, you’re a genius, five stars. If the mixer has pan controls you should be able to have some sort of blend too?)

So it doesn’t need to be held by duct tape and it is still being sold but I can’t hype Reaktor enough.

It has everything - from synths to FX, to samplers, drone machines etc.
What I probably love the most is the user library and the fact that ensambles created 20 years ago still seem to work and they still sound awesome. So it is both a wonderful time machine and great instrument. I am fairly sure I could recreate any sound my eurorack can make in Reaktor but the other way around not so much.

Non music related thing that I use almost every day is a military belt very similar to this one: 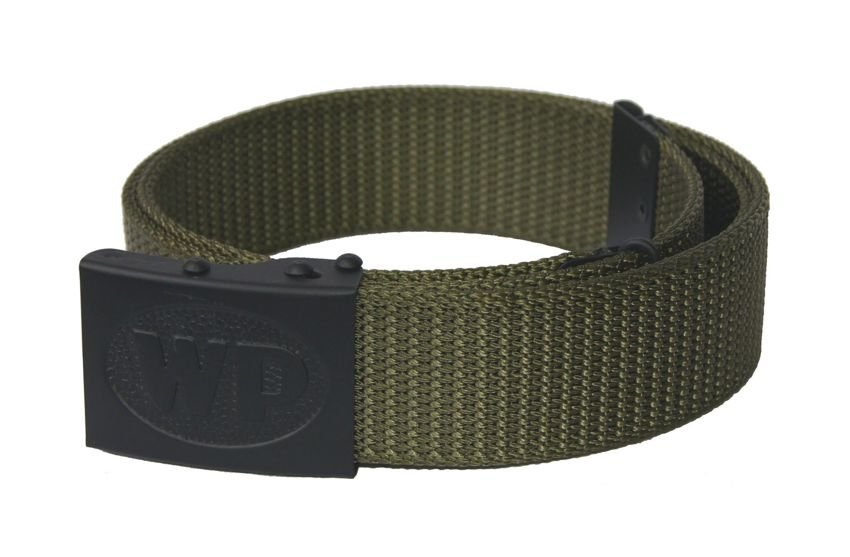 Despite me being in general not cool with idea of an army I must admit the army clothes can last a very long time (I still have and use an army jacket my dad got in the 70s).

I wouldn’t know where to get another

We have one that’s almost identical to this. Ours is made by a company called Mossman

My basic spec iMac is nearly 12 years old now, I’ve had it since new and it’s still my only computer. I always have to search out past versions of software as the newest OS it runs 10.13.6.
I absolutely dread the day it stops working because I can’t imagine replacing it with something that will last me until 2034, and my relationship to Apple is not what it was in
2010.
Also own many many vintage woodworking tools, and using a tool at least twice your age that you know will outlast you with a bit of care is so nice. 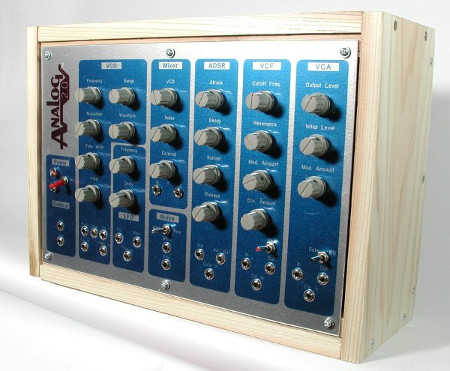 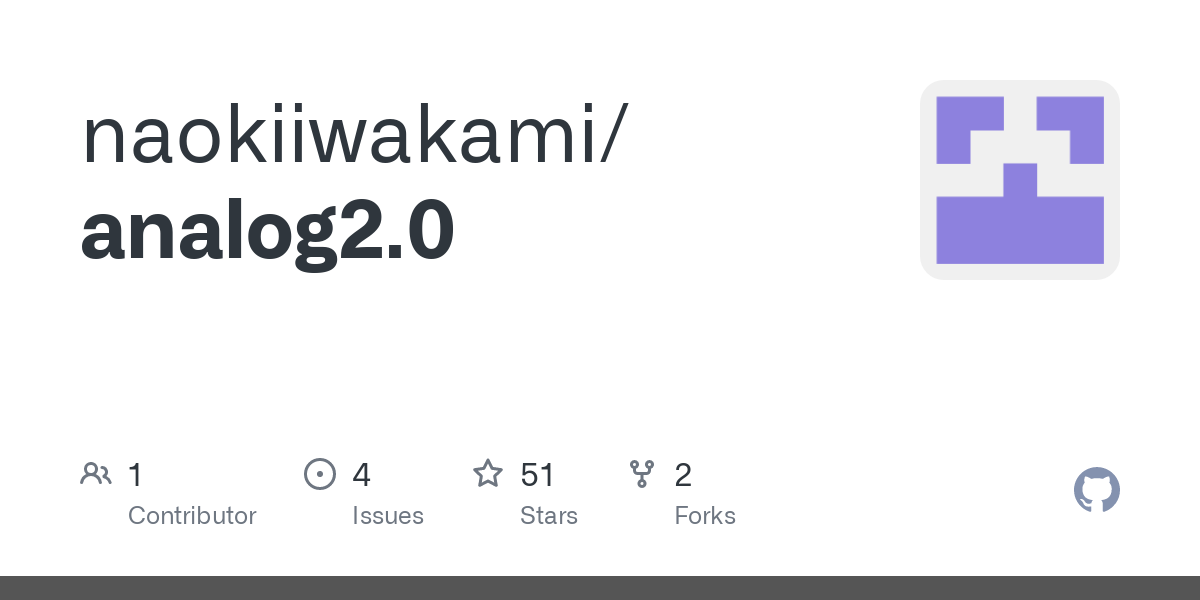 Contribute to naokiiwakami/analog2.0 development by creating an account on GitHub.

Discovered by way of HAGIWO, a DIY synth enthusiast from Japan who has been making some very interesting posts to their new Patreon feed. https://www.patreon.com/hagiwo/posts

HAGIWO describes Analog 2.0 as " The most famous modular synth DIY project in Japan"

A year or two ago, I made the mistake of getting rid of my 8 year old Macbook Pro which I bought new, which was 1) my only computer 2) working perfectly 3) wonderful to use 4) something I had gotten completely used to.

Now I’m typing this on a much newer (used) Lenovo and while I don’t feel that good about getting a new (used) Apple anymore, it still bugs me that even though this does the job as intended, a MBP that still costs about 1/4 of this one used, and is 2-3 times older, would most probably still serve me much better until it gives up the ghost.

(Ditto with the other part btw.: whatever utilitarian non-flashy leftover tools my father has given me, now after he’s retired and doesn’t need all his woodworking tools anymore, are an order of magnitude nicer than the new ones I’ve had, and do feel like they will outlive me.)

In do really wish there was a computer manufacturer now that made machines with the focus on
• just working
• doing that for 10+ years.

We had the technology to do that in 2010, how have we somehow lost that ability since then?!
(Spoiler: capitalism, ever increasing software bloat and software-created, culturally adopted technical demands requiring machines to prioritise specs over lifespan is how)

“desktops” are definitely still an option there! They’re not as futureproof as would be ideal, but it’s so easy to switch components.
doesn’t solve feature / requirement creep, though.

I’ve talked about it numerous times but getting a restored 2013 mbp for a few hundo last year was the best decision I’ve made tech related in a while. Wrote a ton of music on it so far.