So I grew up with a Yamaha PSR-38 keyboard, and although I took the thing less and less seriously over the years (though I always had mild fascination with the old Casiotones), I held onto it and more often than not included it for years in some drone improv sessions I used to put on (of all things, but it was never terribly out of place among the various improvised and toy instruments used in those sessions). Years later, I began messing around with MIDI in earnest for the first time in my life, and, since the thing had MIDI-in, I checked out its manual to see exactly what it was capable of.

The first thing I tried was to simply take advantage of its split bass section and its percussion section on the high end, and this was one of the ways I was getting to know the ORCA sequencing software, which was new to me at the time:

9 Likes, 0 Comments - ᴿᴹᴮᴸᴿˣ (@rmblrx) on Instagram: “A sad little track I was working on the other day. I'm not sure that I'm going to automate the…”

That eventually developed into a full track:

Now, that track used only one MIDI channel, but more recently I decided to try out its multi-channel capabilities and get a bit more creative with the voices themselves, this time using the MIDI capabilities of the NerdSEQ:

4 Likes, 0 Comments - ᴿᴹᴮᴸᴿˣ (@rmblrx) on Instagram: “A bit of late-night noodling with the #NerdSEQ controlling my old #YamahaPSR38. This the first time…”

I know these old keyboards aren’t the most interesting pieces of hardware, with nothing but presets and nil for parameters manipulate on those presets, but I’ve become quite interested in just what one can squeeze out of these things with more modern methods of MIDI sequencing.

Awesome – imho there’s a lot of territory to be explored with this approach. Nobukazu Takemura’s 2002 Water’s Suite album was made just by pumping MIDI into a yamaha MU15 (which does have some FX in addition to the preset voices) and it’s one of my favorites of his. 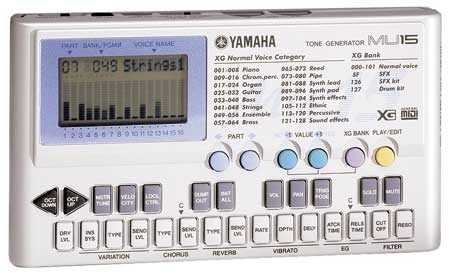 Track 3 and the second half of track 5 here are performed on a Yamaha TG-33 using a Max algorithm I wrote to be played with a Snyderphonics Manta controller. (The EP overall also uses software sample banks, 0-Coast, and a tiny bit of modular, but these tracks feature the TG-33; I think track 3 is exclusively TG-33)

Not that I noticed in the manual, but I did throw some LFO automation on the pitch of one of the voices, which ended up sounding like a warbly tape.

Ha, sorry. I misunderstood. There’s no MIDI CC control so far I can tell, but there is Pogram Change, which I do use since there’s apparently no other way to change the voice per channel. So yeah, step by step PC is possible and could likely enough approximate a parameter change. What little changes I could apply to the envelopes somewhat approached this, as well.