put a little oomph into it.

oomph is sequencer with multiple built-in synth and sample voices.

this script combines some previously contributed projects with additions. it currently encompasses:

many thanks for the guidance from @sixolet - I worked out a way to make almost every parameter modulateable through internal ramps/lfos thanks to studying their code. many thanks to @jaseknighter also who went through some early demos and made the code much better with his suggestions. happy to hear other suggestions.

most of the usage can be found in the parameters - you can directly edit parameters or use a midi controller to map devices for easy manipulation. there are also LFOs for nearly every parameter accessible through the “MOD” menus.

the main screen allows you to sequence the monophonic synth. the sequencer ui is based off the TB-303 pattern chart (pdf).

the parameters are set out in columns, where each column is one of the sixteen steps of the sequence.

the second row allows you to modify the accidentals of each note (b = flat, and # = sharp).

the third row allows you to change the octave of each note - M for minus octave (-1) and P for plus octave (+1).

the fourth row allows you to add an accent or slide. “O” does an accent (i.e. provides Omph) and “H” provides a slide (i.e. the note Holds longer).

the fifth row can change the articulation of the sequence. the “@” denotes a gate, the “o” is a rest" and a “-” after a gate provides a legato. the actual strength of a legato is controlled in teh parameters by the “sustain” parameter.

audio input is re-routed through norns into the tape emulator. because of this, instead of using the “MONITOR” control in the audio mixer, you should instead use the “INPUT LEVEL” control in the parameters menu.

the sample looper attempts to sync to the tempo by changing playback speed and resetting to the beginning at the beginning of the 16 step sequencer (can be controlled by a probability in the parametrs). the script tries to determine bpm from the filename if there is a “bpmX” in the name (i.e. mysample-bpm120-1.wav => 120 bpm). if there is no bpm available then the script figures out the bpm by a “best guess” approach by assuming that the loop is quantized to the nearest beat and checking to see which bpm allocates the most even number of beats.

there are some hard coded triggerable effects in the parameters menu and its possible to add your own since every parameter in the sample looper can be modulated using a variety of functions (sine, ramps, etc) - all you do is make a function that you want toggled (like this) and then add the name of that function to this array.

if you need a script to create quantized loops - checkout amen.

note: depending on how your loop is created, its possible that it doesn’t sound exactly in step with the rest of the sequences. to combat this there is a parameter at the bottom of the “LOOP” parameters called “latency” that lets you modulate how much the loop plays in front of or behind the beat.

copying patterns can be accomplished in the “BASS SEQUENCER” menu. simply select the pattern to copy to and from, and then trigger a copy.

grid is an alternative interface for the main norns screen - it is totally optional.

In the PARAM menu there is a MIDI menu that lets you select a midi device that can be used to input into the “BASS” engine or into the “PLAITS” engine. You can also route output from the “BASS” into an external MIDI device - there is an option to set the portamento CC of your device which will also be sent according to the sequencing. this menu also has options to input sequences using a MIDI device.

oomph will need 100mb of disk space (95 mb for wav files and 5 mb for SuperCollider files).

there are three steps to install.

secondly, keep maiden open and run the following line to make sure everything is copasetic:

thirdly, you need to restart your norns. now you can run oomph without issues.

to update the script just run the following in maiden:

20 characters of this is amazing! Bravo!

Dang norns in true groovebox form! This is rad.

May I steal the bassline engine, please? Sounds better than my lame attempt.

May I steal the bassline engine, please?

feel free to copy/cut/paste any code. the current engine is using tons of buses. a previous iteration with the same sound just utilized one bus and may be easier to integrate: oomph/Engine_Emu303.sc at 112ab6c8860e61a0d77b06ee497b5804d21a6ea0 · schollz/oomph · GitHub don’t hesitate to dm me if you need any help/explaination.

the main thing I added on top of the basic 303 emulation is the rising decay curve…as mentioned in this classic article: 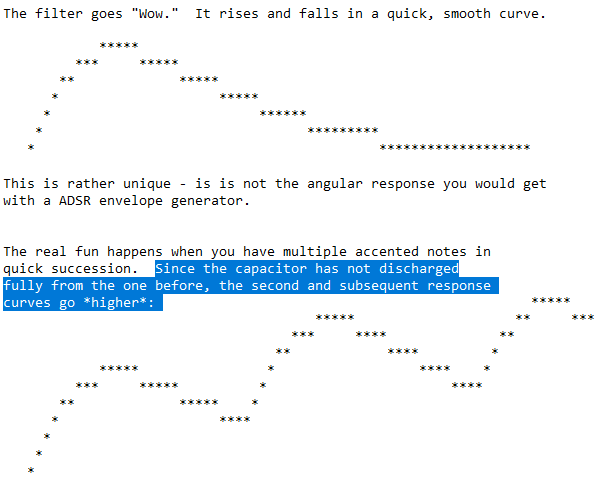 it took a bit but I figured out I could recapitulate this exact behavior using a single bus with multiple envelope generators in SuperCollider: 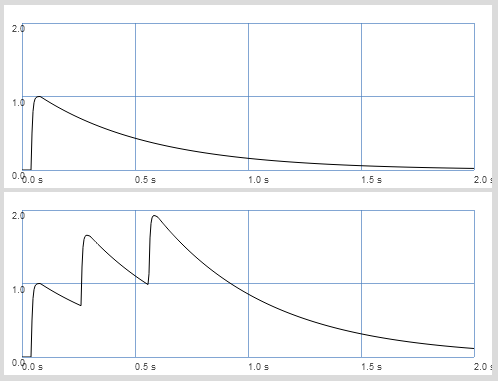 so a single bus is still required.

this is really good, amazing work

omg this demo is just such a magical capture – you’re a full wizard, zack. thank you for sharing this alchemy with us all, both in terms of the play and the code. superb.

I read that article, too, but didn’t get as far as implementing the cumulative envelope thing.

I did take the idea of adding the envelope back onto itself for accented notes from that post.

Tying the envelope decay time to tempo is an interesting idea. Maybe it would make more sense to link to step-length, rather than decay. I’m not sure that would be so easy to do though.

Anyway, I’m looking forward to having a look at the code!

This looks so cool! I love your work Infinitedigits!

I’ve updated and removed Oomph but still getting Supercollider fail. Anyone able to suggest what might have gone wrong?

*** WARNING *** Please fix your application to use the native API of Avahi!

I’ve updated and removed Oomph but still getting Supercollider fail. Anyone able to suggest what might have gone wrong?

can you share the output of the crone side of maiden? you can click the tab when and capture that output when you restart.

right back at you @dan_derks. when I started this project I consulted the moonshine docs which are just fantastic at getting me on the right foot when doing Supercollider stuff with norns (even after making sc things for a bit). thanks for all the support you constantly provide and your unending energy for this community.

can you share the output of the crone side of maiden?

ERROR: There is a discrepancy.

I can see lots of duplicate stuff there but not sure how to remove it!

this solution posted here should fix the issue:

running this should fix it: os.execute("rm -rf /home/we/.local/share/SuperCollider/Extensions/mi-UGens") the second install step of oomph actually tries checking for the duplicate Supercollider classes but the way that it checks missed the way that it is installed on yours already. for my own data, could you tell me how you installed miUgens ?

Oomph is so much fun, thank you very much for this.

One small question though: do loops have to be in the same folder als the ones installed with the script? I did not manage to play other files, e.g. in the tape folder.

Hi Folks -
This is my first time on here. Really enjoy this community. I’m a noob, and just getting comfortable loading scripts onto my Norns Shield (211028).
I have been attempting to install infinitedigits’ excellent new script Oomph via maiden, the install came up as error: load fail.
I’ve attached a screen grab from Matron here. Your insight would be appreciated.

@baldego welcome to the community!

i’m curious if you followed the custom installation instructions @infinitedigits documented on the Oomph thread?

I’ve attached a screen grab from Matron here. Your insight would be appreciated. 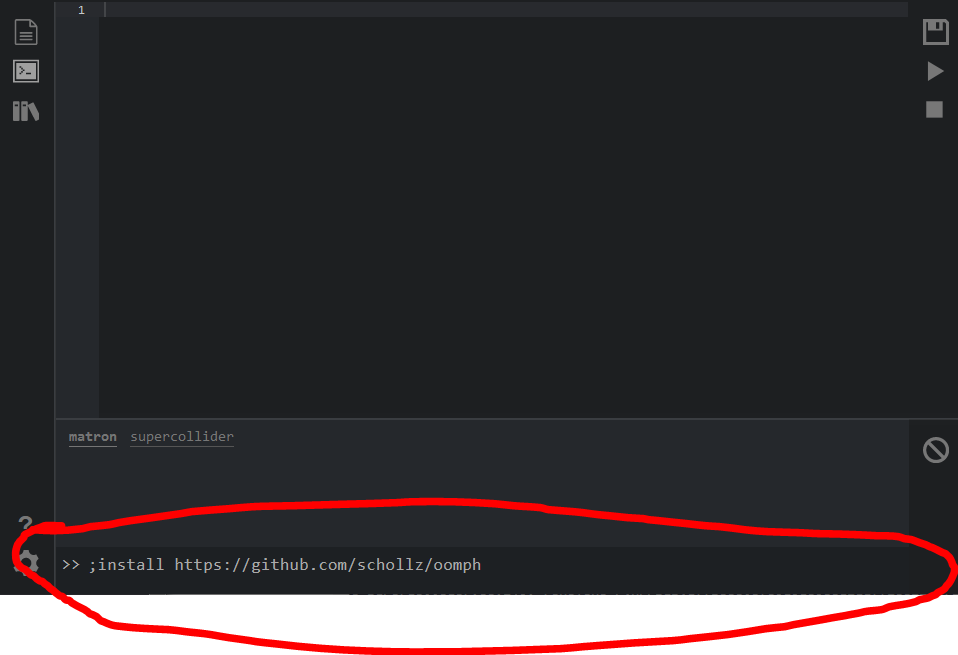 also a warm welcome to you @baldego!

do loops have to be in the same folder als the ones installed with the script? I did not manage to play other files, e.g. in the tape folder.

@infinitedigits thank you. I’ll give that a try, and update here.

@infinitedigits @jaseknighter yes, that did the trick. Oomph is now loaded on my Shield. Thank you for your help!

Tnak you @infinitedigits for your amazing work ! I installed Oomph through your instructions but my Norns screen keeps stucking on “loading”.

Here is what it says in Maiden