I’ve not been in this forum for long, posted a few noob questions and don’t own a Grid. I’m interested, I do want something serene and tranquil to make music on, and am tired of all the loads of gear. I’ve sold most of what I’ve owned, kept almost nothing.

I’ve noodled around with an OP-1 from time to time, which seems like a very unique prospect. I get the feeling, sometimes, the grid and the OP-1 are like kindred spirits. Very focused, very singular, very defined as instruments that can be used on their own, and in fact, that’s part of their beauty. And much of what comes out of them has a broken, beatiful quality to it (though obviously, that’s largely because they attract the kind of musicians that enjoy making that kind of music).

Anyone own both or have experience with both? What’s your take on this?

While I see your point, both share a beautiful design and seem to attract like minded people, I think they couldn’t actually be more different. The grid is as open as you can imagine. The op is very limited, in a wonderful and fun way yes, but still very limited. You can’t change its behaviour, you can adapt and get creative within those boundaries. If you look at a specific monome app, your comparison makes more sense, but then it’s the app itself, and not the monome

I decided to sell my op to put the money on eurorack and focus on that setup. Also found the output to be rather noisy. But what a beautiful interface the op has!

I own both a grid and an OP-1. My main reason is portability because I travel most of the time. That’s why neither Eurorack nor a Sub37 nor anything big makes any sense. Even if I love the OP-1 I think I would sell it if I were more at home to get some Monome and Mannequins modules or a Moog monosynth.
The answer is always the same, right? If you make music on your stuff it’s good.

Anyways: for people on the road it’s one of the most lightweight, fun and complex setups. Thumbs up. In the picture you see the Monome 128 and the Op-1 on my 13" Macbook. All three together take a minimum space in my luggage. 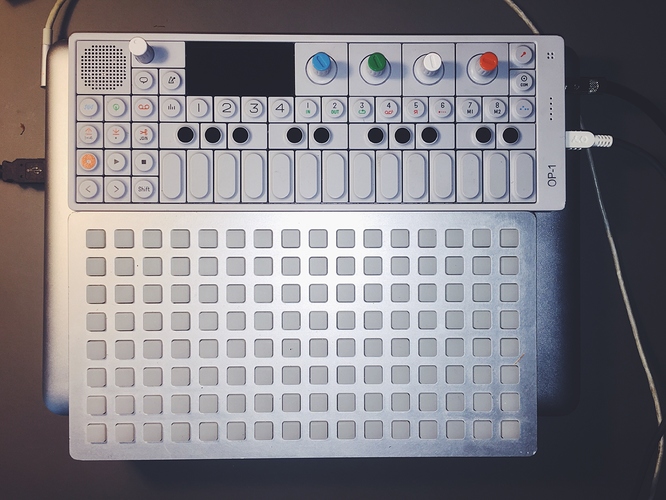 Many thanks for your replies, guys. I completely missed the point of the open architecture of the monome as compared to the OP-1 (or most other instruments, for that matter). That’s a really valid point.

I’m shy of computers when it comes to music, which is what’s holding me off. I work with them all the day and don’t worry about not being able to jack into it or being able to get it to work, it’s just that I find them distracting - very much so - when it comes to music. That’s my personal preference, certainly not a statement or absolute intended to make a point in either direction.

What keeps luring me back, is the amazing craftsmanship of the monome, the combination of apps that seem to enable musicians in great ways, with very few features, and just the general curiosity of the project.

We’ll see, I guess. Once something catches on, it’s usually just a matter of time before you pull the trigger.