Wow! I have a Pocket Chip too (indeed, I finally learned how to use trackers witn the Sunvox in the Pocket Chip

) and I really want to install ORCA on it!

Can you help me or give a link to where I can find some instructions?

I somehow forgot about the Pocket Chip; maybe I should try in the future to install Renoise on it too!

I was wondering, does the UXN version of Orca supports to comment a part? On Electron it’s Ctrl + / but this shortcut doesn’t seem to work on UXN.

Oh! I’ll add that this afternoon

Totally! You pretty much follow the same instructions for a raspi.
But don’t make the same mistake I did! I messed up not long after posting this and installed a new windows manager that cut the bottom out.

so I gotta redo everything. But here’s the link!
Here’s another from that same person for adding an internal speaker to pocket chip!

great! I’ll use this feature for sure…

I’ve also noticed during a few recordings, if I have similar patterns and tempo, but a second recording has more elements in the orca (uxn) sketch, it looks like the second recording will not be exactly synchronised with the first one. It’s not noticeable at the beginning, but after 4 minutes it shows 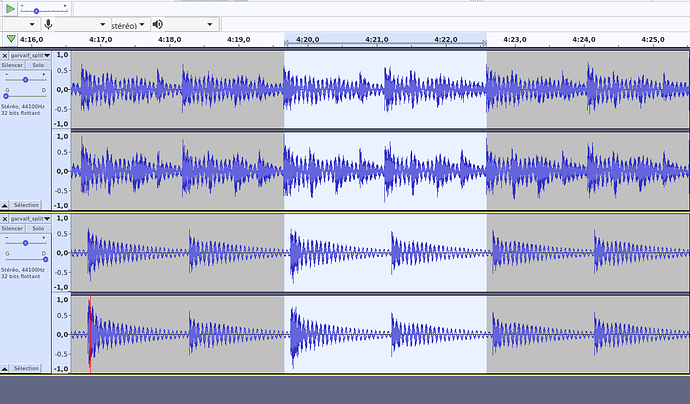 I suppose it’s inherent to the system. I haven’t tested the same sketches on the electron version to compare. It’s not a problem for me, because I’ve modified and cut the samples afterwards.

not sure if it’s me doing something wrong but i’ve started getting a crash & stack overflow error when trying to use the velocity input on the midi operator (uxn)
pretty sure i’m on up-to-date versions of uxn, orca, shim. just a heads up!

any plan to incorporate the UDP operator? 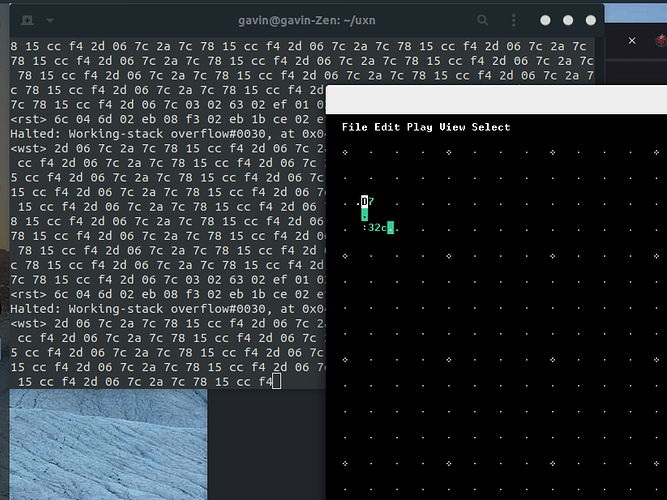 not sure if it’s me doing something wrong but i’ve started getting a crash & stack overflow error when trying to use the velocity input on the midi operator (uxn)
pretty sure i’m on up-to-date versions of uxn, orca, shim. just a heads up!

Mhmm, no you’re right, this looks broken. I’ll have a look

Thanks for spotting this one.

I was wondering, does the UXN version of Orca supports to comment a part? On Electron it’s Ctrl + / but this shortcut doesn’t seem to work on UXN.

any plan to incorporate the UDP operator?

As part of the shim? You could make a shim-like program that does the translation, orca-toy can send raw bytes out, so it can be used to do pretty much anything.

I accidentally had removed a single opcode.

thanks, I’ve just tested it and it’s perfect this way!

Took a lot longer than I expected it would, but I finally managed to implement a monochromatic mode to Orca, so people who’ve requested support for e-ink screens should be able to run this version without having characters turning invisible. 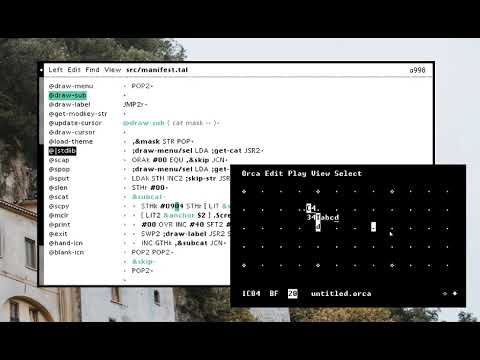 I have also improved the d-pad input method, and added grid toggling on/off, which I had forgotten about until now. I could make a little Playdate build if anyone is interested. 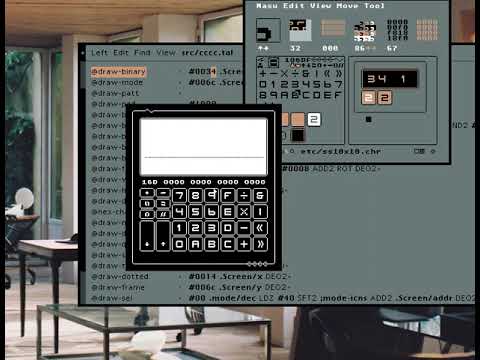 Trying to figure out a practical way to degrade applications from 4 colors to monochromatic has been a pretty fun challenge.

It looks nice except the launcher selectors are invisible (I know it’s off topic, but this is intertwined) 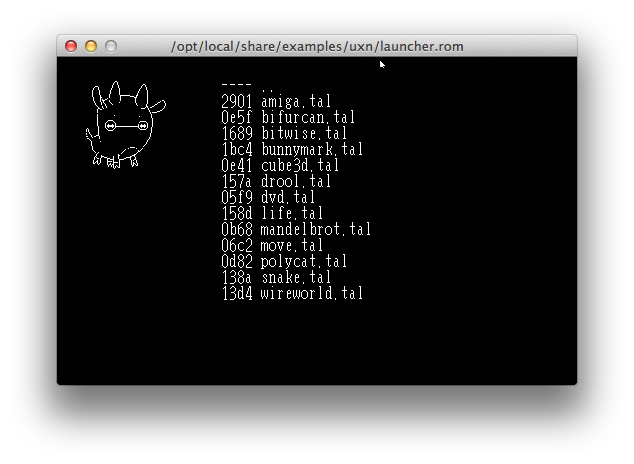 Ah yes, the only Uxn roms that I’ve ported so far are Orca, CCCC and Catclock. I’m gradually going through the list

I am looking for a way to create a vallue that is bigger then Z. So something bigger then 36. The A function has not been my friend yet.

The cell itself can’t hold a value higher than 36, but you could create a patch that saves the overflow of an addition onto another cell, and use two numbers to represent a higher value.

If you want to simply send a value that it bigger than Z, you could use the byte or note operators, in the Uxn version, to send a value between 0-255.

Hey! Sorry if this is the wrong place for this but I’m just wondering if there’s a way to clock the random function?

Should probably add some context incase there’s another way to do it. I’m trying to get some random notes in a scale but I just want to slow this down a bit. 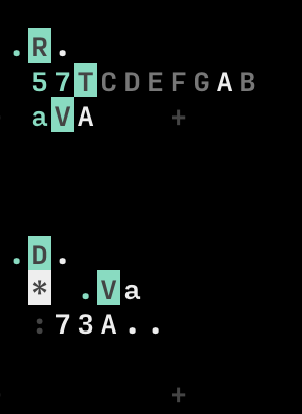 you can use a lowercase R and it will only fire when it receives a bang - then you can clock it with an adjacent D or U command, etc

this is true of the lowercase version of any command, btw

Oh wow that changes everything! Thanks!

I’ve been doing some hex dumping of network traffic – strictly for responsible educational purposes of course – and it’s been reminding me of Orca and you all. 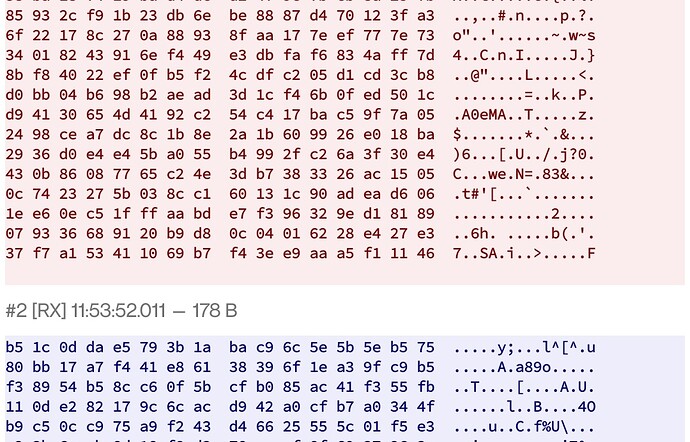 After years of Orca, I can assure you that whenever I see dot-filled hexdumps, my brain automatically tries to make sense of it as an Orca program first.

Has anyone actually made a script that converts any file to Orca format, with “this is what it’d look like in the character portion of hex editor with this column width” kind of logic, “quantizing” the unknown symbols to anothers or simply removing them? I’m sure that would be interesting…

I would start with the old school Unix ways

Then some transformation filter with tr, sed, awk or Python (or Perl ;))