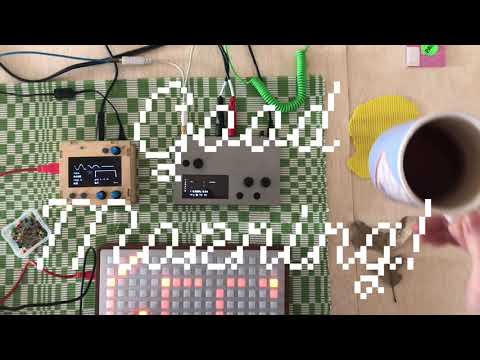 orgn is a 3-operator FM synthesizer followed by an FX engine which loosley emulates yamaha’s ultra-cheap range of consumer keyboards from the 80’s & 90’s - the PortaSound series. whereas these keyboards were locked into 100 or so sometimes corny factory presets (with a catchy demo song to match), orgn gives you full control over the synthesis & fx engines. you can also process external signals through the FX via the norns inputs.

this project began in max about 4 years ago when I wanted a little more from my PSS-170, and today I’m happy to share the 5th & final iteration of this idea : )

in maiden, head to the books, refresh community catalog, install orgn, then run SYSTEM > RESTART to boot the new engine

POSSIBLE STROBE WARINING on the screen graphics for this script. I’ll add an option to disable the graphics as soon as I get a chance

although it can pull its weight as a solo instrument - orgn was originally imagined as a companion to audio looping instruments like wrms or anachronism. pure tones & textures facilitate layering while on-grid controls and macro mapping allows one to speedily morph patches for each new layer of a loop. while I personally use two norns for this kind of setup, I’ll be maintaining a short list of “combo” scripts that put the orgn engine & grid interface in the background of another norns script utilizing softcut. midi mapping is encouraged in these cases as you’ll no longer have access to on-screen encoder controls.

combo scripts may be installed separately via the maiden catalog. both scripts will need to be installed first.

for various code snippets & jumping off points for the effects engine 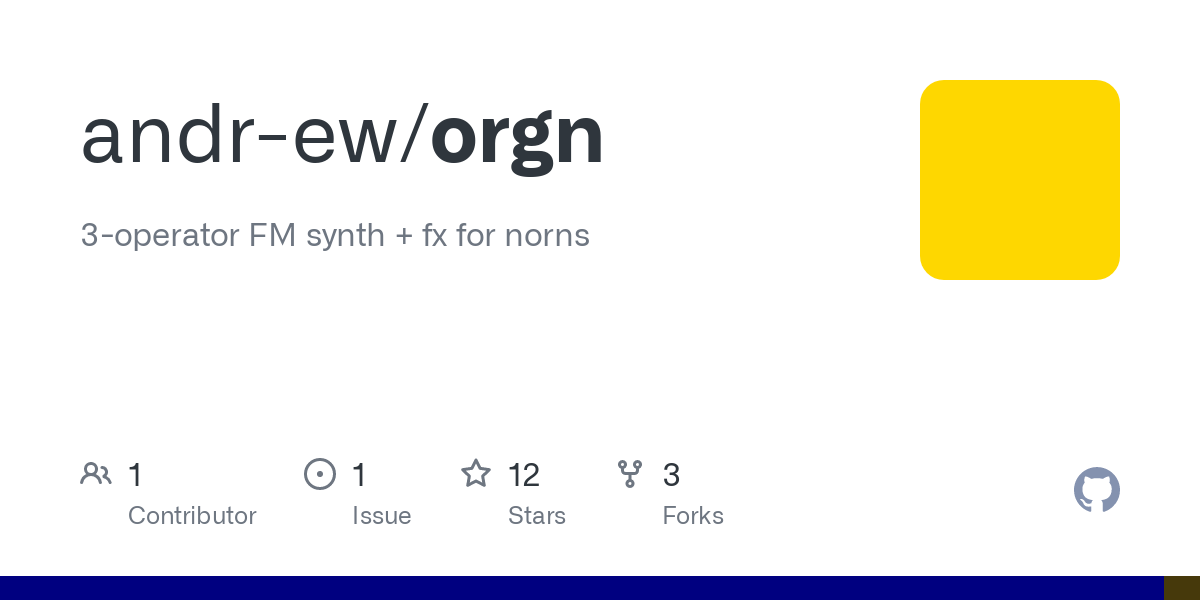 3-operator FM synth + fx for norns. Contribute to andr-ew/orgn development by creating an account on GitHub.

Has that great yamahish flavor

Yesssssssss, congrats! Been super excited about this script for a while!

Sounds so good and appreciate the 64 support. Looking forward to toying with the wrms combo too!

This is gorgeous andrew, thank you so much!

This is insanely nice. So much fun. Thanks for sharing.

words are simply not enough for this moment
congrats on release + many MANY thanks for sharing your creations with us!

I already played a few evenings with this since I saw it on your IG feed, it is such a nice script and together with wrms and the effects I got into so many nice and crunchy zones. Thanks so much for sharing it!

this is awesome. well done.

ooooof i tried to notate all the examples that hit the exact right zones for me and ended up with basically a tracklist for the nicest lil album ever delivered as a release vid.

this is such a special friend to let us spend time with, thank you for guiding these vibrant energies into code and then shaping them into instruments for everyone. so much work obviously went into this, not only in terms of interaction but also its wide + joyful sonic lexicon

the nicest lil album ever delivered as a release vid.

yeah
just have to second this

Wow this looks so fantastic!! I was so happy to catch some sightings of it on your instagram, and really I cant wait to give it a go. It’s like you made the norns synth engine of my dreams. Congratulations and thank you so much for sharing it with everyone!

I’m most likely missing something but - I can’t seem to get any USB MIDI love working. Tried a Keystep 32 and a novation launchpad.

does the keyboard work with molly the polly ? (/anything else)

(thank you for the love everyone ! jeez)

Just tested with Molly and Icarus. Both are working… going to go back and try again with ORGN just in case… sadly nope.

ok just I pushed a fix for midi in, does it work ? - - the utterly weird thing is that I haven’t changed any code since I made that video

Yay! It’s working. Thank you for the quick fix. Now to dive in.

congrats on the release! such a beautiful demo. have only had a chance to play for a few minutes but wanted to chime in that midi is working for me as well.

So, I think the crinkle max value needs to be clamped at 1? I keep blowing up super collider and the culprit seems to be pushing crinkle past 1.