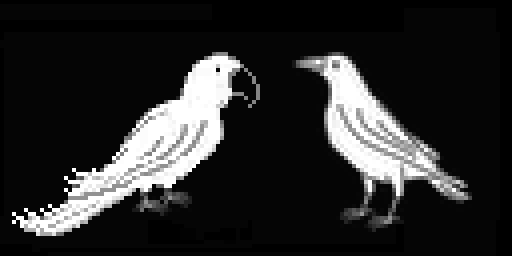 a cv recorder and player for norns+crow

parrot allows crow inputs 1 and 2 to record cv which may then be replayed out of crow outputs 1-4.

parrot is based on the cvdelay script built into @Galapagoose’s bowering crow script collection following a suggestion by @lijnenspel.

many, many thank to @eigen for creating a lovely parrot image for this script and to @justmat for the crow image i am borrowing from his crow_talk script.

I had an idea for a script that similarly did/does some of what this does (LOVE the idea of the Rectified and Quantized Voltages!).

My idea was to use Crow as a semi generative powerhouse when used with a Function Generator with an EOR or EOC output.

The idea was to use that pulse to trigger input 1 to S&H a random voltage derived on input 2 (or could even be done with on rise by selecting a random math value).

This could then be quantized on Output 1 and sent to an oscillator to provide pitch information with outputs 2-4 further being manipulating the Function Generator Rise & Fall times.

I don’t know if this could/should be built into Parrot, or become another Script.

Either way it has my brain thinking and I may put some thoughts on paper about bringing it to life.

your idea is really interesting, and i’d be happy to help investigate putting your ideas into parrot or another script.