I’ve completed the PCB layouts for a small range of passive utility module’s, cramming as much as I can (while still remaining usable) into a Hammond 1590BB enclosure.

The Attenuator and Switch PCB’s have pad’s for the switched jack pin (allowing for connecting up to a voltage reference in the future).

Here’s an Inkscape sketch (all laid out and designed to scale to make sure everything fits): 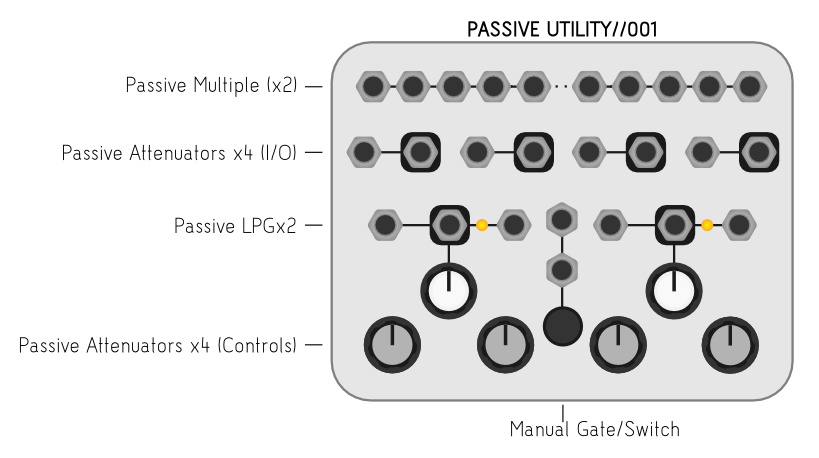 Sketch including PCB outlines (the attenuator pots will be wired to the jack PCB’s):

I’ll be uploading and ordering the PCB’s from OSH park this week.

I can keep an update on progress if it is of interest to others (I’ll make everything available on OSH park so people can build their own)?

This is good for those of us who have 0coast and a few other bits and pieces… should really start up a new thread for non-rack modular as this where a few of us a going I think.

or Bodgeular whats the best concept for this?

1 input two outputs with diodes facing opposite directions (with CL synths the “0” voltage is 4.5v so this splits the top half and bottom half into the two outputs) of course it can be used the other way for some combining two sources

and toggle switches are always fun

Really nice! I’ve been planning more or less this exact thing, but with a ring mod instead of the LPGs. Would definitely be interested in a PCB of this though

Sounds cool. I was looking at putting a ring mod into the unit (settled on 2xLPG instead though).

If you have the ring mod circuit/schematic I’m sure I could do a layout for a board that will fit the existing enclosure (perhaps replacing one of the LPG’s).

The idea I had is that I (or anyone else) can use/combine these modules how they see fit (rather than doing the layout as one big PCB). The PCB’s will be an open project on OSH park so anyone can order them.

The schematic/diagram I’ve been going from is here: https://www.cgs.synth.net/modules/cgsrr.html - hopefully that’s everything you’d need. I’m a complete beginner!

How much do you imagine these boards would go for?

Thanks, looks cool! Germanium diodes can be a pain to get hold of (and vary quite a lot), but from the look of it there are silicon alternatives that will do the job.

The boards will be whatever OSH park charges; you would just order directly through them.

OSH park also allows you to share a design, which can then be ordered by anyone through their website. They then collate a load of other orders together and place this (huge) order directly with the manufacturer (therefore getting the cost down for everyone).

I love the concept. At the moment I have a few passive modules in a cardboard box but this is obviously more elegant.

The one input I have, is to normal the attenuator outputs in pais of two. So you have a simple mixer which can come in handy I guess.

Nice! I have all the components for the ring mod - been working it out on a breadboard. Only thing that would potentially be an issue is the transformers, since they’re quite big! I don’t know if that would be a problem in terms of getting it in the enclosure, but worth a go I guess

Neato! I diyed similar a good while back. I also squeezed a passive ring mid in there. 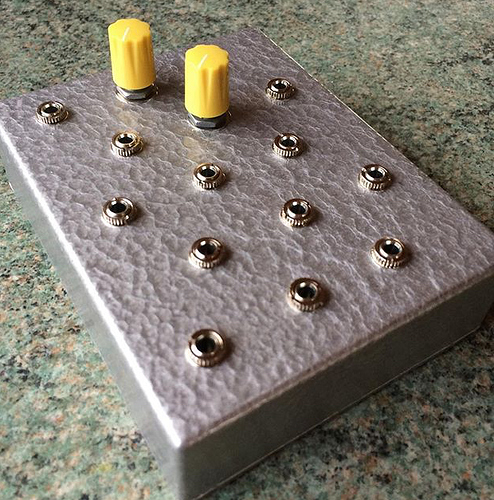 passive utility box, jacks in rows of 3, front to back:

Grow this just a little and add the Nearness functionality to the top row and (kisses fingers).

Grow this just a little and add the Nearness functionality to the top row and (kisses fingers).

That wouldn’t be passive anymore then…

I agree; as soon as you add Eurorack power requirements (+/-12VDC supply) the best (not to mention most cost effective) place to put them is in the rack really. I’ve seen the Nearness module thread and think that it will make a neat little 2hp unit

For the passive side, adding a half wave rectifier (which could replace the manual gate/switch), ring mod, and normalizing the attenuator outputs together to make a passive mixer all sound like a good idea.

I’m going to integrate those and go from there.

Thanks for the input guys!

93 Likes, 4 Comments - Evan Craig (@skullservant) on Instagram: “@landscape_fm ALL FLESH is in!”

Reminded me of this passive mult box I saw on instagram the other day, thought it was cool! Some touch control could be an interesting addition

Edit: excuse my ignorance @Ithacus, is this a single PCB? Or several teeny ones?

Changing anything else would mean changing the layout I currently have (I like the symmetry and overall layout as it is).

Looking at how it will work out, an individual order from OSH park for everything will leave me 1xMult, 2xRectifier, 1xLPG, 1xAttenuator and 2Manual Gate boards unused. I’ll probably do another 1590BB layout using those boards (so one OSH park order makes the 2 units).

I like that idea. And keeping the passive stuff separate is a really handy idea.

Awesome passive box! I’ve been DIY’ing some passive modules for my Bug system using the blank panels. So far I’ve made a couple of format jumblers and some switchable diode negative voltage removers (allows for logic OR function by stacking the banana outs). i’m going to do DC offset removal via switchable capacitors next to get variable decay envelopes from squarewaves/gates, some touchplates for skin patching and passive attenuators.