Not a new idea but a newer one to my personal practice. A frontier I’m focusing on mainly to create more variety in the structure of my patches, though I’ve found a lot of other fun things along the way. Would love to hear what you do!

Some things I’ve been playing with:

An offset into a switch into a sequencer’s run jack, so that some elements of a patch will be completely inactive for periods of time. Master sequencer clocks the switch so things start on beat.

Sequencing specific uneven rhythms to clock a second sequencer with a bit (or a lot) of “wonky” flavor.

Taking advantage of reset inputs so that things can go polymetric, or even completely drift and fall apart, before coming back to something familiar.

A sequencer with step probability advancing a melody on another, decoupling notes from the landing points they would have had within the phrase.

I’m quite crappy in making exciting patches with sequencers. But what I’ve managed to do by using a guitar clock the entire setup has made me come up with way more musical and, to me, likable stuff.
I’m also quite crappy in playing in tempo so nowadays I tend to use one sequencer getting clocked by the guitar and try to play along in sync with the other gear.
Like this:
https://www.instagram.com/p/BrLb51SBYUA/?utm_source=ig_share_sheet&igshid=1il9w5nv8tpg3

I’ve got so much more to learn and I’m eager to hear if anybody else here use to make patches the way I do. I’m selfish enough to see if I can ”steal” any ideas…

Nice, what do you use to clock the sequencer from the guitar?

Ya this is pretty much what is the most interesting part about modular to me and ive spoken about it on various threads.

Many timing events all linked together in interesting ways so you can get a trickle chain reaction with all sorts of variables.

It gets super interesting when these elements/modules can go from sub audio into audio rate(like in all the R & S serge stuff)
…so everything is potentially the "sequence or source of timing pulse and voltage control and audio generator/processor in a patch…being able to rapidly change the roles of these element yields fascinating results. Off course the key in all of this is being able to tune into interesting rhythms.

As autechre once said and ive probably quoted this before "blur the lines between sequencer and synthesizer.

Some of the things I do (in addition to the ones you mentioned):
use switches to swap between sequences / add together sequences for small windows of time. If one is much faster than the other this can be used to add trills, especially effective if you use start/stop or reset to make it always be at the right note to start the trill.
Put a sequencer through a VCA, then into a S&H before going into a quantizer, that way you can dynamically increase/decrease the range of notes covered by the sequence. Sequence the VCA for ultimate control. The S&H prevents glissandos when using envelopes or LFOs to open the VCA, but can be used with the sequenced version to add another source of rhythmic variety, especially if you are using the second sequencer to generate notes as well, stops everything always changing at the same time.
If one of the sequencers has vc over direction and mode, or first/last note, this adds a huge source of variety. Especially if you sequence the sequencer- you can change direction at certain points, or switch between directional and voltage addressed or random modes.
Make sequencers using clock dividers and a matrix mixer, put through switches to swap between sets of notes.
Use feedback- I’ll try and dig out my patch notes, but I once created a patch that used two interacting sequencers that were adding together in a feedback loop via S&H,with a control mechanism that kept it within a range of notes.
Run a sequence into an addressed switch, and send the various outputs to different VCOs. Address the switch with a sequencer to control which output gets the note.

It’s so easy, just a contact mic going into Ears from Mutable Instruments and letting its gate out trigger the sequencer. The best and most surprising results has been when the guitar is running my Analog Four.
Sorry for posting another clip from instagram, but this one shows what I mean a little bit clearer:
https://www.instagram.com/p/BneSvO0gjkP/

Very simple patch and so much fun to use: 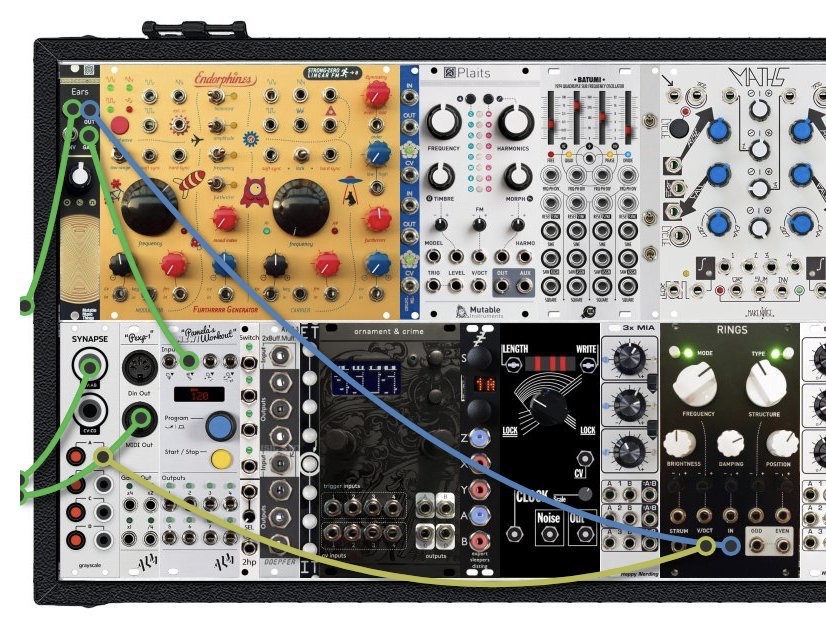 Here’s the feedback patch - note that the attenuators and inverters are used to lower the amount of signal sent through to the other sequencer, to prevent the pitch just running higher and higher. Here’s a patch using this idea - but with an additional VCA between the VCA and S&H, which is controlled by a third and much slower sequencer to change the range of feedback over time: https://soundcloud.com/ikjoyce/sequencer-interaction

I’ve used basic sequencers at audio rate before for noises, but I’ve never thought about using them as both a sequencer and a sound source. That’s an amazing concept!

Things like that make a great case for keeping sequencing in the rack.

I really enjoy using a sequencer to modulate the clock source as well as a voice, so you get irregularly timed notes depending on the note. I’m pretty sure that’s an old trick, but it’s one I really enjoy. Right now I’ve been messing around with 2 NLC 4seq in my eurorack, which is just a simple 4 step sequencer, but with two outputs. One goes forwards and one goes backwards, and then there’s an input to reverse direction as well. Sequencing the clock, adding voltages together, using one as a trigger to reverse direction(it just needs something over a certain voltage), it quickly makes for a fun, simple system that grows funky.

Ah, this is subject very close to my heart and which I’ve discussed a lot in workshops (https://www.youtube.com/watch?v=oIfgR-jrV_Q), on meetups, and on MW.

From a top level point the best practices I’ve come up with are: feedback systems (e.g. make sure the sequencer is influencing its clock), interchange of disparate elements (e.g use a sequential switch to move between sequencers that are not clocked from the same source) and superposition of elements (e.g ever tried using multiple quantizers like a sieve?).

One thing I really like to do is use my main clock on various different ways. Use a division of the main clock that goes through a probability process as a global reset. Introduce it via a switch to glitch out your performance or bring timing chaos.

70 Likes, 14 Comments - Konstantine (@konstantineffff) on Instagram: “A video of an old iteration of my live setup, just before #powwow📡 I always try to program groovy…”

@andrewhuang check the Ladik S-190 Clock Distributor if you want sequencers to be quiet for a while. It’s a module that has gone undetected from the majority of users. I’m currently discussing with a manufacturer about something that will bring some macro options (from a sequencing composition perspective) that are much needed in Eurorack.

@bjarlstedt check the Barton BMC28 Live Rhythm Quantizer. It’s an absolutely lovely module if you have issues with timing, as it forces your hits inside a time window that set up, based on an incoming clock. Absolutely brilliant, and can be pushed to really interesting places with clever patching.

Oh, I haven’t heard of that one before. Guess I’m not the only one though.
I’ve got 6hp left to fill in my case with something…

Question: How do I find someone that can sell me this module, or build it for me?

Barton modules are DIY although they do appear every now and then for sale. If you head over to his website you’ll read the feature-set etc. The concept is rather simple, but could be helpful for your way of playing. Or not. I just thought I’d suggest it.

One way that I like to use it is to plug a second faster, clock and then set up the window so that the hits of the fast clock only happen inside a window set around (before or after) my main clock. This concept can provide a lot of ground for interesting experimentation.

The original idea is that it helps you tame your playing by making sure that your manual hits are normalized.

Answer: You can hit Barton directly, see if he does that, follow it on Modular Grid in case it appears, search for it on Facebook pages, or ask for it on Muffwiggler. I’m not sure if lines has a BST section. That could also be a nice place to look for it.

This is a super interesting topic.

I’ve also become a bit obsessed with the sound of this Kieth Fullerton-Whitman piece here: https://www.macba.cat/en/whitman_hausswolff, particularly the bit that starts around 13:50 for 10-15mins. I’m not especially concerned with what he did to create that piece, but imaging some of the clocking functions and interactions in the system has piqued my interest in doing this with voltage instead of bits.

I picked up a cheap Muxlicer and now my mind wanders with ways it could be patched alongside other stuff. The 60ms pods don’t help - here is a thought on combining a set of Befaco and smaller RYO modules into two identical sequencers with many possible switching options. Imagine each row as a separate pod and patching between them: 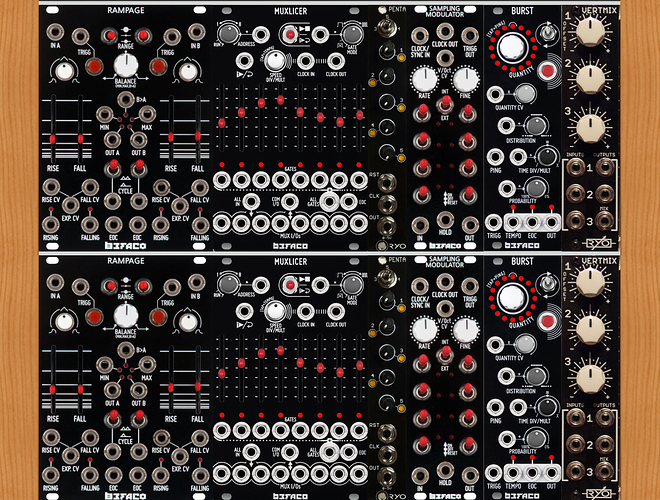 So multiple sequencing, switching, clocking options (including clocking from the burst?). Imagining a system that can sometimes move across the boundary of rhythmic - random. It seems like there are limitless combinations here, but my question is - are there other utilities that make this work? And after the sequencing bit you’d need a quantizer, oscillator(s), envelopes then whatever filters, effects etc, I assume?

btw - my euro at the moment is ES8 + effects, but I’ve been having lots of fun clocking in this way between Morphagene - Magneto and Rampage.

I don’t know what KFW used for the piece you linked (but you can see some of his racks on modulargrid here). He seems to rely heavily on using analog shift registers which you are missing.
If you have an ES-8 you perhaps could do the sequencing + ASR from Max.

You can combine the Rampage + Burst + Sampling Modulator for a S&H into a quantizer and then into an ASR. Common ones now are Intellijel Shifty or Toppobrillo Quantimator (I have a Shifty, and enjoy it, but I’ve seen a comment elsewhere that KFW prefers the latter over the former). I like the Shifty because it outputs gates.

proper response incoming but I LOVE THIS THREAD < 3

Good thoughts. I thought someone might mention shift registers - from following the other thread. 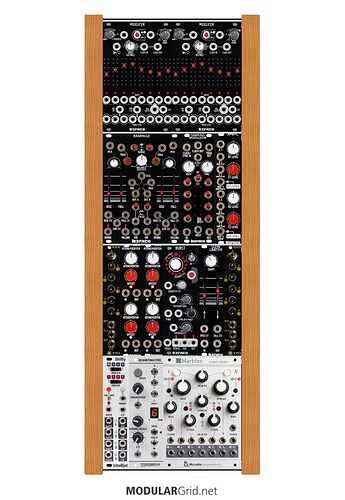 If I recall correctly Keith uses the Quantimator a lot, which has a shift register mode. I can highly suggest the Synthesis Technology E102 which is a digital shift register.