A collection of pure data objects designed for connecting to and communicating with monome devices. 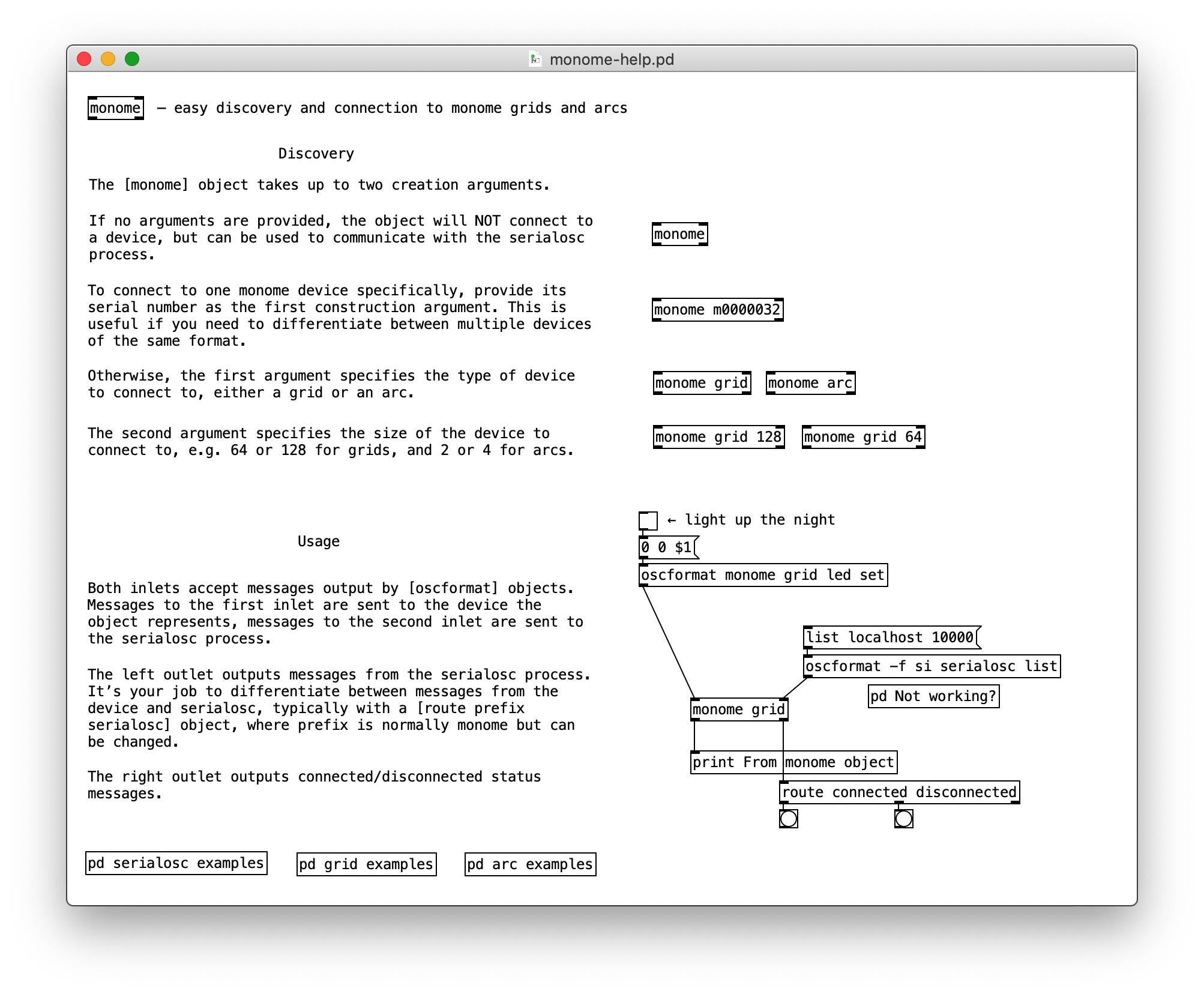 Download instructions and getting started information can be found at github: 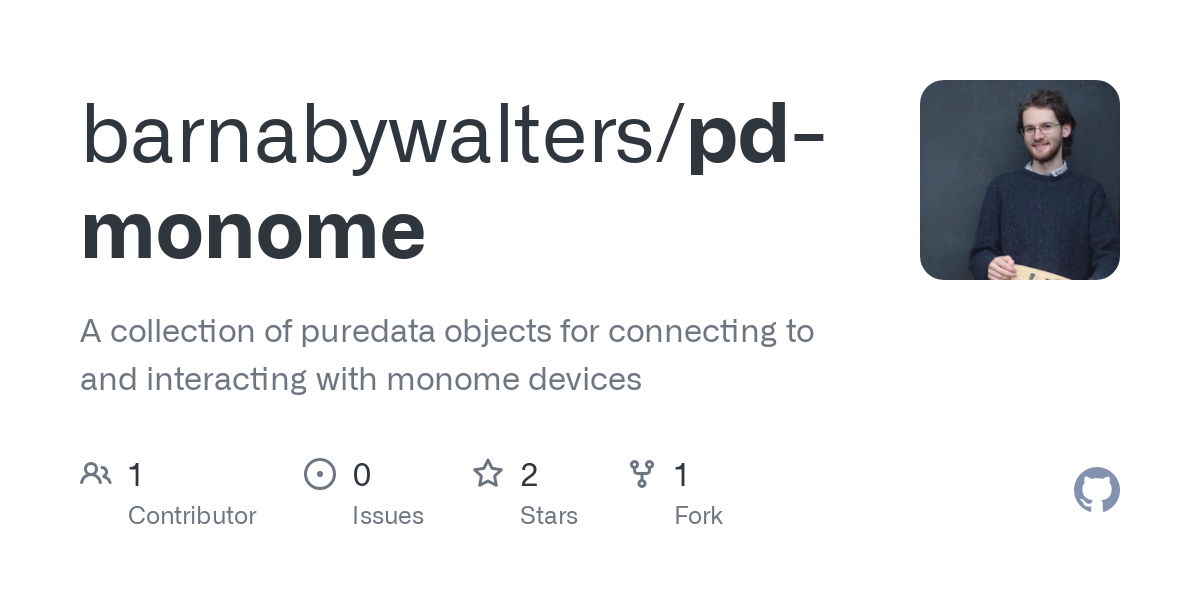 GitHub - barnabywalters/pd-monome: A collection of puredata objects for...

Refer to the built-in example and help patches, and ask here for help if you’re having issues.

I just released a collection of puredata objects for easily connecting to and communicating with monome grids and arcs.

The [monome] object handles discovery and connection, and I started working on a collection of utilities and UI elements such as faders, radio buttons, multipurpose keys, and chromatic keyboard rows — only for the grid right now, but I will work on some similar arc utilities when I get around to it.

It seems like the cutting edge of grid/arc development is happening in lua/sc over on the norns, but pd on a computer is still a great choice for quickly having fun with electronic audio, and I wanted to make it easier for myself and others to involve grids and arcs in that.

Feedback very much appreciated, especially from people with experience working with grids and OSC. Please let me know either here or in gh issues if something is suboptimal or unclear.

A demo of all the grid UI elements I made so far (more details in the demo patch): 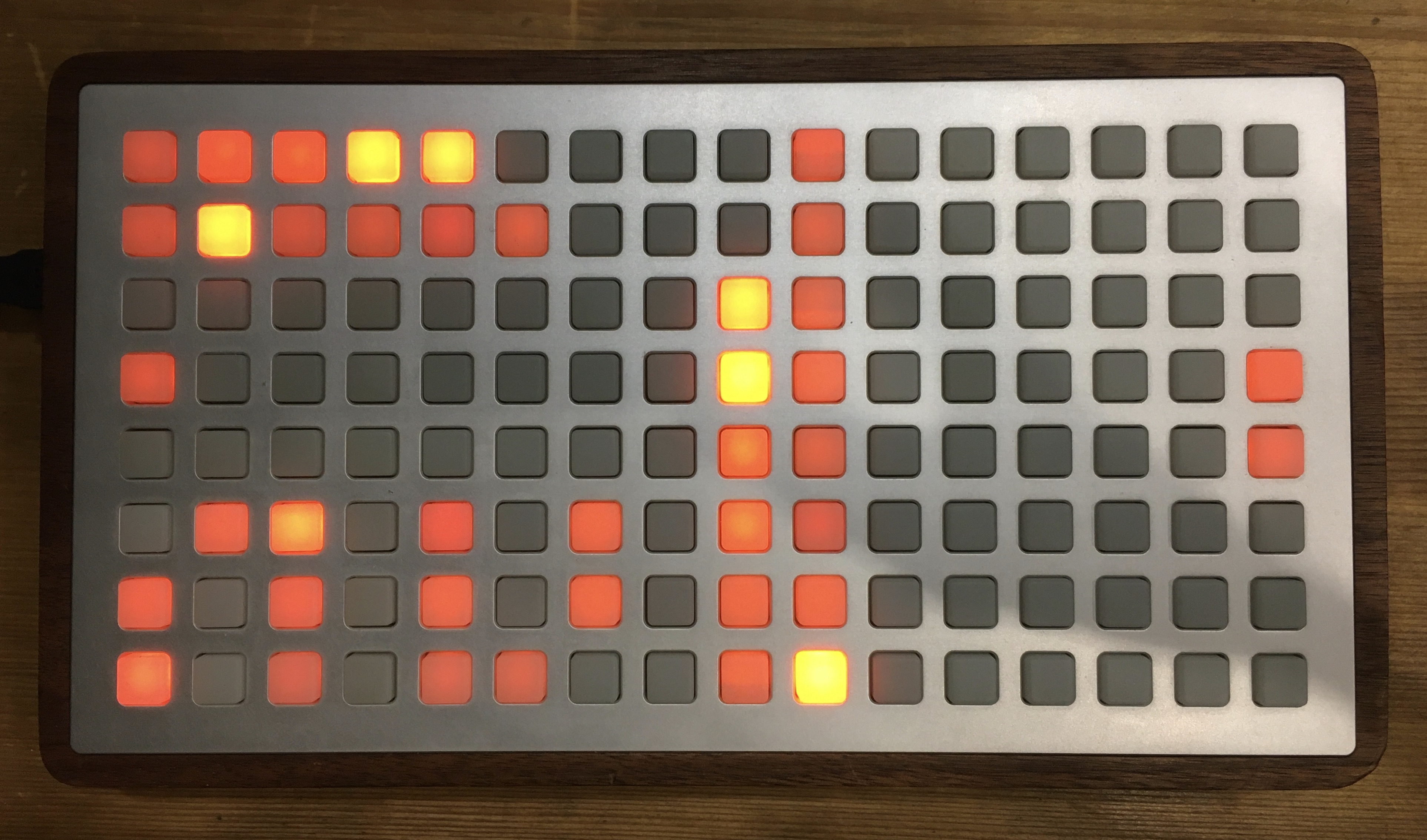 thanks for posting! i tried it out with my grid 128 and haven’t been able to get it to work, running latest purr data on osx… I can see correct keypress messages from the grid coming out of print with the debug on but nothing else seems to work. Is there something i’m missing?

I just tested the patches with purr data, and all the main functionality seems to work fine.* Which patch are you trying to use exactly, and what’s not working? The demos in the [monome] help patch sadly don’t really work live due to the grid already having been “claimed” by one of the demo [monome] objects. Try opening only examples/grid-kb.pd or examples/grid-ui-demo.pd and see if you get feedback on the grid.

btw, I just pushed an update which adds a simple synth to grid-kb to make it useful without connecting a separate MIDI synth. It’s much more fun this way!

*I did make a small compatibility change, but it’s to a utility object which wasn’t released before I posted this reply, so can’t have been causing problems for you

hmm, yeah just opening grid-kb.pd, latest pull from your repo… no joy, if I enable debugging I see keypresses fine though. just no visual feedback and no audio. other pd patches working as usual, sound, etc… 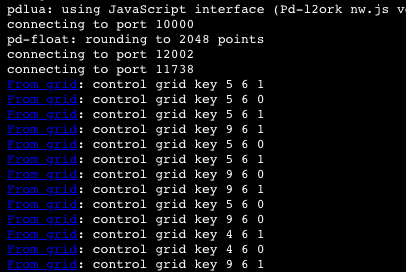 Bravo @barnaby! I’ve downloaded your most recent push (with the simple synth) and so far everything is working for me.

It may be worth linking to or mentioning the serialosc dependency in the docs? The machine I’m testing on is not my usual machine, so I didn’t have serialosc installed at first.

I think I’ve found a bug in grid-kb.pd, where if I quickly press one button followed by another, the second button I press gets stuck and stays lit, and the sound continues. As soon as I press another button it clears itself up. I’ll poke around and see if I can tweak that.

@forrest Have you confirmed that everything is in your path? I added the top level folder to my path first, but I didn’t add the util subfolder and so Pd couldn’t find some of the abstractions needed to get things working. It may also be worth trying with vanilla just to see how that goes?

yes everything is in the correct path, this is a brand new 2021 grid, and it’s registered and unregistered on plugging / un-plugging 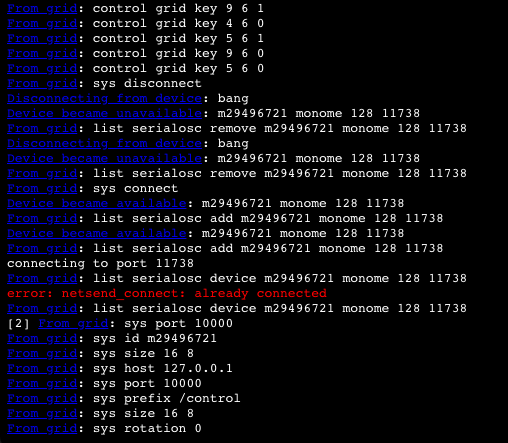 that is with grid-kb currently loaded, never had much success running vanilla on my machine so I can’t test with that.

What OS are you on? I’ve also got one of the new grids–from the 2020 batch, which is identical to my understanding.

Looking at your debug log there, the only difference compared to what I’m seeing is the “sys prefix /control” line–on my end I see “sys prefix /monome”. Everything you’re seeing is what I see. What I don’t know is if that sys prefix is something that will differ between OS platforms?

I’m trying to dig through the patches right now to see if I can find if that differing sys prefix is causing some OSC message not to be routed properly. Haven’t found anything yet…

mac, I see there is a prefix file in the repo that talks about this, i’ll dig into that

edit: ah that did it… hooked up the oscformat with list / monome fixed it! 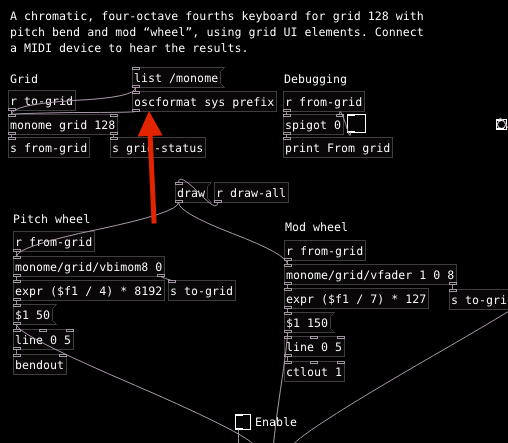 Yeah I think it’s just a matter of changing the [oscformat] objects in the abstractions to say ‘control’ instead of ‘monome’–or tweaking serialosc somehow to use ‘monome’ instead of ‘control’?

EDIT: Ahh yes! Perfect. Look at that–the answer was right there in the docs

Good to see you managed to find the issue! I should probably make the warning about prefixes more prominent in the documentation. I really tried to make the [monome] object prefix-agnostic, but due to the poor OSC support in vanilla pd I would have to implement an OSC string padding algorithm myself. I got half way through before deciding to wait for someone to complain about the prefixes

Did you change the prefix to /control yourself, or is that how grids come configured these days? I couldn’t really find any current information about how to deal with device prefixes so I feel like I’m fumbling around in the dark a bit here.

It may be worth linking to or mentioning the serialosc dependency in the docs? The machine I’m testing on is not my usual machine, so I didn’t have serialosc installed at first.

[edit] now that I re-read your comment, I see what you mean. Good point, I’ll mention that in the documentation.

I think I’ve found a bug in grid-kb.pd, where if I quickly press one button followed by another, the second button I press gets stuck and stays lit, and the sound continues. As soon as I press another button it clears itself up. I’ll poke around and see if I can tweak that.

I’ve encountered a similar bug a few times but didn’t take the time to debug it yet. Let me know if you figure out what’s causing it!

now that I re-read your comment, I see what you mean. Good point, I’ll mention that in the documentation.

Glad you figured out what I meant! I was writing in haste and I realize now I was being kind of vague

It is reasonable to expect most folks to already know about that dependency or, as in my case, remember that they need it when things aren’t working. But I figure in case someone who hasn’t done anything before with serialosc comes along, this will be helpful!

I’ve encountered a similar bug a few times but didn’t take the time to debug it yet. Let me know if you figure out what’s causing it!

EDIT: I was wrong–these stuck keys are happening at the source. I logged the raw output of [netreceive] in the server-setup subpatch, and I can see it happening there. For some reason some keyup events are not passing through until any other button is pressed. Once any button is pressed, that lost keyup event comes through, followed by the keydown event for the button pressed. So, the problem is either between serialosc and Pd, or within serialosc itself.

Did you change the prefix to /control yourself, or is that how grids come configured these days?

i didn’t change anything since receiving it, so imagine that’s how it came, though i have used older generation grids on this computer in the past so can’t be sure

i didn’t change anything since receiving it, so imagine that’s how it came, though i have used older generation grids on this computer in the past so can’t be sure

Hmm, interesting. Perhaps @tehn could give us some insight into what prefix factory grids are shipped with? (also, it seems like there’s enough to discuss for pd-monome to have its own thread in the Library category — could you move these posts to a new Library thread, or should I make one myself?)

Once any button is pressed, that lost keyup event comes through, followed by the keydown event for the button pressed. So, the problem is either between serialosc and Pd, or within serialosc itself.

Oh that’s really weird, and sounds like a different problem to the one I’ve seen. Doesn’t sound like there’s much I can do about it, but I’ll keep an eye out. Perhaps there’s some sort of OSC message bundling going on somewhere which I can configure away.

btw, I just pushed some updates including improvements to how [monome] objects handle device connection and hotplugging, and a simple arc example.

After some fiddling, I was able to get this up and running. Very, very cool!

Defintely worth a new thread IMO.

For me, this is the missing link between rpi+pisound+pd+automationism+grid. Thank you for putting this out there @barnaby !

Glad you like it! Out of interest, what fiddling was necessary? Part of my goal with this library is to optimise the “first 30 minutes of pd+grid” experience, so I want to know about any roadblocks people run into, no matter how trivial.

I had to downgrade serialosc

SerialOSC 1.4.3 on windows not compatible with monome 64 walnut edition

after some time trying to connect my monome 64 walnut edition to my windows PC u…sing the latest serialOSC release from github with no success (either zero communication or the communication was messed up, I uninstalled it and installed the previous version 1.4.2-pre and it worked flawlessly. tested using maxMSP 8 running grid-test.maxpat from the monome package with serial monitor. a screenshot of the serial monitor is included ![serialmonitor](https://user-images.githubusercontent.com/16099871/145089310-091a7ecd-55f2-47d7-992f-f7efcdeb26f9.png)

Have you looked at the Max Monome-Home patch? The edit mode there is very well documented (see below for potentially relevant info)

this bit might be important to the prefix situation?

FWIW - I can’t make this work with my neotrellis grid. Most likelt because of the prefix thing - but I don’t understand where that is in the pd code.

EDIT: I seem to get “example” as the prefix (when I look in Max it’s the same)

Also FWIW - you should be able to use /sys/size x y to get the grid size and not have to worry about specifying 64/128. 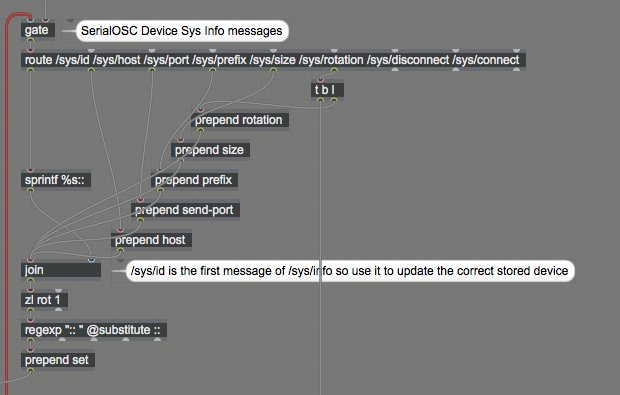 This is really cool, I need to test it a bit more on linux but key presses worked fine. For some reason led messages weren’t landing on my grid. Some older PD apps I have work fine with grid so it’s probably something on my end with recreating the patch, I’ll let you know if I end up sorting it out.

Followup on testing with my neotrellis gird (on MacOS).

I can get the test patch to connect and work with my grid if I do the following:

At which point things work and I get the following from list devices:

Is there a good way to set/send just the the prefix part of that oscformat box? for the moment I added the following at the top of monome.pd

EDIT:
Curiously - the prefix for the same grid on linux (Raspberry Pi with most recent SerialOSC) shows up as prefix /monome. It took a bunch of poking at the patches + disconnecting/connecting the grid a bunch of times before it would consistently show up.