Did you just install? You’ll need to sleep your norns if so. Any script that contains an engine will require a sleep before you can use it.

I actually sleep it but it doesn’t work. I’ll try again !

When you launch your norns, can you visit http://norns.local and you should see two tabs in the bottom right labeled “matron” and “sc”, with “matron” selected by default. Then, try to launch Pedalboard. When it fails, you should see a bunch of text show up in that matron tab the web browser. Could you send that text to me? Either via DM or here in the thread

Other things that others have run into:

Finally I’ve had a chance to give this a go, and it’s really well done. Great UI and great sounding, thanks @21echoes! Here’s some 0-coast, sequenced by 0-ctrl into Rings/Clouds:

Would be cool to see an open feedback loop in mono mode, with an ‘out’ pedal and an ‘in’ pedal that can be placed anywhere in the chain using the right channel for sends. Excellent work here!

just wanted to echo this sentiment from the Changes script thread:

would be really fun to use 8 lfos on rings/clouds

LFOs and Envelope Followers still on the roadmap! Other than a quick relapse to make Samsara, I’ve taken a bit of a break from norns coding to focus on some volunteer work, meditation, and family. I’ll be back at it before long, don’t worry!

how about this to boost the gain for electric passive guitar ?https://m.thomann.de/fr/vox_amplug_2_ac30.htm?glp=1&gclid=EAIaIQobChMIrL7i_Ja36gIVmKSyCh1iOwoGEAQYASABEgJ37fD_BwE

I’m having trouble loading the versions of Clouds and Rings. When I try, I’m prompted to download additional content and restart but when I do, they are still greyed out. Any ideas anyone?

installing the ugens on the latest norns update works, but it gets stuck in the loading screen (you have to manually reset in the norns menu, but then you can see the granular and resonator units as accessible). trace back:

I’m unable to reproduce. Want to take to DM?

Would love to hear any UI thoughts you had

Oh dear, that sure were a couple of really busy months.
But I’m still thinking about those LFOs and Envelope Followers. One idea could be to have an audio pedalboard and a modulation pedalboard. Like to sides of the same thing. The modulation board could be a page like the overview page (where you see all the pedals in the chain) and you’d reach it with E1. It could be above the overview page. It could be a fixed thing, like 1 env follower and two LFOs or something like this or user configurable like the pedalboard.
The next question is: how do you assign modulation and tweak the mod amount?
A possible solution could be to add a small lane below the knobs with a box to select the mod source and a slider to determine the amount.
I’d need to make some mockups to show you what I mean though.

There is the risk of making things too complex and hard to follow. Right now I feel like this has a nice balance between features and usability, where you’re never getting lost. Although I do wish for more parameters on the same page sometimes.

I also have a little feedback on the main screen. Right now you need to use combos to access the pedal’s D/W and bypass control. It seems to me though that these two things should be more easily accessible, while swapping pedals could be a combo.
K3 could bypass the FX and E3 could tweak D/W, while K2+E3 could change pedal.
Of course this will then create a little inconsistency in the UI between adding a new pedal and then changing it again.

I’ve been kicking around this idea of a pin-matrix based script inspired by Giorgio Sancristoforo’s Fantastic Voyage, which has an interface like this: 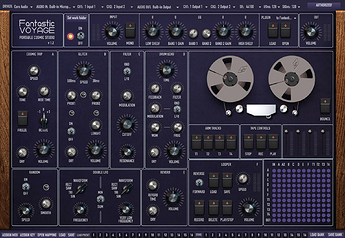 Basically it’s 6 effect modules, 2 modulators with fixed routings (delay time & filter cutoff, choice of LFO or Random for each, no mixing available). Everything goes in and out of the pin matrix so that you can have the modules in series or parallel, arbitrarily sending them to/from a “tape machine” and/or the output. It becomes a fairly simple-to-use but wide pallet of tools because of the pin matrix. (Basically, I plan to make something similar to this, possibly borrowing a couple key pedals [limiting the choice] and basing the UI around a pin matrix).

BUT, I’m of course not suggesting limiting pedal choices, that would seem to be against the point of this script

After reading @papernoise 's suggestions above it sort made me think this pin matrix idea could be used as a page to route modulation.

Hard to imagine this sort of thing working very well in a situation where you want to be able to send modulation to multiple destinations of a single pedal—this sort of calls for a single “knob” per pedal to be under modulation. Maybe you could select modulation destinations individually as “slots 1-6” rather than “pedals”, but it could become quite confusing and difficult to remember what you’re doing in that case… One can imagine a similar norns script that’s just 6 modulation inputs for clouds… Anyways, I hope this is somehow helpful and idea spurning! I’m not a UI designer or Lua coder, so thank you for indulging me in a long post that maybe belongs in “norns ideas” more than here

I’d need to make some mockups to show you what I mean though.

Here’s a very rough rendering of what I meant above. 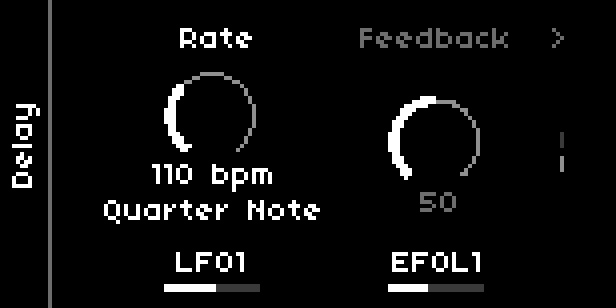 This would of course limit the available modulations to one per parameter and it would indeed – as @renegog suggested above – make it a bit hard to backtrace what is all being modulated by what, since you basically have to go through all the pages to do that.
But it would place the modulation assignment right where you would need it.

I do btw. really like the matrix idea. Big fan of Synthi-style modulation matrices. I don’t see the inherent problem with routing multiple sources to multiple destinations with it, actually that’s one of the things where mod matrices have an edge. Reaper and – IIRC also Ardour – use matrices for routing.
Where they do pose some challenges is when you don’t have a fixed amount of sources and destinations to start with and when the screen real estate is limited. In theory you can scale the matrix dynamically as more destinations are being added, as Reaper does, but the norns screen is only that big. And then there’s the problem that a matrix does make it hard to add per-destination modulation amount settings. Though of course one could make every pin a small fly-out knob or slider and find a way to diplay the current modulation amount.

Sorry if this has been asked a million times – can I just plug from Norns straight into my amp?

Yes-ish! Norns operates at “line level”, which is decently loud. This means it expects loud inputs, and outputs a loud signal.

If you’re going from an “instrument level” source (e.g., a guitar) straight into norns, you’ll likely want to have something boost the volume in between the instrument and norns (e.g., a boost pedal). Pedalboard has an input gain setting, but that happens after analog-to-digital conversion, meaning that it can add a bit of unwanted digital noise.

If you’re going from norns into an amp that’s expecting an “instrument level” signal, then you’ll probably want to turn it down (either norns’ output volume, or the amp’s input volume). Hopefully that makes sense!

LFOs and Envelope Followers still on the roadmap! Other than a quick relapse to make Samsara , I’ve taken a bit of a break from norns coding to focus on some volunteer work, meditation, and family. I’ll be back at it before long, don’t worry!

This break ended up being longer than I expected, especially as I started a new job and worked on my first solo album. No promises on when I’ll be able to tackle LFOs or Envelope Followers, but I appreciate everyone’s patience

Okay, I did finally have some time to try this out! Thanks to @Justmat’s wonderful hnds, it didn’t take much time at all once I gave up on trying to do it in SuperCollider and did it in Lua instead

: This release is LFO’s only, but hopefully I can add Envelope Followers later somehow? (doing it in Lua will probably make that very hard, but maybe I can try doing it in SuperCollider again)

The Mod Matrix lives on the last page (reachable by scrolling E1). The first few sections control the LFOs themselves, then there’s a section per active pedal, with a row per pedal control, with three columns: one for each LFO. Not all controls are listed there, but almost all of them are!

i think the amp polls could handle it on the lua end ?