No restrictions on length or content. I’d like lossless recordings ideally paired with a photo of the space where the recording was made, but that’s not a hard requirement.

This will stream on http://phonography.radio.af in a shuffled playlist – displaying appropriate metadata and a photo when available.

The stream is up now just looping one recording I made in college: http://phonography.radio.af/stream/

DM me or contact me at erik@hecanjog.com or reply to this thread or whatever works!

Edit: I changed the topic so we can post other streams we’ve found as well!

Sounds great! I’ll sort through my field recordings and will drop you a line

I set up the “now playing” functionality this morning – but it’ll get more interesting once there is more than one item in the playlist!

Still need to finish the player styles and add support for image metadata on tracks, as well as an optional HTML blob with info and links about the currently playing recording.

Otherwise I plan to keep this pretty simple! Maybe also a page or section which just lists all the current contributors would be good too?

love this idea! I’ve been making a number of field recordings this year, will sort through and send some along for your consideration.

Got some fantastic submissions from @samarobryn which are going into the playlist tonight! 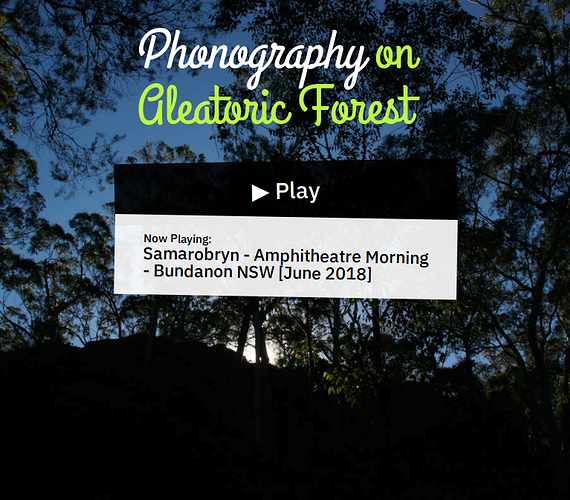 Added some more great submissions to the channel but we still really need lots more if you’d like to contribute!

Fixed up the player and website a bit and started tweeting the recordings as they play here as well: https://twitter.com/AleatoricForest

Awesome, thanks!! These will be up in the stream probably before the weekend.

Here’s a live stream of a hydrophone field recording that my brother just launched today: https://brackish.co.uk/

Wanted to share as the subjects are kind of close.

It’s a pretty musical place to listen to. Absolute heaviosity when the ferry comes in! Amazing power drones.

"A single hydrophone placed within a fishing creel (functioning both as protective enclosure and microphone shock mount) records the daily activity of a sea loch adjacent to the port of Lochmaddy on the island of North Uist.

The microphone is strategically located behind the small island of Eilean Casaig at a confluence of edge habitats between the industrial port, connecting marine traffic to the Minch, and the tidal sea lochs which extend into uninhabited natural lands. Among the tidal ebb and flow of currents anthropogenic sounds of seaweed harvesting, ferry traffic, and fishing boats compete with natural sounds of the marine habitat of the bay."

Wow! This is so so cool, thanks for sharing it.

I’ve been looking for other phonography streams to collect ideas for where to take this one, and just find stuff to listen to because I like to listen.

It’s really nice to open these up all at once. Here’s some more I found recently:

A responsive radio stream using the huge catalog of field recordings collected for the aporee sound map project – responsive in that it does stuff like try to find local recordings when listeners tune in, pushes new uploads to the top of the queue and other things.

A live feed (I think it’s live?) of a marsh in Saturna Island, British Columbia – part of the Wetland Project

The Locus Sonus soundmap project which has a map of a bunch of live mics – streams of locations around the world right now.

Hi! I just soft-launched the first insurgent procedural phonography project on http://phonography.radio.af. The system runs continuously in the background producing renders using the corpus of available field recordings from the channel as input, injecting them now & then into the stream.

I also put a couple example renders (the first two that were generated on the streaming server when I set it up initially) up on bandcamp:

I’m working on some simple procedural image generation to display on the website while each render plays (some field recordings have photos associated with them, the rest have spectrographs which I will use as inputs for the synthesized image) and I’m still not sure how often the reworked recordings should be injected into the stream, and if they should just be inserted into the playlist or mixed on top of the field recordings, or something else?

I’m still collecting field recording submissions for the stream (which will become part of the corpus which get reworked) and hope for this procedural system to be just the first among many.

Some polishing up still to do before a “proper” launch next month but I just wanted to share this here & say thanks again to everyone who has contributed recordings so far!