First prototype of trying to capture the sound from the kite.
Next I will try with piano wire. NOT A GOOD IDEA, Its dangerous. 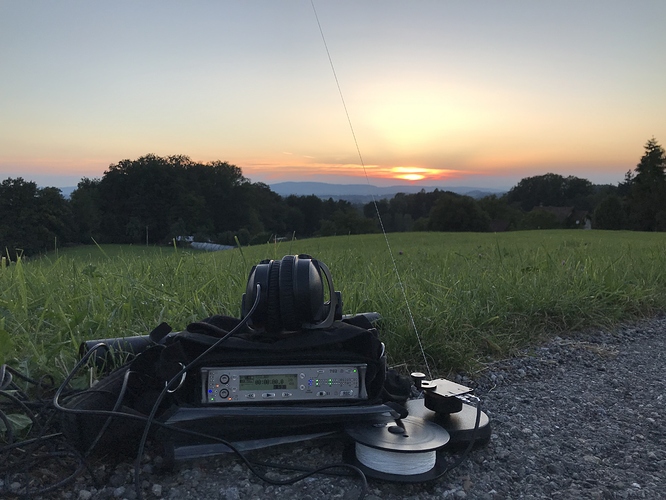 Are you capturing sound from a mic up there or vibrations of the string?

At the moment the vibrations from the string using a transducer speaker. I am more messing around doing “silly” tests and see if it can lead somewhere.
Mic (contact mic) on the kite could be fun as well.

Ahh, I admire his work so much.

Changes was the base script- at this point it’s something else entirely that will only be useful with Volante.

Going to see what I can put together with this setup for a few weeks. I’ve got the CV.OCD set up to do 4 channels of sequencing and send record and erase triggers out to the Lubadh which is working really well. Also taking a bunch of time to capture multi-sample sets into the Digitakt. I did my guitar and kalimba this weekend and today I’m going to work on sampling my mountain dulcimer and random stuff from around the house. 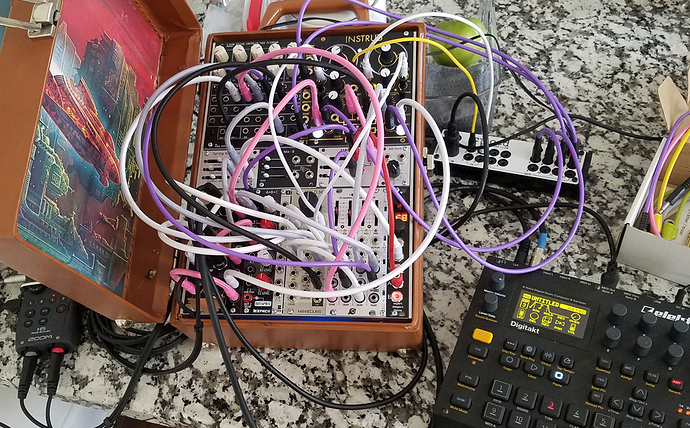 Snippet from this weekend:

(warning: not a picture)…

My 3 year old daughter walked in just now and started pushing buttons on my Akai APC, which was turned off.

Her: What is this?
Me: It’s for my computer.
Her: It has buttons on it?
Me: Yes, lots of buttons.
Her: But where are your triangle and circle buttons?
Me: …
Her: Maybe someone came and took them…
Me: Maybe so?
Her: Are you going to be all sad now? 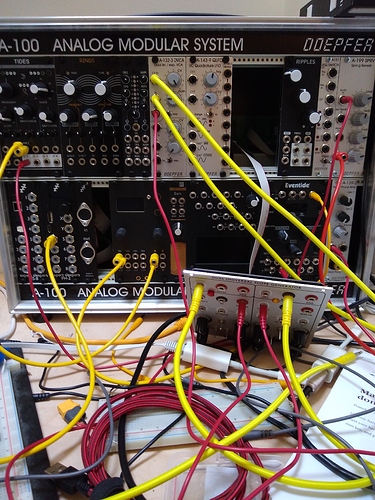 Ok I think we need to have a chat about ergonomics.

It’s easier to patch the modules when they’re hanging out of your case – you can use shorter patch cables that way!

I’ve started setting up drones while I work. This is the latest Palette configuration for that purpose. It’s delightful.

All the Nonlinearcircuit modules are freshly built by me, which makes me love them that much more. 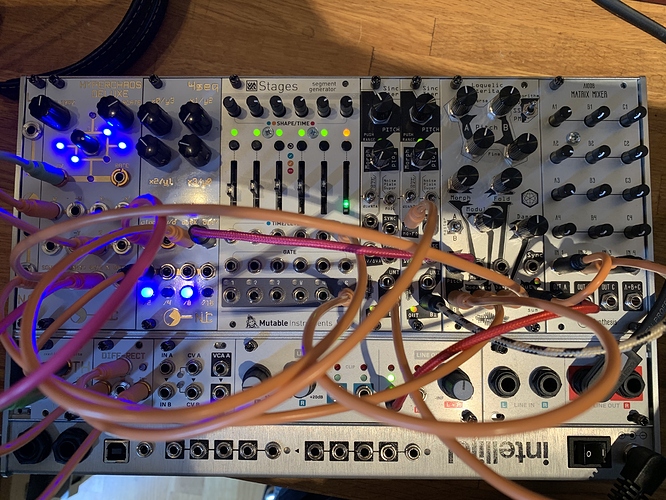 Please share some of them if you haven’t already. Work drones for us drone workers.

Sure thing. I seldom stream them on Twitch and slightly more often upload stuff to YouTube

Well done. I have built those two 1U NLC modules and the 1U signum to switch between sloth outputs. Such fun builds. Great choice!

Thanks! Listening on the latter now. 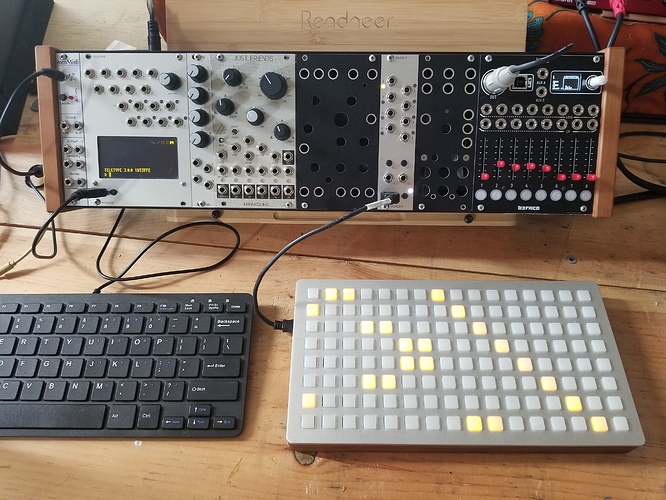 About a year ago I started to dissolve my eurorack set-up in favor for synths equipped with MIDI, but I didn’t want to loose the polyphasic sequencing / modulation I love to make with these tools… so I finally got this Befaco VCMC module to try and figure out how to have my cake and eat it, too. The main genesis of this idea is to capture moments of rhythmic juxtaposition these tools do so well into an Elektron sequencer (Analog Rytm) where I can compose with them over time in a more solidified state.

Two major challenges thus far have been tuning and clocking. Ansible’s CV outputs are notably sloppy which resulted in jittery semitones in the conversion to MIDI notes. Thankfully the advanced tuning table @csboling coded into Kria allowed me to set each semitone to the appropriate voltage and since then I’ve not come across tuning errors due to Ansible’s CV out (seriously Sam, the amount of work you’ve put into this app/module has been amazing, thank you so much).

But the bigger issue is clocking. My hope was that I could send a 24ppqn MIDI clock into Teletype, then script divisions and swing to be passed onto Ansible or directly from Teletype to the VCMC. However, this is not working out as intended for reasons I should have realized before even trying: the overall time delay in the MIDI -> CV -> MIDI conversion.

Even if I reset clocks and the sync counters in Teletype with the Run/Stop message coming from the mmMIDI module, I’m getting 90-100ms of delay between hitting start on the Analog Rytm and where the trigs end up being recorded. This is a rough estimate calculation based on noting the microtiming offset of the recorded results. This isn’t terrible for recording a quantized sequence because all notes are recorded one step later than they should be, which is easily remedied with something like the Elektron sequencer; but it throws my hopes of scripting swing patterns out of the picture with this particular signal flow. Tomorrow I’m going to try using the Teletype as the leader clock to see if I get more accurate results, but recording nuanced swing patterns like this just might be too much to ask for.

It almost feels perverse to be using these tools in this way, but the few moments I’ve captured thus far have felt promising. Aside from just straight sequencing I was also experimenting with sending polyrhythmic modulation from Just Friends to modulate drum parameters on the Rytm which creates some coooool effects.