Playing live without a PA

Wondering what folks like for playing modular music live in a context where there is no PA system. Particularly if going mono is perceived as a bummer.

I have nice recording monitors but have no interest in bringing them out of my room.

I have a nice little Fishman acoustic guitar amp with ok bottom, down to about 58 hz. And a Trace Elliott bass amp with too much hum for comfort.

Any ideas would be helpful.

If you’re talking DIY stuff like house shows, galleries, and other places like that that do events ocassionally, someone involved probably has a PA or knows who to borrow one from. I’d recommend asking the person who runs the “venue” that you’d like to use one if they have one available but could use your amp as a fall-back.

That Fishman (Loudbox Mini, probably?) will work for smaller venues as long as you don’t need a lot of bass. But it’s better if someone else handles sound, the results are almost always better.

I think @jlmitch5 is right: ask if there will be house PA and find out what kind of connection they prefer. Most can use either XLR (via DI, and it’s a good idea to own your own: get at least a Radial ProD2) for common sound reinforcement rigs, or RCA for DJ mixer setups.

I know this is not going to be very helpful… but I find myself being more and more intrugued by the idea of this thing here (the speaker, not the Continuumini… I mean in the context of this discussion):

Depends a lot on the style and level you want to perform you music at of course.
This said, I can only second the suggestion to get your own DI!

Mono is not a bummer.

The videos don’t do it justice. I heard it played in the large auditorium in FEZ at Superbooth this year, and was very impressed.

Mono is not a bummer.

Good point: mono is the rule rather than the exception in most PA.

That Haken speaker looks really cool, but I can’t get any sense for the volume it produces from the videos, for obvious reasons. Would love to hear more about it from someone who has seen it in person.

EDIT: and then I saw @GoneCaving’s comment. @GoneCaving is it really fair to compare it to a PA??

No, I don’t think a PA is a fair comparison, but it is certainly louder than you might at first expect, and does sound very good.

Is there no way to get or borrow a PA? They are not the sort of thing that people get rid of and tend to accumulate. Artist studios, venues, ex musicians etc tend to have more than they know what to do with.

In some contexts whatever you can get your hands on is sufficient but there may be an avenue you didn’t realise was available.

I know this is not going to be very helpful… but I find myself being more and more intrugued by the idea of this thing here (the speaker, not the Continuumini… I mean in the context of this discussion):

TBH this was the only thing out of superbooth which got me excited (the speaker). I’m really looking forward to learning more about it in the coming months… I recently connected with a handpan and I’ve been deeply enjoying the ability to go sit outside somewhere and play. The Onde immediately had me thinking about the possibilities of incorporating something like norns along the side… (well that and/or a Continuum)

I had very good results from a pair of baby Genelec 6010’s up on mic stands, on either side of 12U of modular. Surprisingly loud, good bass, stereo, super portable. They don’t make them anymore but there’s probably quite a few options in their current range and other similar small monitors from other suppliers. Can take a little bit of tweaking to get the right sound - they’re very small speakers after all - but if you want stereo and small this might be an option.

Can just see them here: 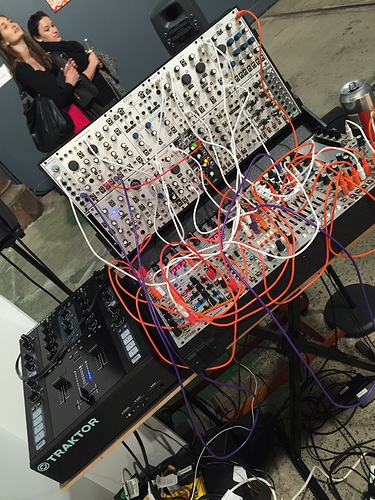 Otherwise another thumbs up for the QSC Kx range. Used a few and they all sound great.

Is there no way to get or borrow a PA? They are not the sort of thing that people get rid of and tend to accumulate. Artist studios, venues, ex musicians etc tend to have more than they know what to do with

I don’t know in your town, but here I know a bunch of sound engineer who also have a PA because they do party/gig service. Another thing we often did is to borrow a PA frim some youthclub institution (not sure what they are called in proper English). Round here we have many publicly funded spaces for kids to go and do stuff so they don’t hang out in the streets. These also often organize - among other things - concerts and sometimes have absurdly huge PAs just sitting there

I have a Roland KC-880, that I can play on top of (decent base for an intellijel 7U) for a quick pop up shows. Loud enough to fill a park or a decent size room. Great/Clear Mids + Highs, wish it had a bit more on the low end.

Have you thought about playing an unplugged set?

Uh… not really… if you’re not just pulling my leg, I’d be curious what that might mean in a n electronic music context…

This isn’t really a general solution, but I’ve played a few shows with a small FM transmitter with a few boomboxes tuned to it in the space (smallish gallery spaces with weird acoustics) and it worked out pretty well!

Cool idea, what FM transmitter are you using?