How do you patch your Plumbutter? A place to give and receive advice. Notes/tips/tricks/recordings are all appreciated.

I’ll lead with an observation/question: on my plumbutter, the red jacks in the smokestack do not produce any kind of voltage. I assume this is normal, and can’t help but note that the first four stages of Double Knot’s shift register are not even exposed. So I’m left wondering: what is the point of those jacks? Do I misunderstand?

Speaking of voltage, I took delivery of a format jumbler today and have spent the past two hours sending various PB jacks to an oscilloscope just to see what the signals look like. I highly recommend doing this-- the various overlapping influences on this device are pretty fascinating.

one thing I feel is missing from PB is a banana input to patch audio in to either the gongues or dogs, so something I’ve used my jumbler for is routing audio around (gongues to dogs etc), with attenuators to “control” feedback.

I also use the jumbler to mix different rollz to the ultrasound (as within PB itself, the rollz are a lot louder than other internal signals going to ultrasound). all pictured below: 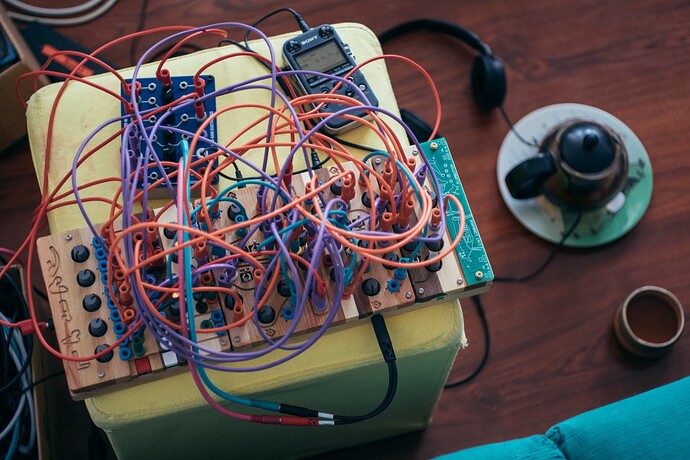 I didn’t really consider ultrasound much when committing to this instrument, but it’s become a very essential part of it for me.

something I’m not doing much with is modulating the vcas in the mixer section.

somehow i’ve been generating stepped modulation and it usually happens when I’m well into intuitive patching but i think it’s via ultrasound? (no it’s not via MWTRS and attenuation)

I’ll lead with an observation/question: on my plumbutter, the red jacks in the smokestack do not produce any kind of voltage.

They do produce voltage, but don’t trigger certain parts of the plumbutter. This is from the bottom of the manual:

Hmmm. I may have an issue then. I’ve got all four connected to DATA right now and I’ve got 0.01 volts coming in.

But they do indeed trigger the gongs! Ha!

This is a great idea! Thanks!

They don’t retrigger and circulate back into the mwrs section. Only the orange ones do.

Speaking of VCA section, I often audio rate modulate there. Audio into one of the ins and CV into the other can generate interesting results sometimes!

Great thread idea btw Matt, I’ll try and give it a shoutout on the next Deerhorn episode.

somehow i’ve been generating stepped modulation and it usually happens when I’m well into intuitive patching but i think it’s via ultrasound? (no it’s not via MWTRS and attenuation)

You can get arpy “stepped” stuff with some combo of yellow outs on ultrasounds modulating avdogs in specifically one of the Gonzo/Trad positions, but I have had a hard time figuring it out with a definitive patch. Basically I think what is happening is the modulation acts as a sync and so the av dog pitch tunes to sub harmonics kind of like the mangrove oscillator.

We were talking about techniques for pitch “sequences” some here and I posted a raw version of what became that track.

thank y’all @lilskullymane and @Justmat I had a lot of fun this evening with both of these techniques (plus some pitching from beads and panning from the warps parasite 2d panner). reminds of barrel on the mangrove oscillator a bit, where the “notes” are like related to harmonics in the pitch I guess?

Also, a favorite technique of mine, which is a well known trick, is to set the antenna knob on deerhorn to be fully cw and patch in an orange from a roll or MWRS to the deerhorn orange and it will cycle between the two notes based on that signal. (EDIT 2: what @samule.edmoon said, also yes to audiorate modulation to the mixer, specifically dust is a favorite of mine!)

Another one that took me a very long time to realize is that the MWRS data input is not just for smoke stack oranges to loop things, but any orange input can act as data. I like to have MWRS be clocked with an even roll white the data input gets an odd role, and dial in the speed so a repeating but non regular gate pattern emerges.

I don’t know how to fluently use this but the last part of what you said is a super cool idea! I’m excited to try this out with the clock divider from my Phenol

Yes that one was from sweetearthflying. Honestly, my biggest plumbutter strategy is watching what he does on ig and what @triangle does on yt haha!

Here’s the @triangle YouTube link if anyone wants to take a browse: 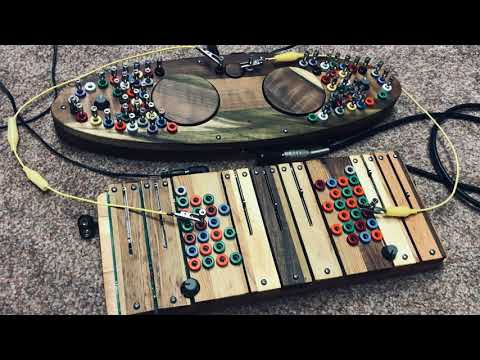 of the three CL instruments i own, i continue to feel like PB is the one that still hasn’t clicked for me. i always feel like PB never responds the way i expect (or would like it to) in terms of rhythm or timbre, whereas coco and sidrax, while they have their surprises, i at least understand them enough to accept their quirks as an enjoyable part of the experience

buuuuut i will say that monitoring PB’s rollz in a multi-channel scope was really enlightening, as i never quite understood what Peter meant by the 3-roll being a “chaotic paradox”. but once i saw what was going on i started to enjoy patching rhythms on PB a lot more. my scope is out of action right now so here’s a crude approximation i made in max to help visualize what i noticed ~

rotating around the four-roll, each output is phase offset 180 degrees from the previous one, meaning that diagonal pairs are “in phase”. of course, the orange output (labeled 1) creates positive triggers/gates, while the brown nodes are negative spikes

now on the other hand, because the three-roll is an odd grouping, the phase offsets don’t line up until a full rotation has been made, meaning a phase offset of 120 degrees occurs between each output 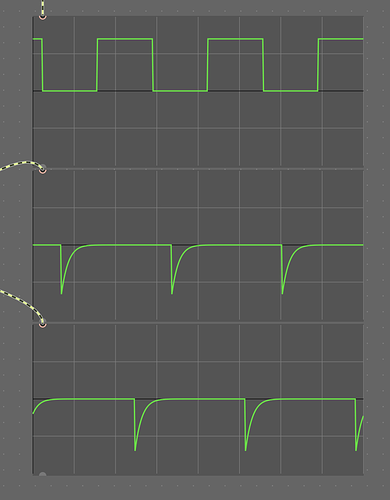 i had initially assumed that the four-roll behaved in this way as well, and perhaps this was the source of some of my previous frustrations. currently i’m really enjoying the three-roll as my rhythm/clock generator, but modulating its verso/inverso inputs with a four-roll and exploring the different results of slower or faster relationships

perhaps this isn’t the biggest or most revolutionary tip on a technical level, but one i really value in the sense that it really increased my enjoyment of using the PB

You can get arpy “stepped” stuff with some combo of yellow outs on ultrasounds modulating avdogs in specifically one of the Gonzo/Trad positions,

basically yeah this was where i think i started - assuming a quantization of some sort happens, patching the ultrasound yellow outs to gongue/dog purple ins.

When connecting to Mordax DATA, do you go through a format jumbler that’s connected to Plumbutter via ground? I don’t get good readings unless I do it that way (I have one of those Low Gain jumblers).

Also, about the stepped pitches @jlmitch5 mentioned, I’d guess it comes from this (using Deerhorn rather than AVDogs):

If you’re patient you can tune the FM inputs on any Plumbutter oscillator to accept CV from other instruments to get pitch sequencing (I haven’t tested the accurancy, it sounds good to me for about 2-3 octaves). I’ve sent pitches (using a jumbler) from KeyStep, Marbles, Hermod, Ansible, and probably more quantized euro stuff and it’s been fun!

For the first few months of owning Plumbutter I repeatedly referenced the tips on Peter’s site, I actually printed out an edited version where I made as much fit on a sheet of A4 as possible

A small tip that I enjoy using is orange outs to modulate/trigger other things. The orange out on each AVDog represents the CV of the “undulation”. AVDogs respond with that unique wave tank behaviour, so if you send signals to the green inputs then trigger or modulate something else like a Gongue with the orange out, you can get really pleasing off kilter rhythms.

Edit: Could be just the output nodes.

I’m very interested! Can you say more about this?

you can then double gate it in the VCA section.

I would love to hear more about this technique @samule.edmoon

The output impedance is low in a current controlled system and high in a voltage controlled one. I think I read it somewhere in the Labrolz papers (section on Arp-Serge ass) on the CL site and also from Pugix. So monitoring the voltage of those outputs may not tell the whole story.

Although I see the PB inputs are said to be CV inputs.

Thanks! I’ve got a few other arpy things I’ve recorded. I’ll look around for them and share this evening

Maybe not a profound tip, but if you don’t have or want to have a format jumbler, in discussion with Andrew who made the Phenol, for grounding to cross patch, if you are running any audio cable (active or just as a dummy cable) between you banana gear and say eurorack or whatever, that creates your ground connection. So if you are sending audio from your euro into your plumbutter to process they are them grounded and you can just use ⅛" to banana cables to cross patch freely. I built some of my own cables and have patched between the two with no issues, clocked the MWRS well from Tempi.