i think im going to replace my mpc 2000 with this. im currently using renoise to sequence all my gear right now anyways and i think this thing is beautiful. going to keep my gear to tracker, my emu e64000, and the model:cycles. perfect little setup for techno. really excited about using tracker live with the random fill function. like a little turing machine for any notes or automation on any track!

Call me crazy, but the sequencer end of things is not first on the list of what I like about this box. It’s the sampling/wavetable/loop UI. I love seeing the waveform big like that and all the functionality of how you record/chop/edit/file management.

Yes, there are limitations: mono, 2 minute max in RAM, no realtime preview of destructive file effects, etc. But the sampling interface seems so much more user friendly for a variety of reasons compared to the Deluge or Blackbox.

Given my experience with the Deluge and Polyend’s own Medusa and apparently every other piece of new gear these days, it feels like it’s only a matter of time until certain shortcomings are remedied by a firmware update.

The tipping point for me will be:
a) Overcoming the 2 minute RAM limitations by switching to read the files directly off the SD card. Deluge had a similar limitation when it was first released and it took them roughly a year to figure out how to do that, so fingers crossed Polyend can figure it out too.
b) External MIDI control of the “instruments” and their parameters, this way I can use other sequencers (in addition it’s tracker) to control it’s sample/synth engine. Props to the Deluge for allowing that.

That way it becomes a capable sampler instrument (admittedly with a beat orientation) that also has this crazy detailed, flexible sequencer. I could even live with the mono files.

Ultimately, I have my ER-301 micro system for all the more wacky sample destruction, multi-grain granular, long form stereo files, asynchronous looping/playback. Excited at the idea of having having a narrowly focused box for beats and chopping samples plus a wavetable synth.

I agree with this! One thing I’ll add though, is it does have 2 way midi and I think they mention running the synth engines from external gear… I could be wrong, but I saw that at one point.

For me, this will be the box around the house that I use away from the computer. I like Renoise and have been getting more comfortable with it. I have also been sending midi from Renoise in to ableton and then out through my crow to create a NerdSeq style function. This has been a lot of fun! But when I’m in my apartment, the kid is asleep and I have my laptop, OP-1 and OP-Z available to me, I just am a little less enthused. I would love a simple, dedicated box to do my sequencing with… But, who knows!

Another valuable thing to what you mention in regards to firmware updates would be increasing the number of grains from the granular.

That’s a cool implementation. Is it receiving the audio signal from whatever is mounted in the case?

Using a transducer is a good way to get variable frequency, since most of the shakers that are in our mobile devices have a fixed resonance peak and are pretty useless for providing sufficiently musical feedback. 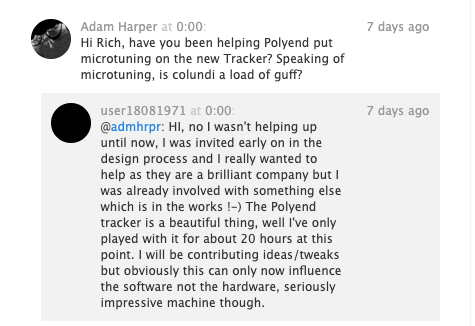 Looks like Mr. RDJ himself will be contributing ideas/tweaks to the software (this was on his soundcloud)

Filling out the Characters more …

And b) what the hell he could be working on!!

The device looks sick, but I’m not sure if the workflow interests me…

What I find intriguing is how cool would it be if it had some sort of user mode, where you could run your own software on it. The hardware looks really nice with the display and the jog wheel, it’s just a shame that were limited to this specific workflow.

Knowing Polyend I wouldn’t be surprised if it were kind of easily hackable. But then it’d be a considerable amount of work to make thoughtful use of such a big screen + intricate interface in a usable way that justifies it. I’m fine with this device being what it is even if it’s niche. No one’s asking Digitakt to be open ended (that I know of). This thing, to me, seems like a direct alternative to a digitakt with a very different workflow and that’s pretty great.

I honestly cannot be more excited about this device. I find the tracker style of composing much more inspiring than a piano roll. I’m thrilled for some folks to add or subtract some functionality through some alterations, and it’s inspired me to look at the Polyend Poly2 to work in tandem with it instead of a nerdseq. This is especially more my style because I use a teletype as one of my main sequencers and using the Polyend tracker + teletype seems like an insanely flexible system on a rack.

I recently got a Poly 2 (a day before the shelter-in-place here, which was nice timing). I love it - checks off all the MIDI to CV boxes for me. MPE compatibility; a generous 20 CV outs, 12 of which can be openly configured however you choose; full complement of I/O, including MIDI in, USB host, USB slave, and MIDI out (this can be a nice converter between USB MIDI and DIN MIDI); MIDI CC to CV smoothing, which has worked well for me to get rid of unpleasant aliasing when bringing in LFO and similar data. The best feature though is the screen and on-board UI which allow you to fully configure the module directly from the module itself, and set up presets which you can then load up on the fly. I’m not aware of any other MIDI to CV modules that can do that, and I’ve gotten sick of modules that expect me to work out a configuration on the computer and then stick with that setup indefinitely. Maybe that’s how some people work, but not me. Every session with my modular brings a new use case or idea for how I want to route MIDI, and the Poly 2 is a joy to use because it’s a swiss army knife that can reconfigure as fast as my brain does, in the middle of a session. It’s also one of the prettiest modules in my rack, which simultaneously doesn’t matter at all and matters a lot.

So all that is to say that I’m highly impressed with Polyend’s design choices and very thoughtful interfaces. I don’t ordinarily do preorders, but they’ve earned my trust and excitement. They’re also a company based in Olszytn, very close to where my wife grew up in northeastern Poland, and I laugh thinking about her somewhat rural and remote surroundings being a location for cutting edge and avant garde music/tech/programming/cool. It wouldn’t make anyone’s top 5 cities in Poland for this kind of activity (but maybe it’s there, just under the radar?). I feel like it’s a good cause to support these weirdos who don’t live in any kind of tech or music hub yet are quickly ending up on par with or exceeding the Elektrons of the world.

Glad to know I’ve been eying the right gear!

Hi, new to the forum - might aswell start with a question

You can use tracker with poly 2? I have been looking at the nerdseq for a while aswell and this would abolutely be an option, but I haven’t been able to find a source to confirm that this actually works.

My main reference point was a response Polyend gave to a question on their Instagram. Someone asked if the Tracker would have CV out; Polyend’s response was a link to the Poly2

The Poly2 is a really capable device. Between the TRS midi in/out you can most likely attach the Tracker.

You won’t have AS much CV capability as the nerdseq though. Nerdseq can do CV sampling, as well as receive triggers for forwarding steps/incoming clock and more. But, with the Polyend tracker/Poly2 combo you will have the opportunity of connecting multiple Midi devices at once, running the Tracker as an audio source and a CV source as well. For the falling and rising edge aspects that come with a Nerdseq, I’ve also got a teletype, so that closes the loop for me on the need.

But, honestly, it would be very strange for Polyend to develop the Tracker and the Poly2 and not have some basic interplay between the two. I would be surprised if they actually don’t add some extra functionality as a pair!

Interesting! Poly2 has kind of flown beneath my radar, but this really piqued my curiosity. Nerdseqs are really powerful in a lot of ways, but for me personally I would love something that both ties into my modular, but is also fun and usable on its own - looks like tracker + poly2 might be a perfect solution to this problem!

That’s what I was thinking! I can use the Tracker away from the rack. I can use the Poly2 with my computer, VCV Rack and other Midi devices. I can use both of them together. Seems kind of like a match made in heaven… as much as I LOVE and want the nerdseq

I guess the simple truth is there is not perfect device and we must make concessions. This combo seems like the most flexible and viable for my method of working.

You can use any midi device with poly to translate midi output into CV.