I agree but I really want to know for sure. I enjoy trackers and if it has a rechargeable battery I may just have to order one!

(@bennjordan) on Instagram: “I’m so riled to be beta testing and feature-tweaking this beast. This will be an absolute game…”

This video appears to have a charge cable plugged in to the top left corner.

I know, haha. I told myself I would chill on buying new stuff during this COVID garbage but I am struggling already. 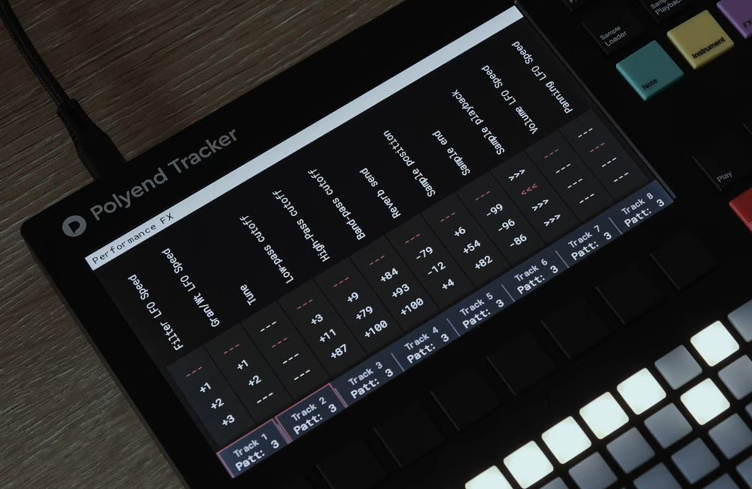 So, with 8 tracks, one could theoretically do chords pretty easily, but it could be really limiting. I wonder if there is a simple chord method, besides sampling of course) to get multi note stab without using half your available note inputs per line.

Awesome, the inside scoop! They still have the haptic vibe going on.

In renoise each track has the ability to add additional note lanes. I imagine this tracker would have this feature integrated.

I hope so! I knew that about Renoise, but there were some hints that the tracks had 2 dedicated param lanes, with an inability to add more. Hopefully that is a limitation of the launch firmware, and that’ll get expanded over time. From the promo videos I’ve seen, it’s been hard to tell about the notes though.

Watched the promo video up top again and see two example of at least having two note lanes. Each note has 2 param lanes:

Obviously I’m excited, cause I can’t stop trying to grok all this thing does!

Sorry, late to the party, so my questions may answered yet…i´m very excited about this thing, longtime user of soundtracker on the amiga and milkytracker on osx.

thanks a lot if anyone knows anything!

Looks awesome. Does anyone know if it has CV out?

For those that want to ask some questions

A review of Tracker by Polyend is coming soon, and all your questions will be answered. But for that, you've got to ask them - ask below... answers in the vi...

Has there been an announcement on price for this yet?

a friend asked directly to Polyend and they said between Euro 499 and 599. If that’s correct I think I’ll buy it.

It appears to have a wave shaper and an FM synth. I’m guessing it has other options as well, considering Ployend’s experience building the Medusa!

Wait what ? If that’s correct that’s borderline insane for the possibilities this offer ! Damn they just want me to spend euros I don’t have :’(

I was thinking the same but would be borderline crazy for that price. I’m basically already all in on this device, but at this price? I’d keep just about all my equipment in the process.

I won’t get my hopes up though. I’ve spent more on spare parts for a freaking mechanical keyboard. A midi machine with a grid, screen, mechanical buttons and all those mechanical keys (not to mention sound IO and midi) can’t possibly be that price!

I must admit I’m confused, my understanding right now is at 800€ this is already a hit. It enters in direct competition with devices like MPC Live, Digitakt, etc. so 800€ would be around those tools, except with an incredible amount of screen space, a very clear choice on the layout, a lot of clever tricks… I’m at loss, this is quite incredible. (Look at me ! Trying to do something else on this forum than rant about Coronavirus, I’m proud of myself, end of parenthesis).

Hey man, I’m right there with you. It would be bizarre. I don’t really know what the correct pricing for these in Europe would be (me and my American center of the universe mind). But if I can get this thing for under $700 I’d be baffled.

To be fair, screens have become a pretty cheap item in this modern era, and Polyend has a TON of experience with all the necessary tools to help cut costs, from the keys and grid they’ve already developed, to the Medusa’s synth engines, to all the midi protocol they mastered for the Poly 2. There’s a lot of RnD they’ve handled. But it would pricing themselves so low!

Then again, this kinda thing has happened before with the increase of price over the years of the OP-1. Who knows.

And listen, if you wanna talk something other than coronavirus (again, that’s my job, so I’m happy to NOT talk about it), we can have conversations about video games. More than happy to take a stance on the merits of kitsch in games and how excited I am for DOOM Eternal, Animal Crossing and FFVIIRemake. Hahah