Trying to catch up on lost time, and continually am struggling with the most basic of connections: the new, seemingly-native SerialOSC in Max7.

The issue is as follows: In other applications (I’ve been using Stretta’s latest as reference) the SerialOSC bpatcher seems to already know the prefix it wants to assign (in the case below, the “lpr” prefix is spit out of a simple connection with the monome).

In my application, Mothership, all that comes out of the simple SerialOSC connection with the monome is the prefix “monome” which I am deeply confused about. How do I get it to assign “mtesi”—the prefix used throughout the already-constructed application? Will someone alleviate my misunderstanding?

I bet this is a simple fix, but I have looked through lines and google and have yet to find a way through this. I think, if I am able to get this connection sorted, I will be able to work through the rest of Mothership. The journey of 1000 miles begins with getting SerialOSC to spit out the right prefix, so-to-speak.

Thanks, love, and jolly holidays to all.

follow the Message attached to the leftmost output of the SerialOSC bpatcher.

with LPR it is clearly “sys/prefix /lpr” where the image below, Mothership, says “sys/prefix /monome”—I simply want to reassign the word “monome” to be “mtesi” but can’t see where LPR adjusts that… am I missing something? likely so! 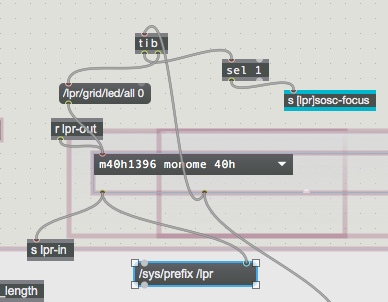 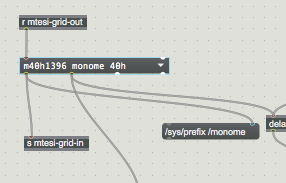 give the serialosc.maxpat bpatcher an argument with the prefix you want to use

tehn, thanks so much !

i am familiar with arguments, but am concerned that i can’t see it within the LPR serialOSC set-up.

from the pic above i see no such arguments and am confused as to where i’d put that?

in between the sosc and the s mtesi-grid-in ?

i suppose i am still failing to grasp how LPR was able to accomplish this without the argument… is that too advanced ?

daeclan, think you should open the inspector for serialosc.maxpat (highlight the object and press cmd-i), then go to argument(s) under the patcher section and edit the argument to /mtesi

you are perfect. totally forgot about this step.

thanks, team ! consider this case cracked.