Placeholder until project goes live. (Updated: I guess I should clarify that the project is now live. Read on.)

Step 1: Familiarize yourself with Bassel Khartabil. This coming Wednesday, March 15, 2017, will mark the fifth anniversary of open-source software engineer Bassel’s March 15, 2012, detention in Syria. It’s been more than a year since anyone has heard from him. Three times in the past the Disquiet Junto has done projects to raise consciousness about his predicament. We did the first one in January 2014, creating a soundscape to go with Bassel’s CGI reproduction of the ancient city of Palmyra:

We did a second one, “Placid Cell,” in March 2015, marking the third anniversary of his incarceration:

And in November 2015 we created audiobook chapters from a book, Cost of Freedom: A Collective Inquiry, written in Bassel’s honor:

Step 2: On January 31, 2014, Bassel wrote to his friend Jon Phillips from the Damascus Central Jail in response to Phillips’ suggestion that people might make a record album inspired by his ongoing incarceration. Bassel replied in part: 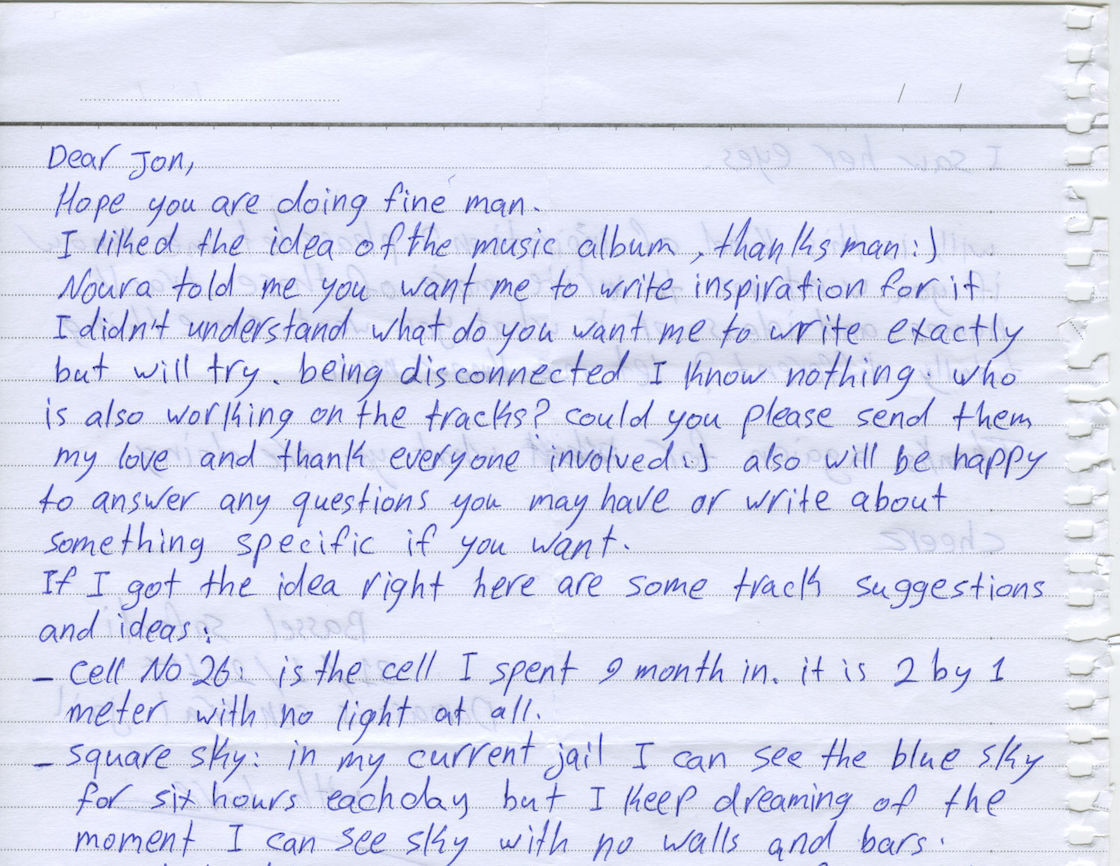 The Noura mentioned in the letter is Bassel’s wife. See the full letter and information about actions to mark the fifth anniversary at:

Step 3: Take that section of a “square sky” to heart, about being able “to see the blue sky for six hours each day.”

Step 4: Create a short piece of music in response to that image, that scenario, that mix of hope amid hopelessness.

Step 1: If you hosting platform allows for tags, be sure to include the project tag “disquiet0271″ (no spaces) in the name of your track. If you’re posting on SoundCloud in particular, this is essential to my locating the tracks and creating a playlist of them.

Step 3: In this discussion thread at llllllll.co please consider posting your track.

Length: The length of the finished piece is up to you. Three to five minutes feels about right.

Title/Tag: When posting your track, please include “disquiet0271″ in the title of the track, and where applicable (on SoundCloud, for example) as a tag.

Download: Please set your track for download and with a license that allows for attributed reworking (i.e., a Creative Commons license permitting non-commercial sharing with attribution). That’s in accordance with the “share alike” aspect of the first stage of this project.

Linking: When posting the track online, please be sure to include this information, as well as the identity of the source track that yours accompanies:

Placeholder until project goes live. (Updated: I guess I should clarify that the project is now live. Read on.)

Image associated with this project is a detail that Bassel Khartabil wrote to Jon Phillips on January 31, 2014, from the Damascus Central Jail. More on Bassell’s detention at freebassel.org. Major thanks to Christopher Adams, Niki Korth, Jon Phillips, and Barry Threw. See the full letter and information about actions to mark the fifth anniversary at:

This project also elicited a vocal from me. I took video and, as usual, added a few filters.

While waiting for the video to render, it occurred to me to try adding the vocal to a piece I recorded using the drums from the recent duet project.

Anyway, It’s a cell block-rocking beat and then I added bass and now ukulele with pitched down vocals. Download it here.

Edit: I’ve settled on using the mash-up version as the vocals seemed naked.

Bit more reflection and lyrics on my blog, cheers.

Hello Junto,
Two Square Metres(disquiet0271)
This is a sad and depressing prompt and my sympathies to family and friends of Bassel Khartabil. This piece is just a personal sketch of how surrounding darkness feels to me and in no way proposes I understand his feelings and fears. I hope his story has a happy ending. https://soundcloud.com/user-651760074/two-square-metresdisquiet0271

Hi Folks,
So here’s my piece - something more acoustic from me this time. I feel it’s hopeful, despite it’s slightly lonely, melancholic air. Whenever I hear again about Bassel’s story it makes think again about the amazing strength of character he and so many other human beings held captive around the world must have. I cannot imagine how I would cope under such circumstances. My deepest sympathies to both him and his family.

Full descriptions of the software instruments I used are in the Soundcloud description.

Here is my contribution. (see SC page for full description)

I first made a drone, then played synth, then added my voice with pitch shifter and reverb in the background, then mixed. Free Bassel!

nice one, I love the smooth repetitive motive and moody synths

I split my track ‘square sky’ into 24 bars (hours)… most of the track is fairly dark / ominous / oppressive, but there’s a 6 bar section in the middle where the brighter blue sky appears… only to vanish back into darkness again.

While making the track, it made me appreciate the freedom to express ideas without being oppressed or unfairly incarcerated. My thoughts are with Bassel and all the others around the world in similar situations.

Here my track, just finished.
https://soundcloud.com/daniel-diaz/bassels-square-sky-disquiet0271
I wasn’t familiar with his story so it’s good to be informed.
The bitter-sweet feelings of Bassel contemplating that square blue sky through his jail window is expressed by the contrast between sweet classical music and dissonant electronica and sytnhs. I also performed some noisy bowed upright bass here.
I took Beethoven’s 9th Symphony, the proto-joyful classical piece par excellence (here it’s 3rd moment thought, not the happy, almost maniac 4th with it’s Ode To Joy) ad inserted that in a Bb dissonant chord that goes from cluster abstraction to Beethovens BbMaj7 and back to the dissonance. I followed Beethoven’s harmonies in the middle section with my synthesisers.

Some crickelsounds from sand,stones, a fan,recorded with IPAD “Samplr”, my PRS through BLUESKY Pedal, so the light comes in the dark.

Blue square every where! Free or not … Send Blue Square Childs in climate of struggle!

The request this week is a piece to remember Bassel Khartabil, a Palestinian Syrian open-source software developer who has been in captivity since 2012, and whose whereabouts are currently unknown.

The piece was originally going to be a dance but as I started writing it turned itself into a fugue (I am breaking a number of rules here but that is the best description I can offer).

The piece is scored for Saxophone Quartet (soprano, alto, tenor and baritone) and Bass Clarinet, and the score is available at bit.ly/2mrqqeR.

The playlist is now up and running, 14 musicians so far: