okay, so i have an issue where any program changes sent through a multiclock are “doubled” to any of the 4 clocks. this is causing my bim delay to automatically reset to program change 1.

so i was curious if i could program the event processor plus to ignore the 2nd program change that is sent (or every even numbered program change it receives). i tried programming it through tiggering midi events, defining a sequence, and filtering on/off the program change, but i’m doing something wrong.

i essentially just want it to toggle back and forth in receiving/ignoring program changes on channel 12.

if you have experience in programming the event processor, and could help, please reach out!

i included pics of both my midi routing setup and the output using a midi monitor…it was only whenever midi went through the input of the multiclock to its output that program changes were doubled, CCs, notes, etc were not doubled. 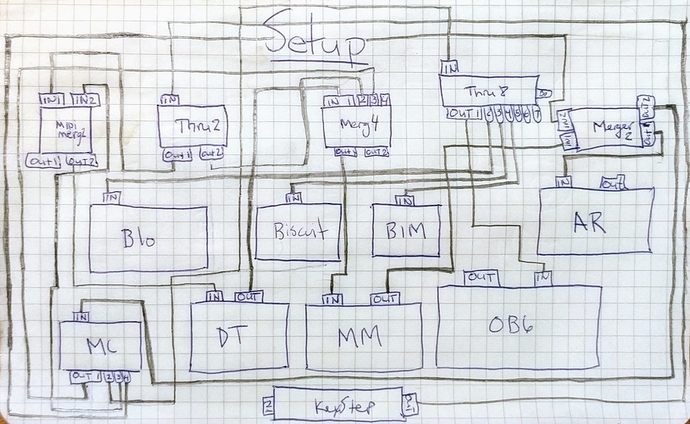 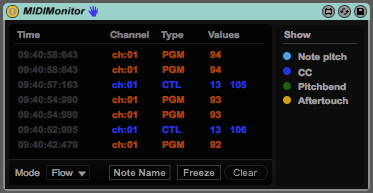 ps here’s the manual for the event processor, http://www.midisolutions.com/MIDI%20Solutions%20Pedal%20Controller.pdf

okay, so the multiclock is definitely spitting out doubled program changes. i had already reached out to e-rm about something else and they provided me with vers 1.07 of the firmware…so i tried both v1.06 and 1.07, and i had the same results.

in any case, i also sent an email to midi solutions and they responded with an answer to ignoring redundant program changes…and funny enough, it’s one of the program examples for the EPP.

one final note…i was having issues with the Digitakt responding to program changes (pattern changes) from the monomachine, and now i know why.

i’m loving the multiclock, i just really hope they’re able to iron out those issues.

heard back from e-rm and they confirmed the issue / sent me an updated firmware that i’ll try tonight.