do you think DC offset would be a problem though? i imagine this will likely be used at the end of a chain with a filter in there somewhere that should remove any DC from audio signal.

what i like about it being DC coupled is that it benefits from the beautiful simplicity of the concept as well, having 2 modulation sources that mix from 7 others where you control how much of it goes to each channel simply by repatching into a different input. that and the fact that it would pair so well with just friends in envelope or LFO mode…

i do agree though that if it makes it work less well for audio signals then maybe it’s not worth it, or maybe it could be a switch on the back or 2 different versions, one for AC and one for DC.

I think priority should remain audio mix/panning… that is what made the original module and the design idea so appealing!

Certainly a CV version of the module can be also designed and made, as it’s own thing…

But what I really like about the original idea is it’s minimal elegance.
Dare I say: very much feeling like something that effortlessly fits in the monome universe.

Following this with great interest!
I planned to build an euro Mid/Side encoder this afternoon, (Worng LRMSMSLR), your panning mixer would be a perfect match!

Personally i’d also prefer it to remain an audio mixer, with constant-power panning.

Then of course the ideal would be to have a PCB that could accommodate both constant-power & constant-voltage panning, and the builder could chose to build it for audio or CVs, but I have no idea if this is possible (?).
Having a jumper on the back that switch to one or another (bypassing AC-coupling caps when using constant-voltage), would be cool too, though I’m not sur it’s worth the trouble (can’t really imagine how i’d use it with DC signals…).

Edit: Sorry, i just saw that scanner_darkly suggested it already.

What I will say, however, is that once I’m happy with the design, I’ll open-source it, simple as it may be. Happy for anyone to adapt it to their own needs.

How are things going with this guy? Planning on releasing and/or open-sourcing any time soon? I’m speaking primarily based on my own greed of wanting a few in my rack - but I’m sure others have been wondering as well.

Thanks again for the cool idea and sharing your thoughts and progress!

Planning on releasing and/or open-sourcing any time soon? 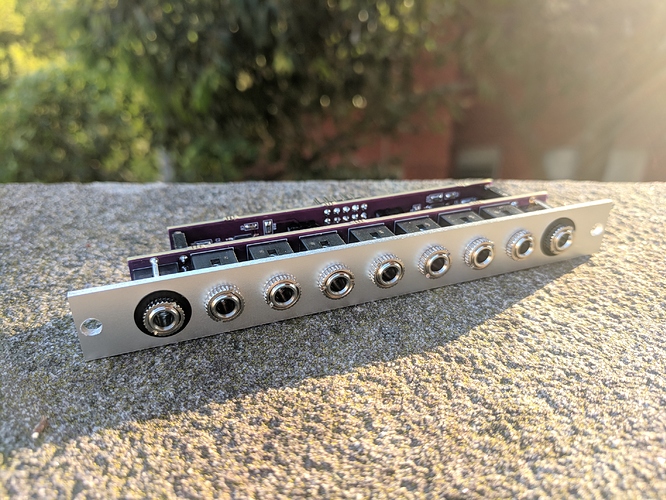 The design can be tweaked indefinitely, but it’s now at a point where I’m happy with it, and am happy to share it.

Most importantly, I’ve moved the output jacks to the opposite ends of the panel, as originally suggested by @laborcamp. I am really happy with this change, and how it strengthens the underlying metaphor: the closer an input is to an output, the greater its influence on it.

Many small tweaks. There are jumpers on the back board to optionally attenuate the mix by 6 dB. The back board is bigger, and some of the components larger, for easier soldering.

The whole thing is of course the pan positions of the inputs. I’ll write more on that later.

If you’re feeling adventurous, you can find the project files on GitHub. You can get boards made wherever you like, but for convenience, here are OSH Park links for the front and back boards. You need one of each.

Cool! It’s gorgeous! Ordered 3 boards to Berlin! (Anyone in Berlin who wants to build this as well?)

If anyone in the UK is building one of these and wants to build another one, drop me a PM.

I might actually be interested to build a few of these, if anyone else is up to get some! Might be worth doing some group order for the board/components as well if people want to do the DIY route.

So awesome! Thanks for all of the hard work and sharing the project so openly! This is a wonderful
addition to the ecosystem. I’m super excited to add a number of them to my cases!!

I’m also planning on building some units and could be convinced to share a few (or more than a few).

I’ll post an interest link after I’ve built the prototype and have formed up my plans.

PS: If anyone is building them, drop me a note as I have no talent in that area.

anyone in the USA planning to order boards and will have a spare set?

Nice work. Any hints on where to order front panels from? Using the .svg on Github.

Wonderful work, thanks much for sharing!

If anybody here in Germany would be so kind to build one for me, please drop me a line!

Hmm having trouble sourcing the 81-GRM21BR61E226ME4L caps. Anyone got any ideas where I can get some from, or suggest alternatives?

Any hints on where to order front panels from? Using the .svg on Github.

I imagine the easiest option for a one-off would be Front Panel Express, and the cheapest to get a 3 or 4 HP blank and drill holes in it.

I have access to a CNC machine at my makerspace, and so cut the panel myself from aluminium sheet, and then used a vinyl cutter to make black vinyl stickers to mark the outputs.

You can open the SVG with a text editor to see the exact dimensions and locations of everything. In case it’s not obvious: the red outlines in the SVG are for cutting, and the black ones for printing, if applicable.

Hmm having trouble sourcing the 81-GRM21BR61E226ME4L caps. Anyone got any ideas where I can get some from, or suggest alternatives?

Hrm, looks like both Digikey and Mouser are currently out of stock. GRM21BR61E226ME44K is the same component in different packaging… and also out of stock. Any ceramic capacitor with the same footprint, capacitance and temperature coefficient, and the same or better voltage rating should work fine, though.

Thanks for the kind words, everybody!

Anyone looking to build a few extra modules for other people: please do! It’s a good way to bring the unit cost down a bit. But, please make at least one for yourself before you commit to making any for others, and do note that the design is currently in, let’s say, public beta. It could conceivably interact strangely with some other modules. If that sounds fine to you, and you’re okay with possibly desoldering and replacing a few components later, go for your life. If not, wait a bit.

I’m just curious - is there a need to use 0.1% resistors as spec’d? I feel like I typically only see that choice made in designs meant to handle 1V/oct CV processing.

The resistors are what determine the gain per-input and per-output. Their absolute values are not too critical; the actual values used (in the BOM) are up to 1% off the ideal values (in the schematic) for a -3 dB pan law.

The values should be well-matched, though. For instance, the two 140k resistors can’t be too different, or the center channel will sound, well, off-center. Would using 1% resistors be good enough? Maybe! Try it and see what you think?

(I did a quick experiment in Audacity, but there’s too much confirmation bias at play for me to know whether I can hear a difference or not.)

This is a great idea! I’m going to order some boards this weekend, and maybe knock up a pcb panel for it too. If anyone in Australia wants a spare let me know

@bmoren and I are working on a 2HP version!
Here is the front panel design: