pset_seq is a simple norns mod that lets you sequence script psets.

you can install pset_seq and then activate the mod in SYSTEM > MODS > PSET_SEQ. after activating for the first time you need to restart SYSTEM > RESTART.

after installation you can activate the sequencer by going to PARAMETERS > EDIT > PSET_SEQUENCER.

In the PSET_SEQUENCER sub-menu you’ll find the following parameters to control the sequencer:

CAVEAT
to change psets with midi program changes, the midi port selected in the PSET SEQUENCER params sub-menu cannot also be selected for sending other midi commands (i.e. from the main script that’s been loaded). 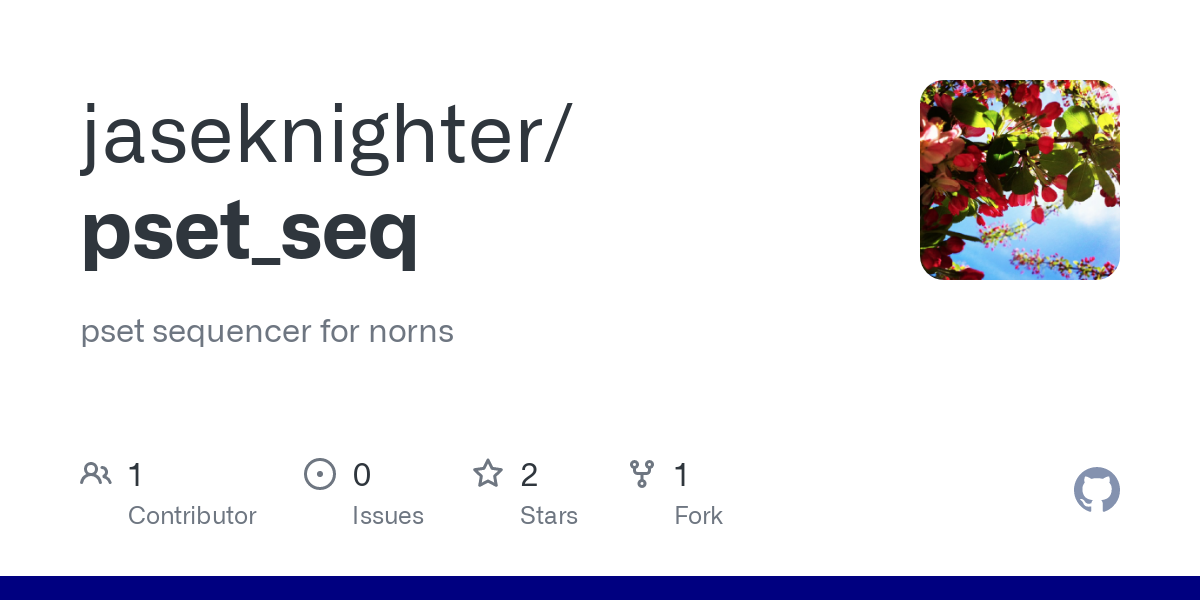 pset sequencer for norns. Contribute to jaseknighter/pset_seq development by creating an account on GitHub.

this is a great idea!

Awesome idea to make this a MOD. Perfect for Colorwheel and Moonraker

really excited about this, thank you!

absolutely incredible @jaseknighter . I love this idea, thanks for effectively bringing it to every script

Earlier today I was combing through the forum looking for a way to midi map Pset… so a big, big thank you for this.

thank you for the very kind words @Justmat, @mlogger, @fourhoarder, @infinitedigits, and @howzero. this code has been sitting in the flora script for quite some time and i’m really happy to see it more accessible for you and others to take advantage of.

this is CRAZY awesome!

great to have the pset sequencer available for every script now. big thanks @jaseknighter !

Thanks a lot! This will definitely be useful in lots of situations.

thanks to @mlogger for identifying a couple of bugs related to changing the clock tempo, first, and last params. i believe these are now fixed in a new version i just committed to github.

after updating the mod, remember to restart so the changes take effect.

inspired by Using Norns live. How to change scripts and presets quicker? is there a world where there’s still a “sequence”, but rather than bars & beats controlling progression thru the sequence, midi messages (ie program change) advance thru the sequence?

@21echoes, the ‘load pset’ param already can be midi mapped to control the loading. tho maybe that isn’t as precise as a program change…

EDIT
i found some code to detect a program change. i’ll see if i can get this coded into the mod sometime this evening.

EDIT #2
ok, this was more difficult than i expected but i am happy to report that i now have a much better understanding of how the midi.connect api works.

i’m sure there are more elegant ways of coding this, but the pset_seq mod now supports changing psets via midi program changes.

two new parameters have been setup to support this:

note: the value sent in the program change message needs to be within the range set by the first and last params.

caveat: if i understand correctly how the code i’ve written is working, the midi port selected in the PSET SEQUENCER params sub-menu to send midi program changes cannot also be selected for sending other midi commands by the script the mod is modifying.

Made a lil video for installing this for a friend.

Maybe someone else will find it useful.

I’m looking to integrate pset_seq into my sequencer colorwheel. The low-hanging fruit implementation is to add a grid page to colorwheel that allows the user to modify pset_seq_beats_per_bar and pset_seq_beats on a per-pset basis (this way you can have one extravagant pitch collection play for 14 beats, two beats of a ‘target note’ pitch collection with a more limited range, and then 6 beats of something else extravagant, etc etc etc, rather than a perpetually-symmetrical harmonic rhythm).

To facilitate this, I’ve added a ‘local’ variant of each of these params to cw, and I’m looking to have their pset_seq equivalents update whenever the active pset changes. I tried dropping a params:set('pset_seq_beats', params:get('local_pset_seq_beats') in after line 256, but it’s not working as expected. Is there another point where I might drop this line to get the desired results, or am I way off, @jaseknighter ?

@yams, thank you for sharing this video.

if so, rather than creating ‘local’ versions of the params, i imagine you could try removing the pset params you want to change with each pset (e.g. pset_seq_beats) from the list of pset exclusions. you’ll find this list on line 328 in the sequencer’s mod.lua file:

oh wow, I hadn’t gotten to the ‘fully integrate them’ stage. I think I understand what you’re suggesting.

To set that up, is it just “drop the lua file in the lib folder, include it in the includes, init it in the init”. Then do the above thing with the default exclusions?

the way mods are created, you can’t just drop in their code into a regular script, however, you should be able to use the version built into flora:

if this doesn’t work, i’d be happy to help investigate the issues.

As you know, I’ve got it up and running! Thanks so much for all the help

I dug your cw track on the thread. Thanks for sharing

I’ve got an idea though, and I’m wondering if there’s a reason this wouldn’t work:

I’d probably also want to go through and conceal UI aspects of pset_seq that are no longer functional once I get this working.

Does this seem like a solid set of steps to carry out, or are there hiccups I may be missing?

@yams, i’m really glad you enjoyed the track i shared on the cw thread, i was really happy with how it turned out.

in terms of your idea for an alternative way of setting values for the sequencer, rather than extending the value for the beats param (step #1 above), i would probably create another param to set the sequence mode (e.g., loop mode for the existing method and record mode or something like that for your new method). other than that, i think your approach is solid. please do reach out if you hit any roadblocks implementing this. i might even replicate your brazen heist of my code and bring your new sequencing code back into the main pset_seq mod codebase.

I have two problems with external MIDI sync. First, the pset sequencer does not start when syncing via MIDI and when using program change to change the psets, the „mod midi in“ port jumps to “None” at the first program change command. Any ideas?