Hi. I’d be interested in controlling the native Csound instrument (granular looper) of Nebulae with my USB MIDI controller. How do you think that would be achievable ? Is it “just” changing several lines of code in the Csound file and plugging the USB cable in the front port ? Thank you.

just installed your firmware with WiFi support, such a handy thing.

Could you tell if the latest version on GitHub is the same that is on patchstorage?

I want to add @alext version on top of it, but not sure if her fork is current enough

I sold my nebulae a bit back, so not sure how “current” current enough is but you are probably better off looking at a diff and making the changes yourself. or finding someone else who can, or something like that

thanks (and for the firmware)! that was the original idea, but github says that your branch is some 50 commits ahead of theTechnobear fork, so i decided to check here

do you use any other granular module instead of the Neb, if i may

I don’t, I’ve been out of music for a little while, especially modular. I’m looking forward to the successor to clouds, I think that will be interesting and closer to something I want. The neb just never felt very “playable” to me, and I wrote an .instr that emulated clouds very closely, but the boot time and size and the perceived inelegance of the neb lead me to sell it.

someone mentioned in another thread that the nebulae is a rasberry pi on the back with the hdmi ports and everything. is this true? can someone post a pic of the back of their module? intrigued.

It is true. Here is an image from Google. Mine looks the same. 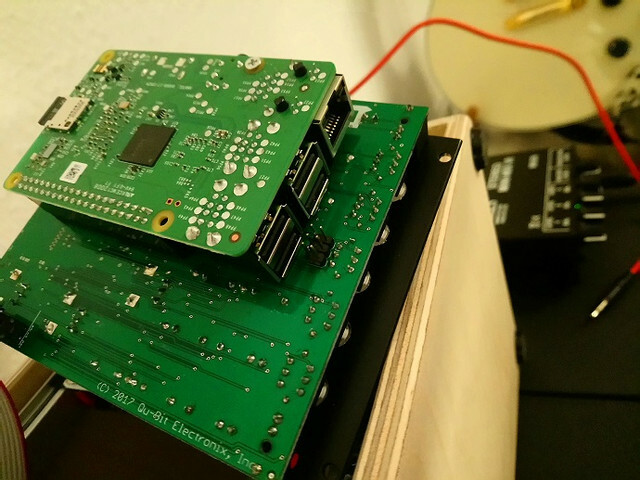 HA, interesting. Wonder why they didn’t go with the stick like what’s in norns. also explains the high power consumption

There is some reasoning behind the use of a regular Pi in this post:

The compute didn’t really exist at that point (we were doing stuff around 2012 right when the Pi first came out). Even if it was available, I don’t think we’d know how to use it. We were music students at music school with no engineering backgrounds, so there was a lot figuring stuff out as we went along. While less elegant, using the Pi board gave us a simple solution which yielded more knowns than unknowns. It got the job done quickly. QuBit has of course evolved quite a bit as a company, and…

That’s a great example of how imperfect/pragmatic solutions can get things done (with great success when you see how QuBit has evolved since!)

Realizing I’m not doing nearly enough with having Supercollider in a box (or Eurorack module in this case). Here’s a patch for using the JPverb UGen:

Hi Donny ! Same issue is driving me crazy. But I undertand to coding and have no time to start learnig it right now. Would you share your instrument with those modified lines please ? Thanks a lot !

Hey There!
Sorry its been a while since I’ve owned a Nebulae, I don’t have these files anymore.

Thank you so much for this patch. I’ve installed and I’m trying to understand it.

Just a few questions if you or other user could confirm…
You describe a relation between Mutable Clouds knobs/buttons and Nebulae knobs/buttons.
Is what Start knob in Nebulae==Position knob in Clouds?

I wonder if this scheme that I’ve prepared includes all modes and combination. 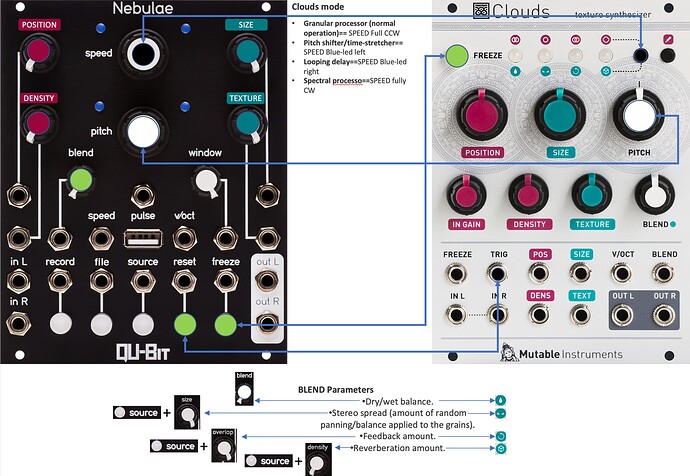 Switch source. Turn the input volume up and record. Once you’ve got something you’d to save hold file and tap freeze. Leads should blink and file should be saved. Latest firmware is required.

Call me crazy but……
Can I load Norns on that pi???
That would be incredible

I’m not even sure if the nebulae uses a pi 3b. If it doesn’t, then it’s probably a flat no. But even if it does, you would need to run a very custom version of norns to get it even talking to nebulaes DAC/ADC, yet alone accepting button and knob input.
You would also need to do lots of fancy stuff to convert a 3 button 3 encoder extremely screen reliant operating system to something that worked with only two encoders, and a bunch of pots and buttons, with only 4 RGB LEDs for visual feedback.
So if it was a pi3b, you could install norns on the actual pi, but it would sit there doing nothing, trying to communicate with non existent screens and encoders.
Considering I can’t even tell what script I’m opening/running without a screen, nor edit any of that scripts settings, I really can’t imagine a situation where norns on a nebulae would be fun.

You could however port supercollider based norns scripts like grandchild or Mx synths to nebulae, and map their controls to nebulaes interface yourself.

The nebulæ does have an HDMI output on it if one wanted to get really fancy with it.

A fun tip for the built in csound granularlooper patch in the Nebulae v2. The phase vocoder’s phase locking is on by default and can be turned off. Phase locking reduces the reverberant quality of phase vocoder sounds by making adjacent channels more phase coherent. (I believe it is the Miller Puckette method implemented in csound’s mincer.) Anyway, for my use I prefer the sound with it turned off. To me it sounds less synthetic. (but more reverby)

Change the kphaselock parameter to 0 and upload to the instr directory.

Brilliant idea. I really wish you could do more to modulate the phase vocoder side.