Adapted from ash/angl after being heavily inspired by @dan_derks to have a poke around scripts (thanks!) and from @infinitedigits and his work on granchild. rangl is a small arc controlled granular player with four tracks. It is based on angl but adds support for

norns, arc, and the Glut engine (comes with ash).

Press K3 to switch modes. The modes are

speed: adjust the speed on the four tracks. Hold K2 and touch arc
to set speed to zero. 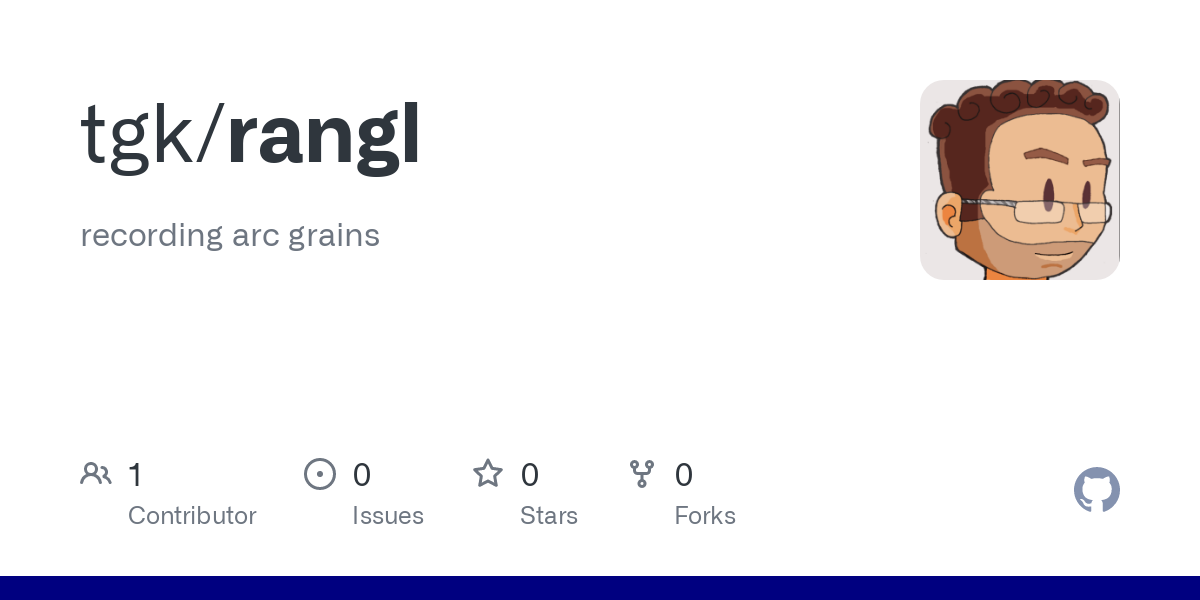 recording arc grains. Contribute to tgk/rangl development by creating an account on GitHub.

or install from maiden:

person, if you only knew how many hours i spent googling and deciphering prior bits of arc code to try and understand a way to do this…the only way i can communicate that is that i last posted about this in may of 2019 and i am still thinking about it

wildly, i actually have an extremely similar bit of code in a WIP script of mine and still somehow never made the connection that i didn’t actually need to understand physics in real life to make the wheels slow down. bah

thanks and congrats! definitely will try to check it out

Thanks! I did consider getting out some more serious stuff that more closely modelled friction in the real world but in the end I think worked out better since this solution is so much easier to read for humans

wowowow! super nice layering + manipulation in your demo + yesss you opened the flood gates with those spinning wheels!!! super glad to have a clean Lua example to point to!!!

what a sweet setup, a beautiful demo and really neat concise code! don’t have an arc to play with this, but I loved seeing all of this

Thanks @infinitedigits - the code is very heavily inspired by your live recording work and wouldn’t have been possible (or at least not as clean) had it not been for your work. Much appreciated!

in LaTeX, you type \langle angle brackets \rangle with “\langle” and “\rangle”, so I guess if I (or anyone else) does their own spin on this very cool!! script, we know what to name it

This is so very fun, thank you for creating and sharing it!

I am having a lot of fun with this script. Thanks so much. Now I need a usb footswitch. Unless there is a way to hack in the threshold recording like in cheat codes2.

Uh sorry I’m not familiar how cheat code works. I have yet to acquire a128 grid

oh, it just uses the built-in system polls to track amplitude and calls a specific function when a threshold is crossed (exemplified in oooooo as well + was the inspiration!)

While implementing this in a script I noticed that if I don’t place the poll setup inside the init() function I can’t start the poll. So placing this

within the init() function makes it work. Is this meant to be like that or am I missing something?