I got 17 14 Fairchild FJN3303R transistors which I’m prepared to send to anyone in need. More details here: http://oree.storijapan.net/praxis/fairchild/. I’m not interested in trading them – I was donated these units to pass them onwards for free. This made me curios about digital heritage and the preservation of the inner logic of electronic components.

If you have a digital heritage or chip preservation anecdote to share I’d love to hear it.

More on chips at llllllll:

I wish this place still existed… it was already closed down the first time I walked past, Andy Bolus told me he went in there once trying to find interesting chips and they basically just told him to get out. 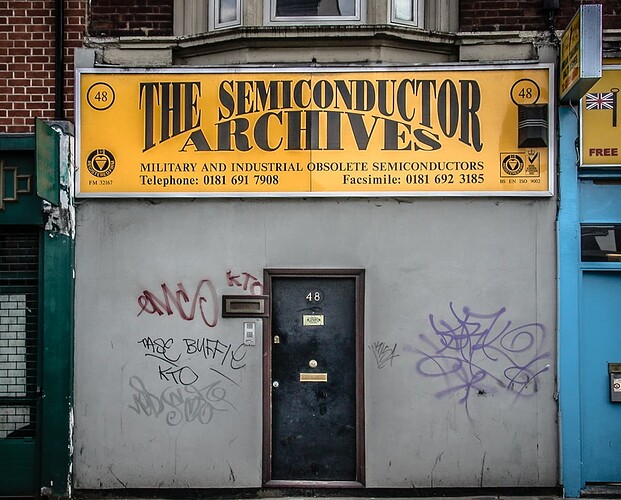 also, makes me nostalgic for being on Bruce Sterling’s “Dead Media Project” mailing list back in the day http://www.deadmedia.org/

One technology that is definitely dead is Control-

electronic musical instruments and connecting them with CV

based sequencers. Basically. these were very, very simple

analogue computers that stored a short pattern of notes

and durations and looped through them with some

programmable variations. The only people doing anything

with this technology are analogue enthusiasts, who have to

I used to go to Sim Lim Tower in Singapore which has a bunch of surplus electronic component places. Some of the old ladies running the stores knew all the part numbers and subtitutions by heart. My best find was a bunch of CA3280’s for cheap. Now they have been reissued, my retirement plans have been dashed.

I think Sterling’s been wrong a few times.

Digging the term “professional garage futurist” from Sterlings text. Also feeling the necro-aspect of past media – There is something sinister in old tech. Loving the idealism of the manifesto, particularly their view on intellectual capital. Here is one for necro-media too: irational courier service, intended for organizing delivery by travellers. There is a bunch of non-nostalgic resources there’s too.

To be fair he didn’t write that particular post! (can’t remember if he even used to actively post on there but the project did originate with him)

There was also Garland Brothers and a very shady salvage shop a few doors down. The area was well known for electronics, with Siemens being based in Woolwich since the middle of the 19th century (yes that’s the 1800s).

I saw Sterling do a pretty disastrous paid talk/discussion years back (the topic was 3D printing/futurefab maybe?) at which it was clear that he had done zero prep.

When the audience finally started to get a little frustrated, he covered by saying something along the lines of “you guys are the experimenters… you should tell me what’s next!” 🤦

Picked up a few LM3909 on ebay a while back, odd obsolete IC dedicated to very low power LED-flashing. I think that’s what they used on that Pink Floyd CD with the flashing led. Got them because Reed Ghazala mentions them and has used for audio purposes, I’ve yet to try tho.

I have a small collection of rare chips and semiconductor devices. My favourites are Microsystems International 8008 and 8080 uPs, 1702 EPROMs and 1103 drams. It’s a little known fact that MIL had a cross licence with Intel back in the 1970s. A friend of mine worked there back in the day and gave me some demo boards he had designed. Kind of wish I had the boards now - would be cool to get a vintage 8008 machine working again.

tom jennings fan club. we first met at the hacker meetup (pre-machine-project project called c-level in china town in LA) where i demo’d the first working 16x16 grid prototype in… 2002? we talked a lot about (uhm) shift registers. several encounters since, he’s been very generous with his knowledge.

there’s a cool interview with him re fidonet in the bbs documentary (there’s only one still, right?)

Just remembed how I got those 1702 EPROMs. I was working as a co op student in the lab at Bell Northern Research and they had a couple of duff devices that wouldn’t program correctly so they gave them to me. There were bad bits that would erase but couldn’t be programmed. I tested them to find the bad bits and tweeked my 8080 code so the binary matched the locations of the bad bits!

We have it so easy now. In the early days of electronics you had to design with devices that weren’t very reliable and often had large parametric variations between individual devices.